New York (CNN Busienss)Boeing is planning to call 27,000 employees back to work next week in Washington state to begin building airplanes again.

The company said the workers are due to return in a phased-in process, with some starting as early as Monday. Most should be back at work by Friday, April 24. Boeing said it will take steps needed to protect their safety.
“The health and safety of our employees, their families and communities is our shared priority,” said Stan Deal, president and CEO of Boeing Commercial Airplanes in a press release. “This phased approach ensures we have a reliable supply base, our personal protective equipment is readily available and we have all of the necessary safety measures in place to resume essential work for our customers.”

The decision to restart production comes as airlines have seen demand for air travel come to a virtual halt. Airlines are grounding many of the jets they already own as they slash their schedules by 70% to 90%.
Earlier this week tracking service Circium estimated there are now nearly 14,000 jets parked by airlines around the world, representing 63% of the global fleet. Boeing reported that customers canceled orders for 150 jets in March, and 41 were canceled in February. Airlines are also deferring delivery dates for jets they are keeping on order.

On April 2 Boeing announced that it was offering buyouts and enhanced pension benefits to encourage employees to leave the company voluntarily.
CEO Dave Calhoun said at that time that the offers were made “to reduce the need for other workforce actions,” suggesting that the company may be looking at layoffs. Boeing had 161,000 employees at the start of the year, with roughly two-thirds working for the commercial airplane division.
Calhoun told employees the offers were made because of the belief that it would take years for the airline industry to recover from the current crisis. In announcing plans Thursday to restart production, Calhoun repeated that view.
“As you’ve heard me say before, we’re in uncharted waters. The impact of this global virus will change our business for years to come,” he said. “But we’re doing what it takes to emerge from it strong and competitive.”
He also said that both the airlines and the aerospace industry would need government help to get through this crisis. Boeing is seeking government loan guarantees, but not the direct government grants that the airlines will receive.
Boeing’s announcement comes on the same day that President Donald Trump announced a three-phase plan to ease restrictions put in place to combat the coronavirus and to restart many closed businesses.
As a major defense contractor, Boeing made nearly 30% of its revenue last year from sales to the US military. It is also awaiting approval from the US Federal Aviation Administration for approval for its best-selling jet, the 737 Max, to fly again. Getting approval for the Max, which was grounded in March 2019 following two fatal crashes that killed 346 people, is crucial for the company. The grounding has so far cost the company an estimated $19 billion.
Boeing will again start to build the 747, 767, 777 and 787 jets. The 747 and 767 are built today only as cargo planes for commercial customers. For the time being, the company production of the 787 Dreamliner jet will remain halted at its factory in South Carolina. But it will restart work at a defense facility in Heath, Ohio.
Boeing said it will also start preparing to resume production of the 737 Max in Washington state. Production on that jet was halted in January for reasons unrelated to the coronavirus. 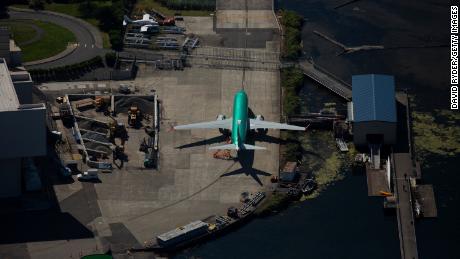 Boeing announced on March 23 that it was halting work in Washington state following the death of one employee who worked in its Everett, Washington, plant from the coronavirus. It announced Friday that it would begin production again in Washington state of two military aircraft that it said were deemed essential to national security.
Among the new safety procedures that Boeing will have in place when work resumes will be staggered shift start times to reduce the flow of employees arriving and departing work; floor markings and signage reminding workers to maintain physical distance from one another; a requirement that employees wear face coverings; and employee wellness checks at the beginning of every shift and voluntary temperature screening at many manufacturing locations.
Source: Read Full Article