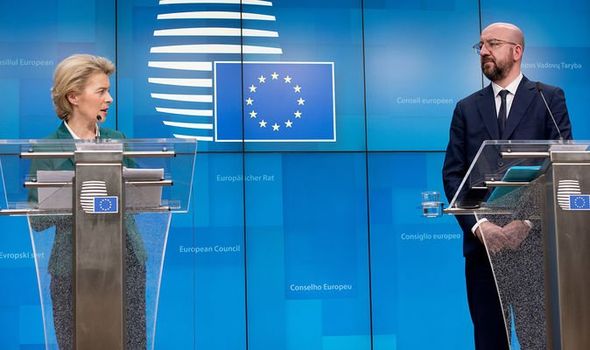 He then warned EU citizens would “lose trust” in the bloc if it does not act together. The health crisis has “revived potentially explosive, simmering tensions,” he continued, adding the bloc’s future was “certainly” at risk if it did not come up with a joint response to combat the deadly outbreak.

He said: “Its resilience has once again been put to the test. The lack of solidarity observed in the early days of the crisis, namely towards Italy and Spain, provoked deep resentment, and these [ill-feelings] will come out at some stage.

“An uncoordinated response is currently the biggest danger for Europe.”

The 27-member bloc has struggled to present a united front in the face of the epidemic, with countries disagreeing over how much financial aid was needed, fighting over supplies of medical equipment and imposing border controls inside what is normally a passport-free zone.

In addition, its economy has been battered by the pandemic as national governments impose strict lockdowns that have paralysed business activity and put normal life on hold.

French Finance Minister Bruno Le Maire was quoted as telling the feuding ministers, according to an official who participated in the virtual talks: “Shame on you, shame on Europe. Stop this clownish show.”

A persistent stand-off between a camp of financially ailing southern EU states led by Italy on one side and the Netherlands acting as the bulwark of the fiscally conservative north on the other was blocking progress.

The ministers put off an especially touchy discussion on a solidarity fund that would be paid for by European partners jointly borrowing on the financial markets.

Sometimes called “coronabonds,” this proposal was strongly rejected by Germany and the Netherlands and ministers agreed to pass the idea over to EU leaders, who will meet by videolink later this month.

Mutualised debt is a red line for the Netherlands, Germany, Finland and Austria; while Italy, France, Spain and several other countries believe that the extraordinary scale of the pandemic requires such a decision.

Berlin and its allies argue any European rescue plan should use the eurozone’s existing €410billion (£358 billion) bailout fund, and say the bloc should wait to see the effects of the massive monetary stimulus already unleashed by the European Central Bank.

German Finance Minister Olaf Scholz said the bloc was capable of handling the economic fallout from the crisis “using classic instruments like the European budget”.

The EU has already relaxed limits on state aid and public spending to help member states combat the slump and restart growth.