Europe is headed for a steep recession amid weeks of ongoing rows that laid bare the 27-member bloc’s disunity in the face of the coronavirus crisis. And now an expert has warned the EU could be plunged into another debt crisis, like the one seen in 2009.

Simon Baptist, global chief economist at consultancy The Economist Intelligence Unit, predicted the bloc’s third-largest economy Italy and Greece, which recently clawed itself back from financial ruin, would be a the centre of it.

The stricken Mediterranean countries remain the biggest threat to the future of the EU despite a number of years of gruelling recession and austerity imposed from Berlin and Brussels.

He told CNBC: “I do think we will see some issues there, possibly we could see a euro zone crisis come back with countries like Greece or Italy likely to be at the centre of that.” 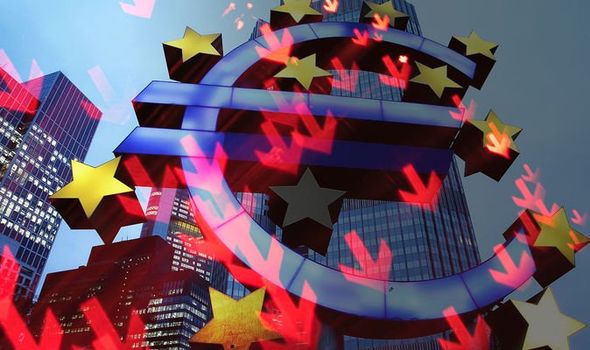 Mr Baptist warned a number of countries could default on their debt in the coming months as governments are under pressure to increase their spending limits to counter the economic damage caused by the COVID-19 pandemic.

He said: “A lot of emerging markets are reliant on international investors, international financial flows to get the funding to run a budget deficit, they find it harder to borrow in local currency — although there are a few exceptions.

“At the moment, with this big turn to risk aversion in international markets, even though there may be some emerging world governments that would like to spend more, they’re not going to be able to get funding.”

It comes after EU finance ministers last week agreed on a package of measures worth half a trillion euros to cushion the blow of the coronavirus pandemic.

However it left unresolved the most contentious question of how to share the financial burden that has so bitterly divided them.

The deal left matters open to further arm-wrestling between the divided member states, whose national leaders will meet via video conference on April 23.

The agreement includes almost unconditional use of the euro zone’s European Stability Mechanism (ESM) bailout fund for loans to governments, a scheme to subsidise wages so that firms can cut working hours rather than jobs, and a plan for the European Investment Bank to step up lending to companies.

However, ministers kicked into the long grass the question of how to pay for a temporary recovery fund for Europe because it goes to the heart of a disagreement over jointly issued debt.

This had been the stumbling block all along, pitting a camp of financially ailing southern states led by Italy against the Netherlands as the bulwark of the fiscally conservative north.

The EU has already relaxed limits on state aid and public spending to help its 27 member states combat the slump and restart growth, and the European Central Bank has approved a €750 billion bond purchases programme to keep credit cheap.