Expedia Group, Inc. (EXPE) reports earnings after Wednesday's closing bell, with analysts expecting a loss of $1.29 per share on $2.15 billion in first quarter 2020 revenue. The consensus would mark a 22% revenue decline compared to the fourth quarter of 2019, with the coronavirus pandemic spawning a major calamity in air travel and hotel occupancy. Even so, Expedia had a tough time meeting Wall Street estimates well before the crisis, with frustrated customers walking away and booking trips directly from airline, hotel, and car rental web sites offering better deals.

The travel giant noted pressure as a result of the pandemic about a month before President Trump shut down air travel with Europe but failed to realize the extent of the damage. The first sign of trouble came on Feb. 25 when the company released details of a restructuring plan that included the elimination of 3,000 jobs. Expedia withdrew 2020 guidance less than three weeks later due to an expected impact "in excess of the $30 million to $40 million range," followed up a week later with a $1.9 billion loan to pay the bills.

In April, Chairman Barry Diller warned that Expedia would spend just $1 billion for 2020 advertising, compared to $5 billion in prior years. The move reflected deep pessimism about a rapid return to air travel, given the ongoing threat of infection and a second wave this winter. The stock is now trading at about the same level it did at that time, highlighting extremely oversold technical conditions after the first quarter slide. Special Note: Diller is also chairman of Dotdash parent IAC/InterActiveCorp (IAC). 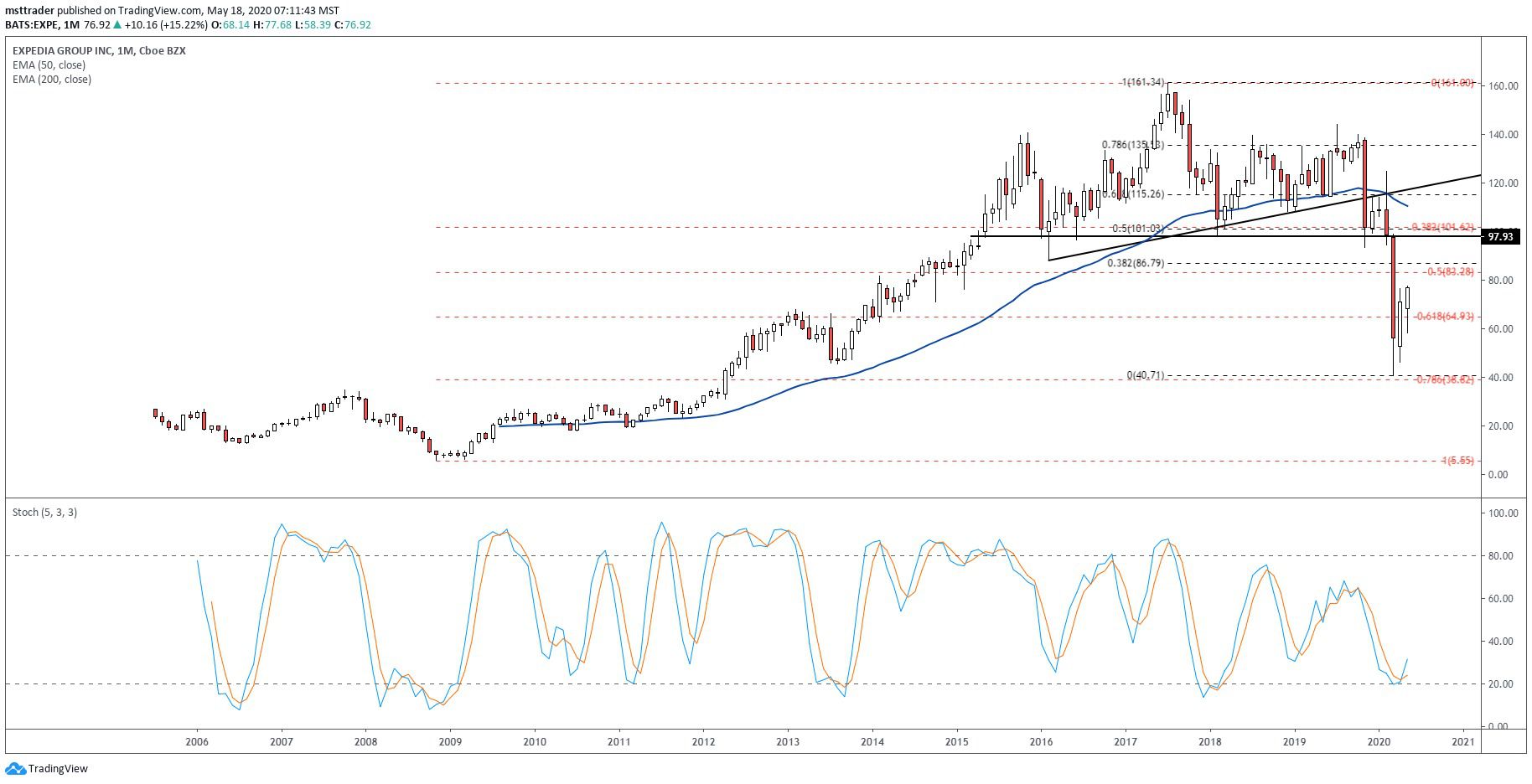 A 2012 breakout caught fire, lifting in three rally waves into July 2017's all-time high at $161.00. The stock sold off to a two-year low at $98.52 in February 2018 and held within that trading range until November 2019, when a poorly received third quarter 2019 earnings report triggered a breakdown, followed by a recovery attempt into February. That effort failed in March, confirming a four-year head and shoulders breakdown and new resistance at the neckline in the upper $90s.

The March sell-off ended within two points of the .786 Fibonacci retracement level of the nine-year uptrend, marking a high-odds location for a long-term low, ahead of a shallow uptick into May. The bounce has now mounted the .618 retracement at $65, which is vulnerable to a retest if the earnings report triggers an aggressive sell-the-news reaction, which appears unlikely because the company's financial woes have been well documented.

The monthly stochastic oscillator reached the oversold zone in March and crossed higher in April, predicting six to nine months of relative strength. In turn, this could support an eventual test at the head and shoulders neckline, which has narrowly aligned with the .382 rally retracement and .50 sell-off retracement levels. Conversely, a major reversal before reaching that level will greatly increase odds that the March low breaks and the stock gives up the last tranche of the long-term uptrend.

Expedia Group reports first quarter 2020 earnings after the closing bell on Wednesday, with well-documented and discounted financial problems lowering the odds for a sell-the-news reaction.

Disclosure: The author held no positions in the aforementioned securities at the time of publication.