The Treasury raised £6.1bn after UK government loans in two separate auctions were three times oversubscribed, the highest demand since 2017.

Reflecting a recent flight to financial safe havens, investors were willing to accept a yield, often referred to as the effective interest rate, on a three-year loan of just 0.204%. A lower yield reflects a higher price.

The Debt Management Office, which oversees the sale of UK government bonds, said the fundraising was the first stage of a scheme to secure at least £45bn this month to support government spending.

Investors have fled stock markets since the coronavirus outbreak was classified as a pandemic by the World Health Organization last month, preferring to put their funds in major bond markets. 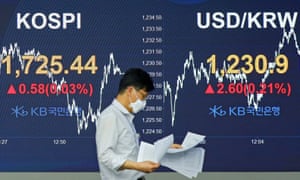 The global bond markets, which handle hundreds of billions of trades every day, are where governments and companies go to borrow funds from investors. They also act as a secondary market to value loans already advanced, which is reflected in the yield.

At the outset of the Covid-19 outbreak, bond markets froze as investors panic bought highly rated government bonds and the number of sellers shrank.

The US Federal Reserve, the Bank of England, the Bank of Japan and the European Central bank, which oversee the largest debt markets, stepped in to expand the number of bonds on offer and promised to meet demand while the crisis continued.

Demand has been supported by the Bank of England’s pledge to “create” £200bn of electronic funds to purchase more bonds as part of its quantitative easing programme, adding to the £435bn of assets on its balance sheet.

Paul Donovan, the chief economist at UBS Wealth Management, said the UK was in a strong position to maintain its fundraising to meet extra spending.

“The UK is still a large market for bonds and sterling is still a reserve currency behind the dollar and the euro. And the UK is not different to any other country in needing extra funds to support extra spending. It is not an outlier,” he said.

“The UK response to the coronavirus outbreak is arguably more coherent than many other countries, making it attractive to investors,” he said.

Government borrowing this year could increase by up to three times, to £175bn, according to the Institute for Fiscal Studies, though the figure depends on the length of the current lockdown and the extent of the damage to the economy.

A pledge to pay 80% of the wages of people who would otherwise be laid off during the downturn, and to self-employed workers unable to find work, is expected to cost at least £10bn and possibly as much as £60bn.

The sharp economic downturn, which economists say could be the worst since the second world war, will also add to borrowing as tax receipts plunge.