Martin Nolan, the executive director of Julien’s Auctions, explains why authentic items from the iconic grunge band’s brief career are sought after more than ever by music collectors.

A guitar smashed by Kurt Cobain is expected to shatter records when it hits the auction block.

Julien’s Auctions’ annual "Icons & Idols: Rock ‘N’ Roll" auction, which is taking place in New York City, features the taped-up instrument. It’s considered to be a piece of grunge history among some music historians, and it’s estimated to be worth $200,000 to $400,000.

The 1973 Fender Mustang was used during two 1989 shows when Nirvana performed in Chicago and Wilkinsburg, Pennsylvania. At the second show, the frontman smashed the guitar during the band’s finale performance of the song "Blew." 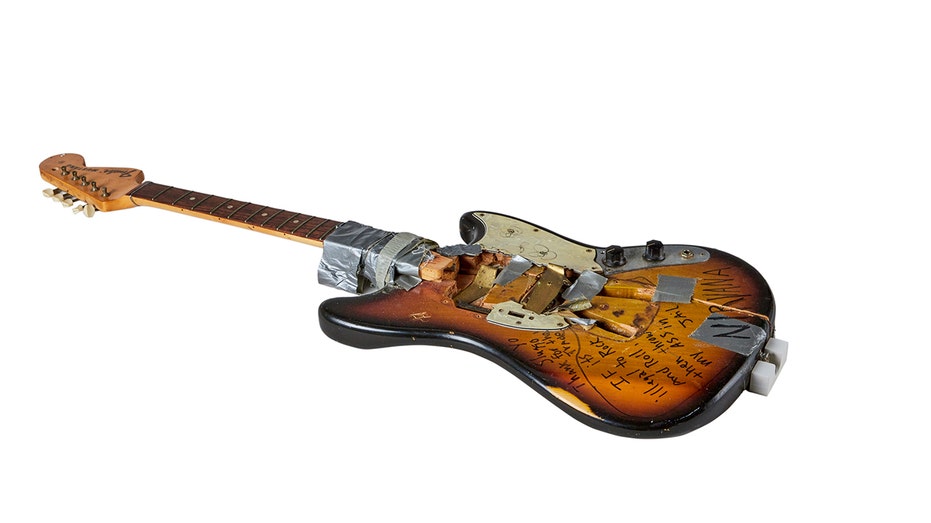 "’Bleach’ was their first album, and after that, they went on tour to very small locations throughout the United States," Martin Nolan, the executive director of Julien’s Auctions, told FOX Business.

WHY KURT COBAIN'S '90S CARDIGAN IS TRENDING AS WFH STYLE

"Kurt just … enjoyed breaking guitars," Nolan chuckled about the late singer’s signature move. "He loved that showmanship. That was part of his shtick when he was on stage performing. He got great joy from doing that. This guitar was the guitar that he broke that particular night in Wilkinsburg, Pennsylvania."

"It’s just one of the incredible items we have at the Hard Rock Cafe this week."

Cobain ran out of guitars after smashing two in just a few days on tour, Forbes reported. According to the outlet, he traded the damaged instrument to Sluggo Cawley from the band Hullabaloo. Cobain wrote on the guitar, "Yo Sluggo, thanks for the trade. If it’s illegal to Rock and Roll, then throw my a– in jail." He drew two flowers on the pickguard, signing off with "Nirvana." 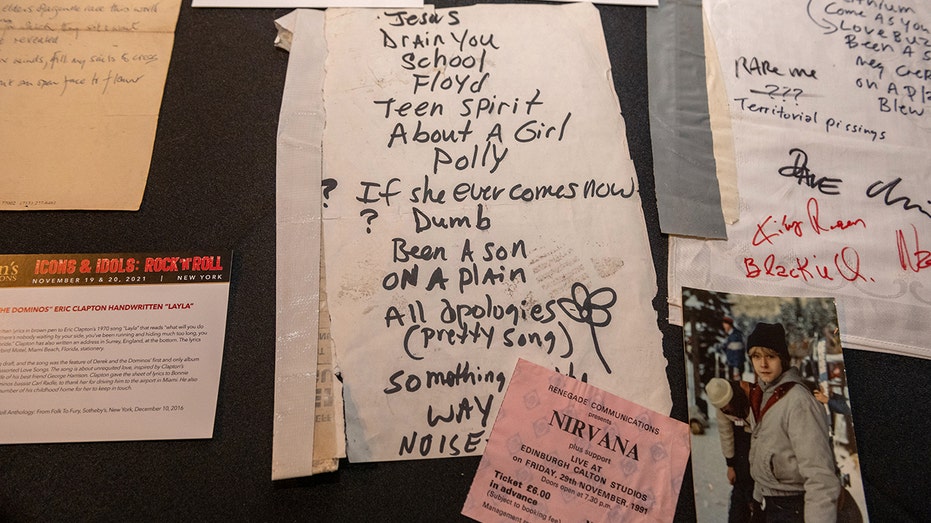 Authentic Nirvana items, especially those associated with Kurt Cobain, are getting harder to find. This 1991 concert setlist, handwritten by the late singer, was featured in last year’s auction. (Alexi Rosenfeld/Getty Images / Getty Images)

Cobain passed away in 1994 when he was 27 years old. Nolan said that while Nirvana memorabilia has grown in demand over the years, it's become more difficult to find authentic pieces.

"People that were fans of him are actually the people that have the financial [means] to own items," Nolan explained. "So, big money is coming in to Nirvana items. It’s getting harder and harder to actually get items … the guitar he played on MTV’s ‘Unplugged' sold for over $6 million, which is a world record. The guitar that he played in the ‘Smells Like Teen Spirit’ video sold for $4 and a half million. This is serious money. And people really want to own something from Nirvana, from Kurt Cobain especially." 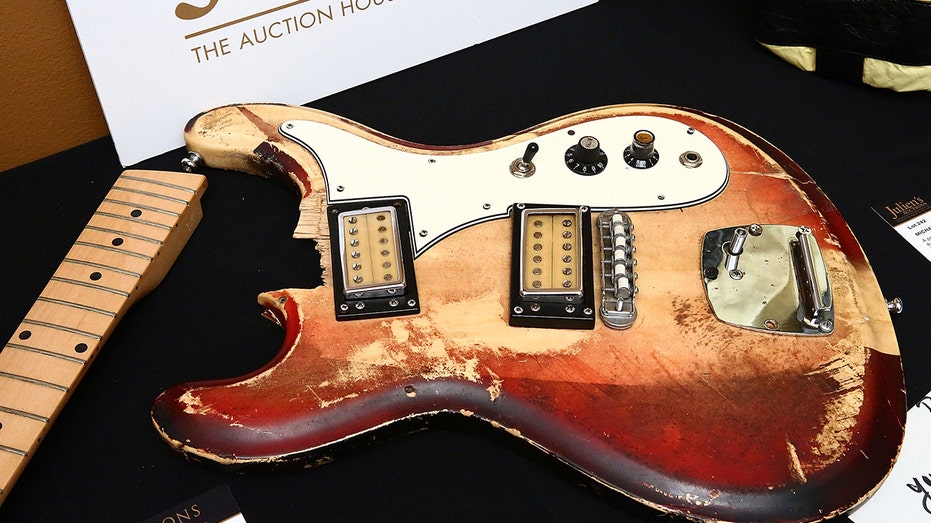 Kurt Cobain’s smashed guitars are highly sought-after among collectors. This electric guitar destroyed by the singer in 1989 during a concert in Hoboken, New Jersey, hit the auction block in 2016. (Astrid Stawiarz/Getty Images / Getty Images)

"It is getting harder and harder to find, especially when you think about what people are paying to own these iconic pieces that will continue to grow in value going forward," Nolan continued. "And that’s one interesting thing about memorabilia right now. It’s considered an investment vehicle. It’s a cool factor. You own something really cool, that has a great story. And then in the years to come, chances are you will sell it for much more than what you paid today." 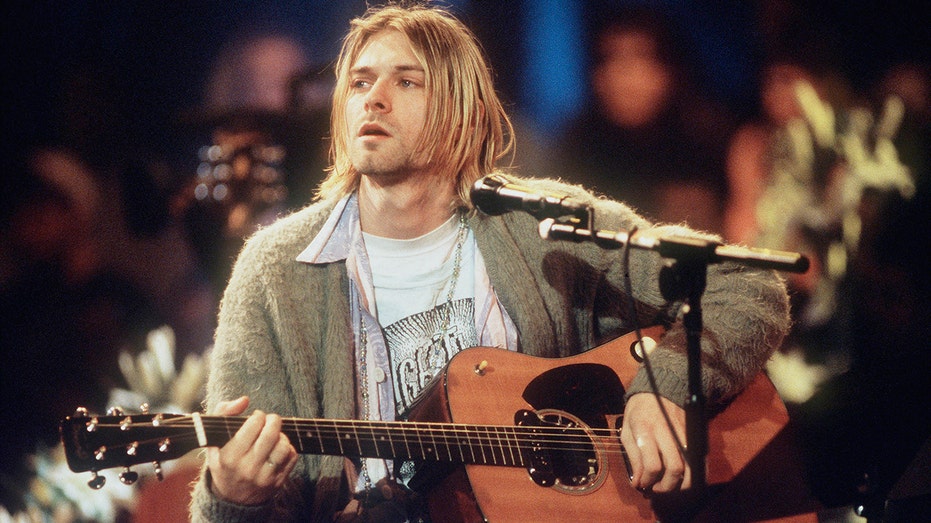 Guitars that were played and smashed by Cobain are favorites among collectors. Two instruments that were destroyed in 1992 and 1994 previously sold for more than $150,000 at auction.

Cobain reportedly had a net worth of $50 million when he died. According to reports, that has reached a whopping $450 million in recent years.

"Nirvana’s career span was very, very short," said Nolan. "That translates to very few items they would’ve used and played and worn on stage. The green cardigan that he wore for MTV’s ‘Unplugged’ was sold a couple of years ago for $334,000. We sold a setlist that Kurt wrote in Pennsylvania on a pizza plate. He had a slice of pizza, then he wrote out the setlist on that plate. That sold for over $22,000, which is incredible. But that tells you how collectible [these items] are." 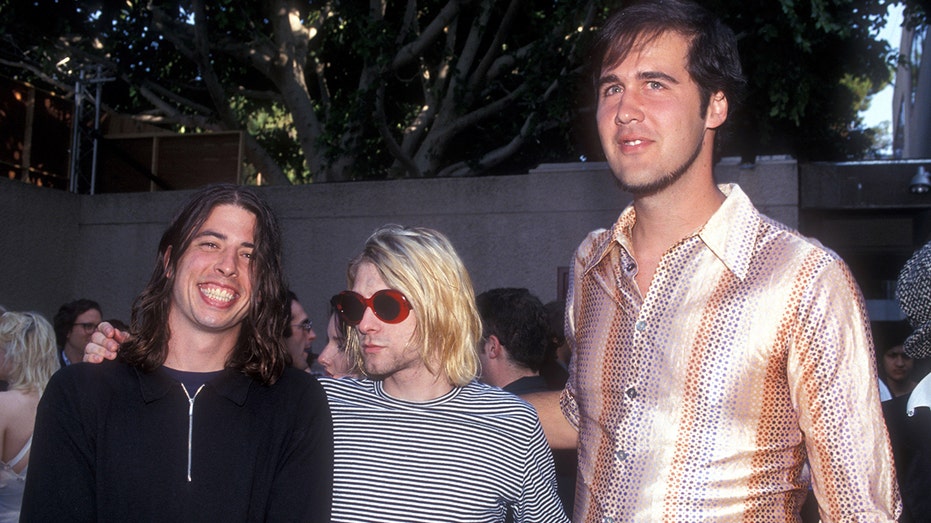 From left: Dave Grohl, Kurt Cobain and Krist Novoselic of Nirvana. Cobain passed away in 1994 when he was 27 years old. (Kevin Mazur Archive/WireImage / Getty Images)

"If you go back to the grunge era, the kids that were in college had no money, but they loved grunge," Nolan said about the rock genre of the ‘90s. "They loved the message that Nirvana represented. Now they’re at a stage where they have disposable income. They want to own … something. They’re nostalgic. They want to take a trip down memory lane and own that guitar."

"And museums love to own these items… When people look at these items, they go back to an era when they were happier… People want to own something tangible, something that you’ll enjoy for years to come." 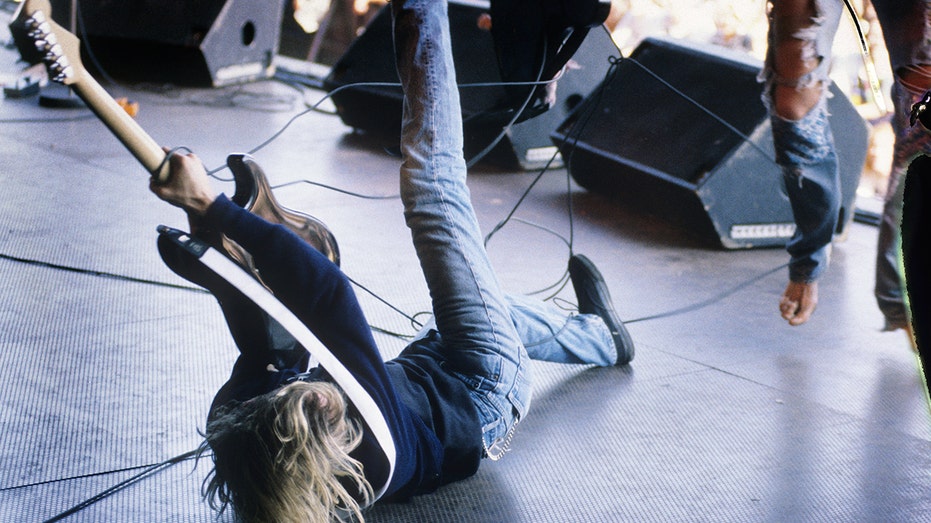 More than 1,500 lots are included in this year's auction. Glasses worn by John Lennon are estimated to sell for more than $80,000. A beehive hair topper worn by Amy Winehouse, a grand piano owned by Bob Dylan, an electric guitar from Prince’s collection and a shirt worn by Elvis Presley are among the numerous highlights bidders can expect.

"Every item tells a story," said Nolan. "And we all want to cling onto the story, that memory."