Just after 7.30 on Friday morning, the arrivals hall at London Luton Airport burst into life following a 10-day shutdown due to the coronavirus pandemic. More than 100 passengers arrived on Wizz Air flight W6 4301 from the Bulgarian capital of Sofia, on the airline’s first scheduled commercial flight since the crisis.

Most of those arriving were seasonal farm workers on their way to fruit and vegetable farms across the UK. Others said they had come to work on building sites, as lorry drivers or in kebab shops.

There were also members of British-Bulgarian families, who had found themselves trapped in Bulgaria when the coronavirus struck and borders closed.

Among the first through the arrivals hall was Sakak, a 35-year-old man from a village near the capital, Sofia, who asked not to disclose his surname. He and all the other passengers were wearing masks provided by the airline. 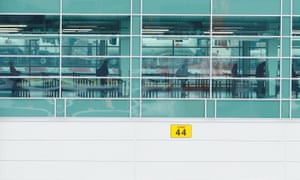 “I need to work, I need the money,” Sakak said when asked why he had chosen to fly from Bulgaria, where there have been relatively few cases, to the UK, which is one of the worst-affected countries in the world on a per capita basis. “I come to work on the farm in the UK every year; I make the money for my family.”

Sakak said he was “a bit” concerned about the high rate of Covid-19 infection in the UK, but said “it will probably be the same all round the world in the end”. He added: “I come from a tranquil village in the countryside and there is no corona there.”

British Airways to cut Gatwick operation and lay off 1130 pilots

There have been just 1,541 confirmed Covid-19 cases and 66 deaths in Bulgaria, according to John Hopkins University coronavirus research centre. That compares with 177,454 cases and 27,510 deaths in the UK.

Sakak is on his way to work on a farm in Maidstone, Kent. “I work as a driver taking people to the fields to pick raspberries and strawberries,” he said.

While the airport is open, it is missing the noise, queues and shopping opportunities we have come to expect when traveling. Just two flights are scheduled to arrive at Luton on Friday (both Wizz Air flights from Sofia) bringing in a few hundred passengers, which compares with a pre-pandemic average of 49,000 passengers. 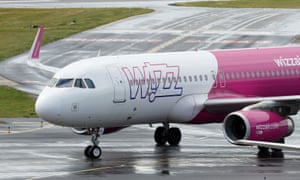 There is nowhere to buy a cocktail, beer or even a coffee as all the shops are shuttered. Most of the car parks are closed, but two hardy bus drivers are on hand to drive the new arrivals to Luton airport train station. Optimistic Addison Lee drivers are offering one-way fares to central London for £96.

A Warwickshire farmer in the arrivals hall said he was waiting to greet seven seasonal workers hired to pick vegetables. The farmer, who declined to give his name, said that if eastern European workers did not come to work in the UK this year “acres of food will rot in the fields”. He said it had already proved much harder than usual to hire workers this season. Only four of the seven workers he was expecting arrived.

Alissa Kotsant, 22, a psychology student from Ramsgate, said she had travelled to Bulgaria to see her family before the virus struck and had found herself stuck there. “There is more virus in the UK than Bulgaria, but my life is here,” she said. “I had to come back.”

Kotsant said she did not feel afraid during the flight despite being closely confined with lots of other people and unable to maintain a 2-metre physical distance, as advised by the government. 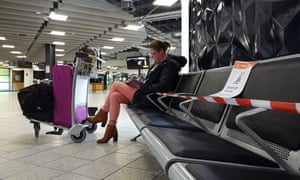 “It was fine,” Kotsant said. “There were no sick people on the flight, and we all wore masks. You could smell that they had just cleaned the plane.”

However, neither the airline nor the airports measured passengers temperatures to check for signs of fever, a key symptom of the viral infection.

Kotsant said the flight was almost full, and that Wizz Air had not restricted travel in middle seats to create more space between customers.

EasyJet, Emirates and Delta have suggested they will leave middle seats empty when coronavirus travel restrictions are lifted. Ryanair has said it will not resume flights if it is unable to sell tickets for the middle seat, as it will make it much harder to turn a profit. Iata, the global airline association, expects government measures to enforce social distancing on flights.

Owain Jones, the managing director of Wizz Air UK said: “As we restart selected Luton flights to provide an essential service to passengers who need to travel, our primary concern is the health, safety and well-being of our customers and crew. The protective measures that we are implementing will ensure the most sanitary conditions possible.”

The airline said cabin crew are “required to wear masks and gloves and will distribute sanitising wipes to each passenger”. Wizz Air said passengers are required to wear face masks although these would only be“initially provided by Wizz Air”.

The Hungarian airline, which is listed on the London stock market, is also restarting flights between Luton and Budapest, Lisbon, Tenerife, Tel Aviv and Sofia, Varna and Burgas in Bulgaria. Several of the routes are open to citizens of the destination countries only.

A London Luton Airport spokesman said: “The safety of our passengers and staff is our top priority and we continue to rigorously implement all government guidance. This includes deep cleaning, the installation of sanitiser across the airport and floor markings and signage to remind customers to maintain a safe distance. We are also displaying the latest public health guidance throughout the terminal.

“Air links for both passengers and freight have been recognised as essential services and the government has asked airports to remain open where possible, to ensure they can continue. The decision to operate individual routes is a matter for each airline.”