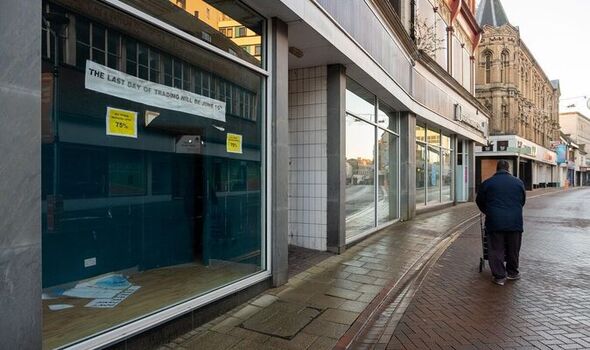 We use your sign-up to provide content in ways you’ve consented to and to improve our understanding of you. This may include adverts from us and 3rd parties based on our understanding. You can unsubscribe at any time. More info

Retail and hospitality chiefs say while they understand the Bank of England’s need to reduce soaring inflation, increasing the base rate of interest by 0.75 percent to three percent will further dampen consumer confidence. They are now warning of a “wave of closures”.

The rate rises have left many people with less money to spend as millions of homeowners find their monthly mortgage payments rising.

It was hoped savings rates would also go up, but most banks have been slow to pass on any increases.

Holly Mackay, chief executive of investment website Boring Money, explained: “Banks are under no compulsion to match the base rate.

“Many of us leave our savings in a current account.

“This is less problematic when interest rates are rock bottom – but at a time of rising base rates and inflation, it hurts.”

Andrew Goodacre, of the British Independent Retailers Association, said: “This continues the current trend for negative news for consumers and businesses alike.

“This latest increase will further dampen consumer confidence and reduce spending at the busiest time of year for retailers.”

Martin McTague from The Federation of Small Businesses, said: “Whatever the justifications for this latest rise, the eighth in a row, its effects will be felt immediately on the ground by small businesses carrying many kinds of debts.”

And hospitality chiefs warned of “a considerable collapse” across the industry if they do not get further support. Michael Kill, CEO of the Night Time Industries Association, said: “Once we get past the ‘golden quarter’ into January and February, we’re going to see a considerable collapse of many businesses.”