Chesapeake was once the nation’s No. 2 natural gas producer, thanks to early bets on fracking. Aubrey McClendon, Chesapeake’s late founder and CEO, was considered one of the leaders of the shale boom that transformed the United States into the world’s largest oil and natural gas producer.
But more recently, bankruptcy rumors had swirled around Chesapeake (CHK) as the company grappled with depressed energy prices, a poorly timed push into oil and a mountain of debt.

The coronavirus crisis exacerbated those challenges. Despite a recent recovery to $40 a barrel, the price of oil has fallen sharply this year because of excess supply and a sharp drop in demand caused by worldwide stay-at-home orders.
Chesapeake’s share price has dropped more than 93% since January, from $172 to $11.85 as of close on Friday.

Earlier this month, Chesapeake skipped interest payments of $13.5 million, according to filings with the US Securities and Exchange Commission. The company had a 30-day grace period before it would be considered in default.
“In the current commodity price environment, Chesapeake is burning cash at the same time production is declining, which is not sustainable,” said Spencer Cutter, credit analyst at Bloomberg Intelligence.
Chesapeake said in a statement Sunday that the Chapter 11 bankruptcy protection would help it to “strengthen its balance sheet and restructure its legacy contractual obligations to achieve a more sustainable capital structure.”
The company posted an $8.3 billion net loss during the first quarter of 2020. It also reported nearly $9.5 billion in long term liabilities, and just $82 million in cash. 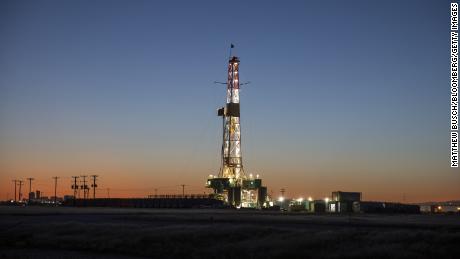 As part of the process, Chesapeake said it has secured $925 million in financing under a revolving credit facility. It also reached an agreement with lenders to eliminate around $7 billion in debt, and locked in a future commitment of $600 million in new equity.
“We are fundamentally resetting Chesapeake’s capital structure and business to address our legacy financial weaknesses and capitalize on our substantial operational strengths,” Chesapeake CEO Doug Lawler said in a statement. He added that the company is positioning itself to “capitalize on our diverse operating platform and proven track record of improving capital and operating efficiencies and technical excellence.”

Chesapeake, founded in 1989 with an initial investment of $50,000, and has long been known as a major natural gas producer.
“For the US shale sector, there has been no bigger disruptor than Chesapeake,” Alex Beeker, principal analyst at Wood Mackenzie, said in a statement Sunday.
Continued cheap gas prices persuaded the company to make a big bet on oil, an expansion marked by a $4 billion deal in October 2018 to buy Texas driller WildHorse Resource Development that proved to be poorly timed.
Bankruptcy rumors have swirled around Chesapeake for years as low oil and gas prices made it difficult for the company to repay its pile of debt.
In April, the company’s stock crashed so low that it turned to a 1-for-200 stock split to comply with exchange listing requirements. Chesapeake suspended dividend payments on preferred stock.
In May, Chesapeake warned it may not be able to stay in business because it had “no access to capital” and “uncertain economic conditions” were impacting its business partners.

30% of US shale is technically insolvent

Already this year, 18 oil-and-gas companies have defaulted on their debt, compared to 20 for all of last year, according to a S&P Global Ratings tally from earlier this month.
Chesapeake is just the latest oil company to file for bankruptcy protection.
Former shale star Whiting Petroleum (WLL) sought Chapter 11 in April, marking the first major oil producer to seek bankruptcy since the pandemic struck. Whiting was valued at nearly $5 billion as recently as late 2018.
Diamond Offshore (DO), which conducts drilling for major oil companies including Hess (HES) and BP (BP), filed for bankruptcy protection in late April.

Analysts have warned that dozens more US oil and gas companies may succumb as well.
About 30% of US shale operators are technically insolvent at $35-a-barrel oil prices, according to a recent Deloitte study. The report estimated that the shale industry will be forced to write down the value of its assets by as much as $300 billion.
Source: Read Full Article