There have been several instances of traders dumping fruits and vegetables outside mandis.
Or of farmers dumping produce outside their villages or feeding them to their animals.
Somesh Jha, Rajesh Bhayani and Sanjeeb Mukherjee report.

Ram Bhool grows spinach on his farm in Bakhtawarpur outside Delhi.

Every day he reaches Azadpur Mandi, Asia’s largest vegetable and fruit market, at 6 am, making the 12-km journey in a Tempo.

On ordinary days, he sells 10-odd quintals of spinach in two hours and then goes home.

But these aren’t ordinary days.

Now, he sells barely 4 quintals and waits till evening for buyers.

And then he makes the journey home, on foot.

On Monday, he didn’t come to the mandi; he fed the produce to his cows.

Tejpal (he, like several others spoken to for this article, gives only his first name) is a potato farmer from Islampur village near Agra.

In the last few days, he has thrice tried to transport his produce to mandis in Delhi and Mumbai, but truckers have been reluctant.

Those who were willing demanded twice the usual fare.

Tejpal has now packed his potatoes in gunny bags and stored them under a tree. 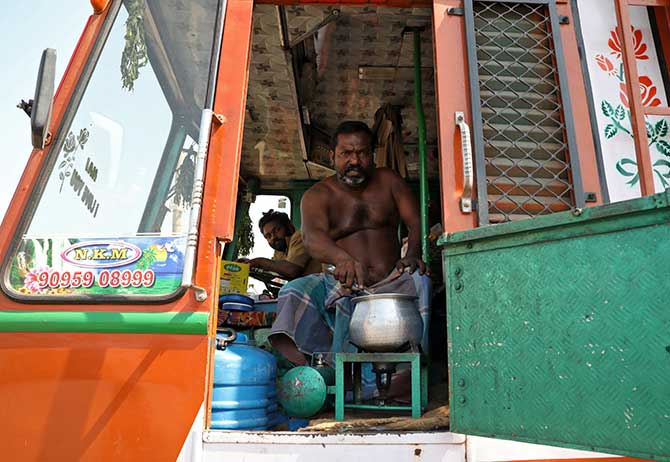 Mausam, a truck driver, reached Azadpur Mandi at 3 am with 16 tonnes of green chillies from Kolkata.

He made the journey in 29 hours, missing by an hour the deadline his employer had set for him to earn a reward of Rs 8,000.

Lighting up a beedi, the 22 year old from Mewat in Rajasthan says the police stopped him at least 25 times on the way.

This was his first trip since the nationwide lockdown was announced on March 23.

“Throughout the journey, I saw poor people walking on the highway — men, women, children. They pleaded with me for a lift, but I was helpless because of the surveillance,” he says.

Not far from where Mausam sits near his truck, Dilip Prasad, a mathadi (porter), is desperately looking for work.

“I would carry vegetables and fruits for wholesalers and retailers up till the mandi gate, and earn Rs 300 by this time. Now, I barely earn Rs 30,” says Prasad, a native of Nawada, Bihar. A highly contagious virus is in the air.

But at this wholesale market, as in most others of the country, physical distance is hardly priority.

Farmers, truckers, labourers, arthiyas (commission agents) go about their jobs, brushing against each other, some with cloth wrapped around their faces.

It’s a struggle for survival, with little support from the State.

From the farmer to the local fruit and vegetable vendor, who pushes his cart to our neighbourhoods after having picked up the day’s supply from the mandi while we sleep, these are the people who are ensuring that food reaches our tables.

Most middle-class Indian homes have not seen a particular paucity of fruits and vegetables, so it is difficult to visualise the struggle it takes to bring them to us.

Or the misery of those who make up this supply chain.

Potatoes and cucumbers are major produce for farmers at Islampur.

They had barely recovered from the unseasonal rains of mid-January when the lockdown dealt them another blow.

It also coincides with a time that the rabi crop was to be harvested.

“Though the government has announced several relaxations, it will not be possible to make up for the losses due to delayed harvesting because of the sudden labour scarcity,” says a farmer.

Wheat, chickpea and mustard are the main crops harvested at this time in Punjab, Haryana, Madhya Pradesh, Rajasthan and Gujarat.

“In Madhya Pradesh and Rajasthan, where the bulk of chickpea and wheat was harvested before the lockdown, farmers are not getting plastic sheets and bags to store them. God forbid that the weather turns bad,” Bhagwan Meena, a young farmer leader from Madhya Pradesh, says over the phone from Budni.

While most state governments have deferred procurement, the Central government has advised growers to delay harvesting as the weather is still cool in parts of North India.

The impact of these decisions, both on the producers and consumers, will be felt in the months to come. 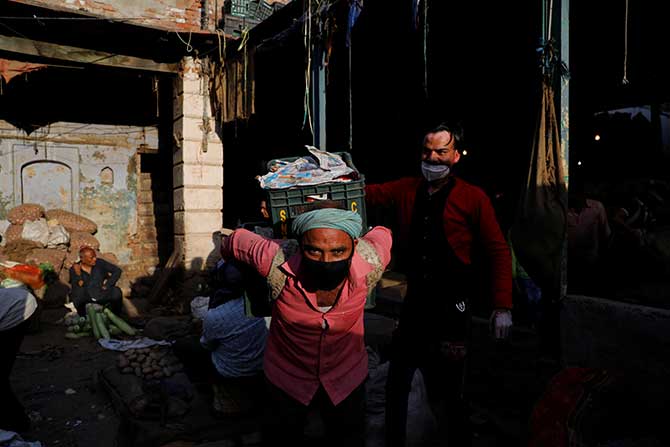 Mumbai declared a shutdown before the rest of India did.

The Agriculture Produce Market Committees, or wholesale mandis, that feed Mumbai and Thane issued permits to traders specifying the quantities of vegetables they could bring in for sale. (The APMC market has been ordered shut since Friday, April 10.)

With hotels, restaurants and roadside eateries closed, the demand for vegetables has fallen drastically.

Traders who would ordinarily buy from farmers and sell to nearby mandis are having to go to distant mandis.

Without any guarantee of finding buyers. There have been several instances of traders simply dumping fruits and vegetables outside mandis.

Or of farmers dumping produce outside their villages, or, like Ram Bhool, feeding them to their animals.

At Igatpuri, on the way from Mumbai to Nashik, dozens of farmers recently threw away bottle gourd, cabbage and whatever else they had grown but couldn’t sell.

In Nashik, India’s grape capital, which produces 12.5 lakh tonnes of grapes (40 per cent of the country’s total) every year, the migrant labour force has left for home.

“So acute is the shortage that we will have to either delay harvesting or make raisins from fresh grapes,” says Kiran Chumbhle, a farm owner and grape exporter.

“Barely 30 per cent of the labour, largely locals, remains and they are charging a lot more.” 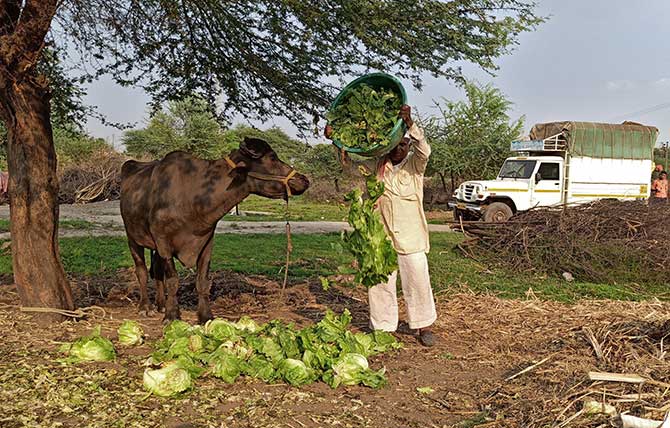 Chumbhle is aware of new farming techniques that can help grapes stay fresh and sweet longer; most farmers are not.

Nor do they have the expertise, ingredients or solvents to make raisins, adds Vasudev Kathe, coordinator, Dabholkar Prayog Parivar, a Nashik-based body of 5,000 farmers working on crop improvement experiences.

The supplies, he adds, aren’t coming from Mumbai due to the lockdown.

“I haven’t seen such a deep crisis in my 35 years of grape farming.”

The Union horticulture department estimates that India’s grape production could fall by 29 per cent, to 2.15 million tonnes.

Maharashtra also accounts for 37.2 per cent of India’s onion produce, some of which is grown in Nashik.

But India’s largest onion mandi, Lasalgaon, 60 km from Nashik, is closed since someone in a nearby area tested positive for COVID-19.

Farmers are now selling whatever little they can to smaller mandis like in Chandvad near Lasalgaon.

The worry is that onion prices could rise as farmers find it difficult to sell their produce in peak harvesting season.

Head over to Mumbai’s Vashi Mandi, which sells a couple of million tonnes of grains and pulses every year.

It offers a lesson in how things can be managed in a pandemic.

“We have initiated a system to control crowding and at the same time ensure that the supply line from farmers and traders remains open for Mumbai city and Thane,” says Nilesh Veera, director, Vashi APMC.

The committee had put a 16-point programme in place (before the APMC was ordered shut). 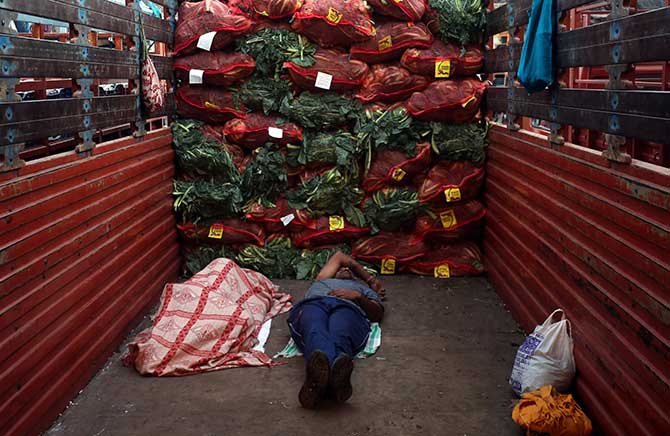 Supply trucks entering the mandi and those heading out to Mumbai city were unloaded and loaded on alternate days.

Only I-card holders were permitted entry into the market yard.

Individual buyers, brokers and others were banned.

All entry and exit points were manned.

A committee of commissioners of all municipal corporations up to Konkan district oversaw the functioning.

Permits for quantities that could be brought into the mandi were issued for the vegetable market at Vashi, which supplies Navi Mumbai, Thane, Mumbai, Palghar as well as the Vasai-Virar region.

Here, too, individual customer entry was banned and the mandi was regularly cleaned.

In Mumbai’s suburbs, retailers are charging more for vegetables even though farmers are selling them cheap.

They say that transport is expensive.

And though household buys have doubled, it cannot make up for the loss of business from restaurants and hotels. 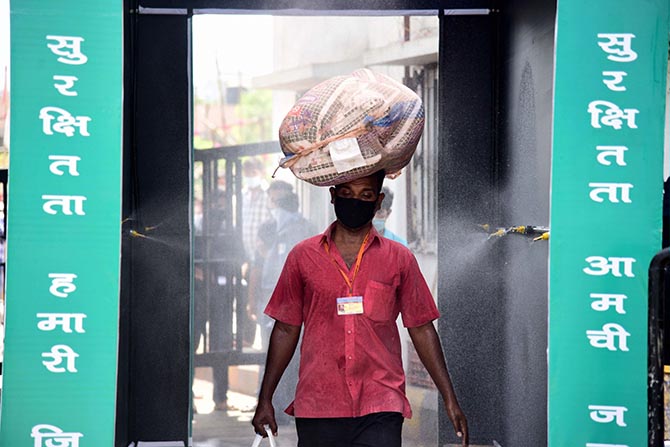 Back at Azadpur Mandi, Arjun, a vegetable hawker, regrets his decision to stay on in the city rather than go to his family in Pratapgarh in Uttar Pradesh.

“I thought I would be able to earn a living since what I sell is an ‘essential item’,” says the 48 year old, a towel wrapped around his mouth and nose.

But with individual buyers staying away from the mandi, earnings have reduced to a trickle.

“Once this lockdown lifts, I will go to my village… to my children.”

The narrow lanes by the mandi where hawkers sold vegetables have also been cleared.

“But the nature of the market is such that maintaining safe physical distance is difficult,” says Manish Singh, a 22-year-old commission agent who buys vegetables from the mandi and sells them to wholesalers and retailers.

It is a risk to personal safety that they are willing to take.