Waitrose is to test fast-track grocery deliveries with the takeaway courier firm Deliveroo as it prepares to do battle with its rival Marks & Spencer, which will finally begin selling groceries online next week.

After almost two decades together, the online grocery specialist Ocado has ditched Waitrose and will switch to selling M&S food from Tuesday, kicking off a fight between the two grocers for the online upper-midmarket.

In a last minute move, Waitrose has unveiled a 12-week trial with Deliveroo, through which more than 500 of the supermarket’s products could be delivered within 30 minutes of five stores. The service will be available from stores including Bristol, Cambridge and Notting Hill, west London, and adds to Waitrose’s two-hour Rapid service, which is now operating from 29 stores and has 23,000 customers.

James Bailey, the executive director of Waitrose, said: “This gives us another opportunity to give our customers a taste of what the future of convenience shopping could look like for us.”

Delivery fee: up to £6.99 depending on timing

Fastest delivery: less than 30 minutes if you live near the Zoom facility in Chiswick, west London

Staff-owned service run from mix of stores and warehouses

Number of products: up to 27,000, about half of which are own-label

Substitutions: average two per order, with option of refund or bigger/better product

Fastest delivery: less than two hours via Rapid service, which operates from 29 stores. Also less than 30 minutes via Deliveroo from five stores from September

While Waitrose is revving mopeds and delivery bikes, Ocado will close two of its three giant robot-run warehouses on bank holiday Monday so it can ship out remaining Waitrose products to food banks and the food redistributor Company Shop. At the same time, thousands of fresh M&S products will be trucked in to join the tins, packets and other less fragile and perishable goods that have been gradually filling Ocado’s warehouses over the last three weeks.

Only those Ocado shoppers close to the group’s warehouse in Erith, south-east London, will be able to receive one of the last Ocado deliveries containing Waitrose products on Monday. 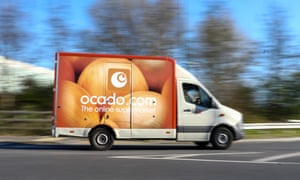 Melanie Smith, the head of Ocado’s retail arm, will be present at one of group’s first deliveries containing M&S food products on Tuesday at about 6am – potentially in a van decked out in the livery of M&S Percy Pig sweets that was spotted on a motorway covered in black plastic before the launch.

Smith said she felt relaxed about the switch from Waitrose to M&S after 18 months of preparations, adding that there had been a “strong level of forward demand” for the move. Despite the gradual unwinding of coronavirus lockdown measures and return to work for many, Ocado’s delivery slots are still selling out every day with all of Tuesday’s snapped up earlier this week.

Bailey, who only joined Waitrose in May, said he was “feeling optimistic” especially as the switch to online shopping during the pandemic had already helped Waitrose replace those Ocado sales. 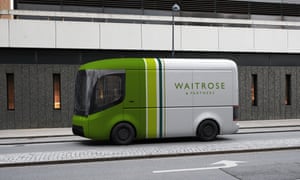 Waitrose, which is part of the John Lewis Partnership, has gained more than 100,000 extra online orders a week – or about 250,000 customers – since lockdown began. Online sales are already at an annualised rate of £1bn, the group’s target for the end of the year. But the retailer is clearly ambitious for more with two last-minute changes this week.

First Waitrose cut its minimum order from £60 to £40, putting it on a par with Ocado. Then it announced the Deliveroo trial.

During the pandemic, the surge in online shopping – which has almost doubled to now account for more than 13% of the UK grocery market – has helped both sides in a high stakes game. 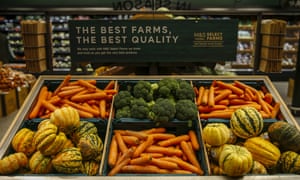 M&S has spent £750m on a half-share of Ocado’s retail arm, to which it will supply 6,000 products – mainly groceries with some clothing and homeware items – as it belatedly finds a way to sell its groceries online. M&S is hoping to ride a wave on which Ocado’s sales rose by 40% during the pandemic after cutting prices and reformulating products to try to match Waitrose favourites. M&S is also playing catch up in the UK’s well-established grocery delivery market.

Waitrose has spent £100m on improving its online business, increasing capacity by 50% during the pandemic as it tries to attract enough shoppers to make up for the sales lost to Ocado. With 85% of its online orders picked up from stores, the retailer appears to have been able to adapt much more quickly than Ocado’s robots to the recent surge in customer demand. A new distribution centre opening in west London at the end of this year will help double the number of delivery slots in the capital, the supermarket chain said.

Bailey said the biggest change would be a more direct relationship with its shoppers. While Waitrose supplied 4,000 products to Ocado, making up about a quarter of the latter’s grocery sales, it had no contact with them.

“Now we’ll be the No 1 connection with customers online and can communicate with them about the brands we sell, our food provenance and all the things that make Waitrose special and different,” Bailey said.

Waitrose’s battle is not only with Ocado and M&S but also Tesco, Sainsbury’s, Morrisons, Asda and Amazon, all of whom are investing heavily in expanding online. Food box firms, such as Riverford, and meal kit services have also experienced massive growth while restaurants and cafes have been closed.

Despite the gradual return to offices and schools, Smith said she did not expect Ocado shoppers to head back to stores. “The hurdle for us is the move to shopping online. Once customers start then they tend to stick online. Competitors have done us a great service switching a lot of people to shop online,” she said.