The impact of fiscal measures announced by the government to contain inflation will be seen in the next few months because of the base effect, reports Indivjal Dhasmana. 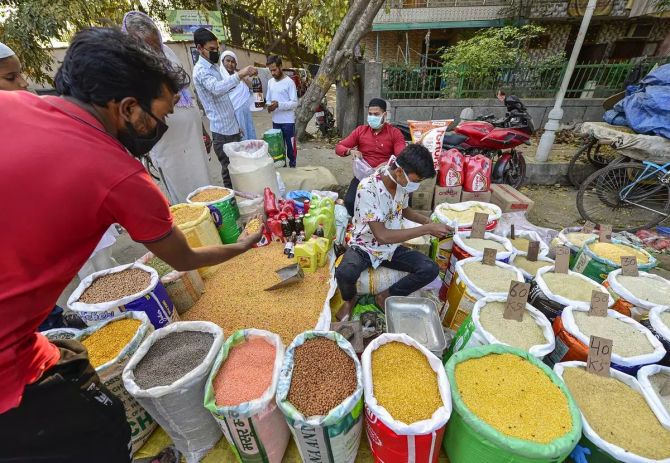 Inflation in sugar, tur, urad, petrol and diesel moderated in June compared to the previous months.

Wheat and flour saw the consumer price index (CPI)-based inflation rate entering double digits at 10.06 per cent in June compared to 9.45 per cent in May.

In fact, inflation in May had moderated from 9.59 per cent in April but is still high.

Wheat inflation was in the range of 5.1 to 7.77 per cent in January-March.

“Monsoon and kharif have nothing to do with wheat. Wheat will now be sown in November and crops will come the next year,” said Aditi Nayar, chief economist at ICRA.

The retail inflation rate in refined oils moderated from around 18 per cent in May to around 15 per cent in June but is still elevated.

The inflation rate for household plastic products, such as water bottles and buckets, was in double digits in the last three months till June.

It has been in double digits since at least January, dropping below ten per cent a tad in March.

However, the June figure was lower than almost 29 per cent in January.

Nayar said the impact of fiscal measures will be seen in the next few months because of the base effect. The base remains quite low compared to the corrected price levels. 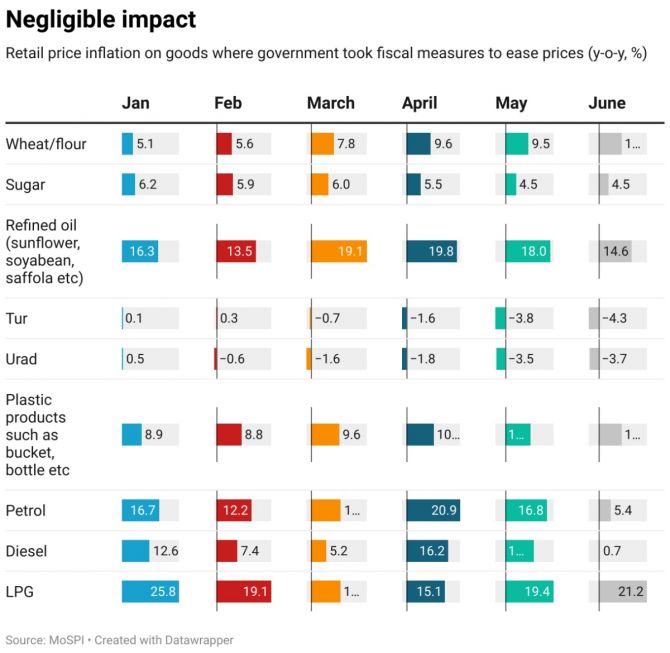 Exact item-wise figures are not available for March-June, 2021.

However, the base in these commodities were quite lower in 2021.

For instance, wheat flour saw the price fall in January, February, July, August and September in 2021.

This implies that the base effect itself would not let inflation rate fall much in wheat and flour.

On the other hand, fiscal measures in sugar, tur, urad, petrol and diesel have yielded results.

Prices of the two pulses are falling in most of the current calendar year.

Inflation in sugar was moderate at 4.45 per cent in June, the same as was in May.

The inflation rate in the two fuels are now quite reasonable at 5.37 per cent and 0.68 per cent in June, respectively.

The government announced a number of fiscal steps after overall inflation refused to come below six per cent since January this year.

Other measures were slashing customs duty on raw and intermediate products of plastics, slashing excise duty on petrol and diesel and Rs 200 subsidy per gas cylinder (up to 12 cylinders) to 90 million beneficiaries of Ujjwala scheme.