While the futures of the airline industry and the manufacturers of airplanes are in peril, Airbus has made a major announcement that it wants to be in the zero-emission commercial aircraft business by 2035. Fifteen years has become the equivalent to a century in the world of gas engine alternatives. Airbus might have saved the announcement until, say, a decade before it planned to reach its goal.

There is some chance that the duopoly of commercial aircraft makers could be broken in a decade and a half. For the time being, the cost to enter the industry must be well into the hundreds of billions of dollars. The only organization that has a whisker of a chance today is China’s state-owned Commercial Aircraft Corporation (COMAC). It wants to build jets so that the world’s largest airplane travel market does not have to rely on America’s Boeing and Europe’s Airbus. Even with the financial weight of the central government behind it, the company has had technical problems. Count it out of the race to build a zero-emission commercial aircraft for now.

The secret sauce for Airbus’s plans is what it calls “hydrogen propulsion.” Glenn Llewellyn, Airbus VP, Zero-Emission Aircraft, said: “As recently as five years ago, hydrogen propulsion wasn’t even on our radar as a viable emission-reduction technology pathway. But convincing data from other transport industries quickly changed all that. Today, we’re excited by the incredible potential hydrogen offers aviation in terms of disruptive emissions reduction.” Hydrogen-powered engines would reduce commercial aircraft CO2 emissions by half, it calculates.

The Airbus description of its engine plans is not terribly specific:

In aircraft, there are two broad types of hydrogen propulsion: hydrogen combustion and hydrogen fuel cells. Airbus’ three zero-emission “concept” aircraft—known as ZEROe—are all hydrogen hybrid aircraft. This means they are powered by modified gas-turbine engines that burn liquid hydrogen as fuel. At the same time, they also use hydrogen fuel cells to create electrical power that complements the gas turbine, resulting in a highly efficient hybrid-electric propulsion system. However, each option has a slightly different approach to integrating the liquid hydrogen storage and distribution system. Airbus engineers have conceptualised integration solutions that carefully take into account the challenges and possibilities of each type of aircraft. 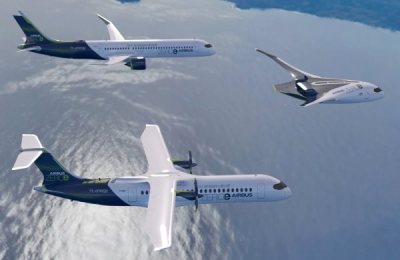 What does the future of large engine commercial jet propulsion look like? Fifteen years is too far away. Electric engines may turn out to be adaptable. Traditionally fueled engines may become much more efficient. Airbus knows that.