China’s economic activity cooled sharply in April as widening COVID-19 lockdowns took a heavy toll on consumption, industrial production and employment, adding to fears the economy could shrink in the second quarter.

Full or partial lockdowns were imposed in dozens of cities in March and April, including a protracted shutdown in commercial centre Shanghai, keeping workers and shoppers confined to their homes and severely disrupting supply chains. 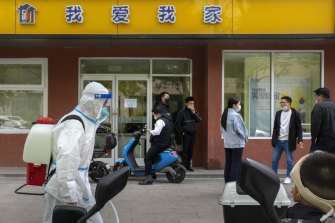 A worker wearing a protective suit and carrying a tank of disinfectant walks along a street in Beijing.Credit:AP

Retail sales in April shrank 11.1 per cent from a year earlier, the biggest contraction since March 2020, data from the National Bureau of Statistics showed on Monday. The reading worsened from March’s 3.5 per cent fall and missed the forecasts for a 6.1 per cent drop.

Dining-out services were suspended in some provinces and China’s auto sales in April plunged 47.6 per cent from a year earlier as car makers slashed production amid empty showrooms and parts shortages.

As the anti-virus measures snarled supply chains and paralysed distribution, industrial production fell 2.9 per cent from a year earlier, notably worse than a 5.0 per cent gain in March and was below expectations for 0.4 per cent growth. The reading was the largest decline since February 2020.

The shock also weighed on the job market, which Chinese leaders have prioritised for economic and social stability. The nationwide survey-based jobless rate rose to 6.1 per cent in April from 5.8 per cent, the highest since February 2020 when it stood at 6.2 per cent.

The government aims to keep the jobless rate below 5.5 per cent in 2022.

Fixed asset investment, a main driver that Beijing is counting on to prop up the economy as exports lost momentum, increased 6.8 per cent year-on-year in the first four months, compared with an expected 7 per cent rise.