Two cheers for the British Wirtschaftswunder. It may not be an economic miracle, but the accelerating recovery now under way is a breathtaking turn of fortunes for the much denigrated Brexit economy.

The UK will probably regain pre-COVID levels of output before the eurozone, perhaps by Christmas. By the end of next year it may even have recouped the entire cross-Channel gap in growth since the referendum. 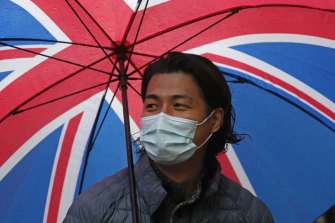 The second-quarter GDP slump exceeded the 12.1 per cent drop in the euro zone and the 9.5 per cent fall in the United States.Credit:AP

Philip Shaw from Investec has pencilled in blistering growth of 7.3 per cent this year, but says it could be over 8 per cent. “We’re trying not to sound outrageous but that is what the numbers are telling us,” he said. The firm has the eurozone pegged at 4.4 per cent.

Upgrades are pouring in. The Swiss bank UBS has raised its UK forecast from 3.8 per cent to 5.5 per cent. Bank of America and Barclays have both raised theirs to 5.9 per cent.

A “very optimistic” Goldman Sachs is eyeing 7.1 per cent, thanks to both early and rapid vaccination. The US bank says press alarmism about a 1.3 million exodus of EU nationals fleeing London is nonsense. “The true net outflow of migrants is closer to the 200,000 mark,” it said. It predicts that many will return soon because jobs are scarce at home. Migrants from Hong Kong will do the rest.

“Everybody has been too bearish on the UK,” said David Owen from Jefferies. “It is going to be a ‘coiled spring’ recovery and we even think the UK will outperform the US in 2022 with 7.6 per cent growth.”

Mr Owen says a powerful inventory cycle is about to kick in as firms restock. This will be turbocharged by £100 billion ($178 billion) of excess savings built up by companies over the pandemic.

It will be further juiced by investment tax incentives that reduce the effective marginal rate on plant machinery to zero for the next two years. Early evidence from the torrid pace of new business formation suggests that the UK is a step ahead of Europe in exploiting smart data technology, and will be a leader of post-COVID innovation.

Europe will rebound too, eventually. There is €500 billion ($771 billion) in pent-up household savings waiting to be spent. But vaccination paralysis in December and January is inflicting its long-tail damage today. April has turned into a lockdown wipe-out. Virologists in Germany, Italy, and France say politicians are fooling themselves in thinking they can reopen fully in May.

The erratic on-again, off-again treatment of the AstraZeneca jab probably delays final reopening by yet another month due to the slower rollout and damage to vaccine confidence. The EU is now trapped by its zero-tolerance policy on rare blood clots, as if it had the luxury of treating vaccines like a routine drug when 3000 Europeans a day are dying from COVID, many from blood clots caused by the disease itself. 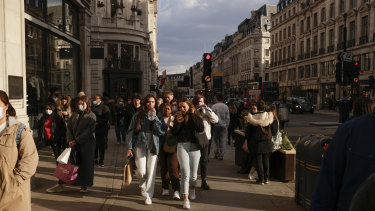 The UK economy has roared back to life.Credit:Bloomberg

It has poisoned the well for Johnson and Johnson’s viral vector jab as well. Capital Economics says the 55 million doses of J&J scheduled for the second quarter amount to 25 per cent of the EU capacity to immunise (given the one shot effect).

The promise of 50 per cent adult herd immunity by July is slipping away, and so is the second summer season for Club Med, with all that this means for pent-up insolvencies and sovereign debt ratios already stretched to the limit.

France has nudged down its growth forecast for this year from 6 per cent to 5 per cent. It is still too high. Spain has signalled a coming downgrade as well. The sorpasso moment when eurozone output surpasses pre-COVID levels has probably been pushed into mid-2022.

What we confirmed from UK data this week is that the headline collapse in trade with the EU seen in January was meaningless. The February figures are unrecognisable. They do not yet offer a “steady state” picture of post-Brexit trade as teething problems fade, but they do refute catastrophist claims.

It will take a generation to reach a useful economic verdict on Brexit. What is clear already is that the incessant high-decibel negativism of the London opinion machine has been exposed as ill-informed and hysterical.

Exports worldwide were down just 2.2 per cent from a year earlier. If that trend were to continue it would imply an annual trade loss of £7 billion or around 0.07 per cent of GDP. It is macroeconomic noise.

Details are revealing. Exports to the EU were down 12 per cent (y-on-y) but over two-thirds of this was offset by a rise in exports to the rest of the world. There was a 20 per cent fall in exports to France but a 38 per cent rise in shipments to Belgium, some shipped from the Humber to Antwerp rather than clogging up the M25 en route to Dover.

It is evidence of trade diversion away from French ports that can no longer be entirely trusted, the cost of Emmanuel Macron’s anglophobe antics. It implies a revenue loss for Calais.

On the import side, the UK is buying less from the EU and relatively more from elsewhere. China’s shipments jumped 71 per cent (partly due to PPE). Imports fell 27 per cent from France, 18 per cent from Holland, 14 per cent from Germany, and 13 per cent from Italy. A pattern is emerging: the EU has chosen to make goods trade with the UK needlessly complicated and is now losing market share to global competitors.

There are signs that UK exporters are adapting to Brexit red tape – because they have to – while EU exporters are more dispersed and less focused. This will get worse when the UK waives the current exemptions on customs controls and reciprocates EU curbs. Europe is likely to see a galloping loss of its once captive UK market. Korea, Japan, China, America, and Mexico will snatch it away

It is true that the UK’s fishing industry has suffered a body blow, but this is a political and community issue. The commercial sums are tiny. Live shellfish exports are worth just £15 million a year. Furthermore, the press narrative has degenerated into caricature. “I don’t think there ever really were piles of rotting seafood in the ports,” said Barrie Deas, head of the National Federation of Fishermen’s Organisations.

Mr Deas says there are eager buyers of British fish in the vast Asian market, once the logistics are right. “Before COVID, the market for frozen crab was expanding dramatically in China,” he said.

Nor is it beyond the wit of man to put more of Britain’s catch on British tables. “We’re being inundated with emails from people asking where they can buy fresh fish but the big supermarkets don’t give it prominence the way they do in Spain and France. We’re missing a trick,” he said.

It will take a generation to reach a useful economic verdict on Brexit. What is clear already is that the incessant high-decibel negativism of the London opinion machine has been exposed as ill-informed and hysterical. The British economy is doing just fine. Time to change the stuck record, my friends.

Start the day with major stories, exclusive coverage and expert opinion from our leading business journalists delivered to your inbox. Sign up here.