Riots, rubber bullets and renewed restrictions: this was not the winter of recovery Europe’s leaders envisioned when vaccines offered a route out of the pandemic.

Anti-lockdown protests swarmed the likes of Rotterdam, Brussels and Vienna over the weekend, with police turning to heavy-handed tactics of tear gas, warning shots and water cannons. 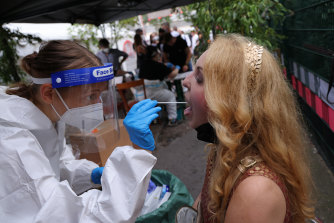 A participant submits for an express PCR test outside the KiKat Club in Berlin. Credit:Getty

Demonstrators venting their anger by throwing fireworks and torching cars have cast a spotlight on the political vulnerability of leaders, just as the threat of new lockdowns push forecasters to cut growth predictions for the eurozone.

“The Austrian [lockdown] raises an obvious question: how severe is the risk that other parts of the eurozone such as next-door Germany may have to follow?” asks Holger Schmieding, chief economist at German bank Berenberg. “Germany contributes 29.6 per cent to eurozone GDP, almost 10 times Austria’s 3.3 per cent. One lesson from the pandemic is that harsh measures cannot be ruled out.”

Economists fear the full national lockdown in Austria will be just the first with Germany now on red alert. It comes as daily cases in Europe’s largest economy hit almost 70,000 last week and the number of patients in intensive care is on a steep upward trajectory.

While Europe is within touching distance of its pre-pandemic output levels following the double-dip recession in 2020, economists warn its recovery could be set back by tightening restrictions affecting Austria, Belgium, Germany and the Netherlands.

These fresh measures risk triggering another slump in GDP, despite economies becoming more resilient to restrictions with every lockdown.

“People might decide that if Christmas is going to be cancelled this year, we’re not going to go and buy a load of stuff for it.

“If you’re a company and you’re thinking about investing, would you invest into this environment when you don’t know for certain how things are going to progress next year?”

He predicts a winter of “slowing growth” in the eurozone and warns there is “no doubt” that another fall in GDP is possible.

Berenberg has cut its overall eurozone growth forecast for the fourth quarter from 0.7 per cent quarter on quarter to 0.5 per cent. It predicts growth will then bounce back to 1.2 per cent in the first quarter of next year but warns there are growing risks from the current wave.

Live economic signals tracked by forecasters – such as mobility data and web traffic – suggest the eurozone recovery has been weakening in recent weeks and risked slipping into reverse gear even before tougher restrictions. Meanwhile, EU consumer confidence fell to a seven-month low in November.

Of the “big four” eurozone economies, Germany is most at risk with case numbers lower and vaccination rates higher in France, Italy and Spain.

A COVID clampdown would only add to pressures already building on the German economy from supply chain problems hitting its car sector and inflation, which the Bundesbank predicts will hit close to 6 per cent.

Berenberg predicts German growth will now stagnate in the fourth quarter while Capital Economics warns that Austria’s lockdown will wipe 1.5 per cent off its GDP if it lasts three weeks.

“We assume that some German regions may have to adopt Austrian style measures but that the bulk of Germany will not fully go down the Austrian route,” Schmieding says.

The Austrian lockdown was likely to cost its economy €117 million ($182 million) a day, with restrictions that are left in place on the unvaccinated costing €41 million a day afterwards, according to Wolfgang Mueller, a professor at Vienna Centre for Electoral Research’s Institute for Government.

Its capital, meanwhile, has become a polarised place with splits widening between pro and anti lockdown supporters.

While Chancellor Alexander Schallenberg only took office in October after a corruption scandal engulfed his predecessor Sebastian Kurz, and he does not face a public vote until 2023, Mueller argues that will not increase the standing of either leader. “The People’s Party campaigned over the summer that the COVID crisis had passed, it was over. That was not quite true,” the professor says.

Governments in Germany and France will also be wary of the spillover political cost of more restrictions.

Anand Menon, director of the UK in a Changing Europe, warns of a rising chance that France’s presidential election next April will start influencing COVID decisions taken by Emmanuel Macron. “If there was a slide back towards something like a lockdown in France with an election looming, that would clearly have an impact but what we’re not really sure about yet is how long it takes for COVID to go into the rearview mirror.”

“It’s clearly a huge, huge downside risk. People might decide that if Christmas is going to be cancelled this year, we’re not going to go and buy a load of stuff for it.”

Christian Odendahl, chief economist at the Centre for European Reform says the “political calculus changes quite a bit” for state leaders facing election. He argues politicians dodged the COVID issue in German elections in September, making a backlash more likely at the ballot box in state votes next year.

But, adds Odendahl, Austria’s mandatory move “will set a precedent for Germany, because Germany and Austria follow each other’s politics and country relatively closely”.

Now, just as they were scaling back stimulus, governments and the ECB may be forced to ramp up economic aid again. Extending support, such as furlough schemes, would mean borrowing billions of euros more while potentially forcing the central bank to print more money to sweep up the region’s sovereign debt.

Widening restrictions will also add to doubts over whether the ECB can announce the tapering of its €1.85 trillion bond-buying scheme in December, with markets already cutting their bets on a 2022 rate rise.

Bert Colijn, at ING, says: “The logical policy decision would be ‘we’ve been supporting [the economy] for such a long time already and hopefully this is the final round after which we can be out of the woods’ but I don’t know if we can be that optimistic at this point.”

As the frustrations of the region’s lockdown-weary public boil over, politicians may be the ones soon paying the price for the latest pandemic setback for the eurozone economy.