Many first-home buyers who bought with a 5 per cent deposit during the past year are likely to be in ‘negative equity’, cutting their options for refinancing and potentially leaving them stranded on excessively high interest rates.

Negative equity is where a borrower owes more to their lender than their property is worth. Banks consider borrowers with negative equity to be particularly risky. If the borrower was to default on their loan, the lender would not be able to recoup the money it is owed.

Borrowers with negative equity are also less likely to be able to refinance with another lender at a more competitive mortgage interest rate. 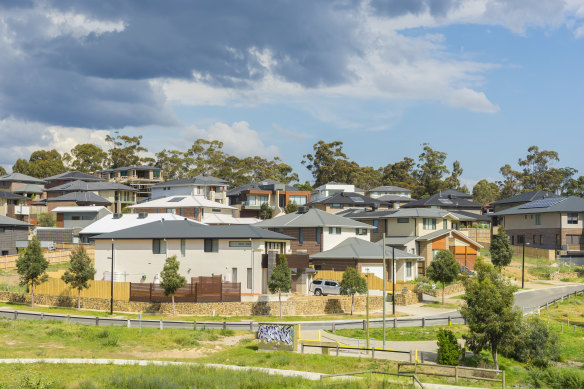 One-in-seven first-home buyers took advantage of the federal government’s low deposit scheme in the 12 months to June 30 this year – up from about one in ten during 2021-22.

Under the scheme, first-home buyers can get a mortgage with a deposit of only 5 per cent, allowing them to get a foothold in the property market earlier than if they had to save for a larger deposit.

But it’s not all bad news for recent first-home buyers in the southern capital. In Melbourne City, which is dominated by units and is popular with first-time buyers, prices are 10.3 per cent higher.

The bounce comes after prices fell heavily in the Melbourne City LGA during the early part of COVID-19, as borders closed and international students were no longer coming to Australia.

CoreLogic figures show prices in some lower-priced areas of Greater Sydney have not fallen by much.

Those first-home buyers who took advantage of 2 per cent fixed interest rates and put down a 5 per deposit in 2021 will likely be rolling off to variable rates of 6 per cent or more when their fixed terms end.

Pete Wargent, co-founder of buyers’ agent BuyersBuyers, says the good news is that with full employment there is currently a job for effectively everyone who wants one.

“We also know that most Aussies will do whatever it takes to continue making mortgage repayments,” he says.

Some economists see a scenario where inflation could stop falling next year and interest rates could even be cut by the end of 2023, meaning lower variable-rate mortgages and those on fixed rates not facing such a big jump in repayments.

Martin North, founder of Digital Finance Analytics, says inflation could stay higher for longer. That may see the Reserve Bank stop increasing the cash rate but not cutting it, with higher mortgage rates to continue for some time.

He says that first-home buyers in negative equity who bought with a 5 per cent deposit and roll off fixed rates to much higher variable rates may not be able to refinance to a cheaper variable rate with another lender.

How to make, save and invest money

Most Viewed in Money