As the world headed into 2022 grappling with the latest virus variant, China unveiled a sharpened version of the Made in China 2025 industrial policy blueprint. Previous iterations may have had nations like the US on edge, but this is the one to keep an eye on.

State planners released a five-year smart manufacturing development plan in late December that aims to digitise 70 per cent of the country’s large enterprises. China will now focus on building and owning industrial robots, as well as upgrading equipment and processes used in the manufacturing sector. 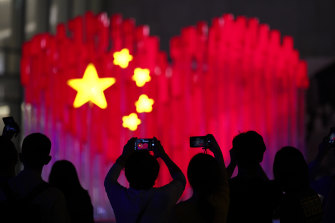 Beijing has acknowledged that to stay ahead and maintain its leading role as a global manufacturing hub, it’ll need to upgrade.Credit:AP

These may not have the same buzz as nanotechnology, new materials or human job-stealing robots — sectors targeted in the last “Made in China” plan. However, the latest blueprint has the potential to help Beijing become the factory floor of the future, with uber-efficient and precise machinery, at a time when the US’s biggest hurdle to competitiveness is just that. With global supply chains in a state of disarray, China’s intent to upgrade its vast industrial production sector and the ecosystem around it to bolster its role as the world’s supplier is shrewd and prescient: Beijing will do better what it already does well.

Core to the latest intelligent manufacturing plan is growing the country’s industrial robotics sector revenue at an annual rate of 20 per cent over the next three years and doubling the density of robots — a proxy for automation adoption. These aren’t just in factories, but also in warehouses, logistical functions and other related areas that make the entire sector operate in a way that raises productivity, including better and more electric cars, batteries and electronics.

In addition, Beijing intends to create small and medium companies that are focused on very specific sectors — what it calls “little giants” — that are globally competitive and essential to industrial technology. In doing so, it also wants to reduce dependence on foreign companies. China’s Ministry of Industry and Information Technology called for improvements in areas like high-precision speed reducers, servo systems, robot controllers and integrated intelligent joints, according to analysts from Daiwa Capital Markets Hong Kong. These are all key components used in equipment for industrial automation that help with motion control and other machine functions.

The global supply chain snarls that have left companies across the world scrambling to produce goods with all the right parts in a timely fashion makes that clear…Viewed through that lens, Beijing’s plan is on point: Keeping the world reliant on China for as long as possible.

While these targets seem ambitious, they are in line with a global trend toward automated factories: In 2021, there were 126 robots per 10,000 employees across the world, up from 66 five years ago. China is by far the largest market — it has 44 per cent of robot installations and ranks 9th in terms of density globally, up from 25th place just five years ago, according to the International Federation of Robots. Meanwhile, the US, with an 8 per cent share, comes in 7th.

Still, just because there’s a plan doesn’t mean it’s a sure-shot. Companies like Estun Automation, China’s largest industrial robot manufacturer, have grown through acquisition of foreign companies rather than with leaps in technology. Those businesses have then been expanded to create supply chains around them. Government subsidies, too, loom large in the company’s earnings. Officials recently said they will encourage merger and acquisition activity in the sector.

It would be remiss to say this is just another attempt by Chinese policy makers to move toward technological innovation, or to develop a blueprint like several other Soviet-style plans the nation has churned out since the 1950s. Instead, Beijing has acknowledged that to stay ahead and maintain its leading role as a global manufacturing hub, it’ll need to upgrade. A ministry official recently said that “there are still gaps and a weak industrial foundation, and the quality, stability and reliability of key components cannot meet the needs of high-performance complete machines,” state media reported.

The US and other nations have been talking up advanced manufacturing, too. Yet limited progress has been made. The global supply chain snarls that have left companies across the world scrambling to produce goods with all the right parts in a timely fashion makes that clear. It’s also put a spotlight on the otherwise mundane role of factories and their workers, shipping, logistics and warehouses, exposing deficiencies in the US industrial complex.

Viewed through that lens, Beijing’s plan is on point: Keeping the world reliant on China for as long as possible.