Top economic officials from some of the world's wealthiest nations reached a broad agreement on Saturday to support a global minimum tax rate of at least 15% in order to crack down on multinational corporations that use low-tax countries to conceal their profits.

Finance leaders from the Group of 7 countries endorsed the global minimum tax rate, along with a proposal to make the world's biggest companies – including U.S.-based tech giants – pay taxes in countries where they conduct business but have no physical presence during a meeting in London.

WHAT IS A GLOBAL MINIMUM TAX RATE, AND HOW WOULD IT WORK?

"That global minimum tax would end the race-to-the-bottom in corporate taxation, and ensure fairness for the middle class and working people in the U.S. and around the world," Treasury Secretary Janet Yellen tweeted after the meeting.

Companies employ a litany of tactics to reduce their liability, often by shifting profits and tax revenues to low-tax countries such as Bermuda, the Cayman Islands or Ireland, regardless of where the sale was made. The practice by American and foreign multinationals costs the U.S. tens of billions of dollars each year, according to the Treasury Department.

Yellen and the Biden administration recently embraced a long-stalled effort to revamp the international tax system, throwing the full weight of the U.S. government behind a broader effort to crack down on tax avoidance by multinational corporations. By getting all countries to agree to a minimum corporate tax rate, the White House is seeking to eradicate certain tax havens without hurting the competitiveness of American firms.

BIDEN'S TAX HIKES WOULD DING US ECONOMY IN THE LONG-RUN, STUDY SHOWS

The worldwide average corporate income tax rate, measured across 177 countries, is 23.85%, according to a recent analysis conducted by the Tax Foundation, a non-partisan organization. Among G7 nations, the average rate is slightly higher: 24%. That marks a significant decline from 1980, when corporate tax rates around the world averaged about 40.11%.

"Since then countries have recognized the impact that high corporate tax rates have on business investment decisions," the analysis said. "Declines have been seen in every major region of the world, including in the largest economies."

For instance, the U.S. used to have one of the highest corporate tax rates in the world at 35%. But Republicans slashed the rate to 21% in 2017 with the passage of the Tax Cuts and Jobs Act, moving the nation closer to the middle of the pack in terms of corporate taxes.

The Paris-based Organization for Economic Cooperation and Development (OECD), a group of 37 mostly wealthy countries, has pushed for years to eliminate corporate strategies that "that exploit gaps and mismatches in tax rules to avoid paying tax." The global minimum tax would apply to companies' foreign earnings, meaning that countries could still establish their own corporate tax rate at home.

The OECD previously estimated that a global minimum could raise revenue by $100 billion.

These are the 10 countries with the highest corporate tax rate: 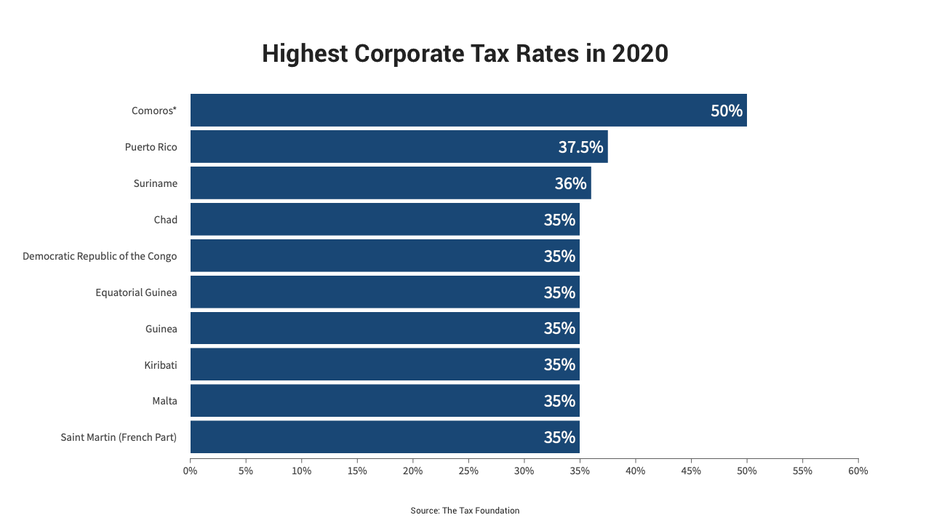 These are the 10 countries with the lowest corporate tax rate: 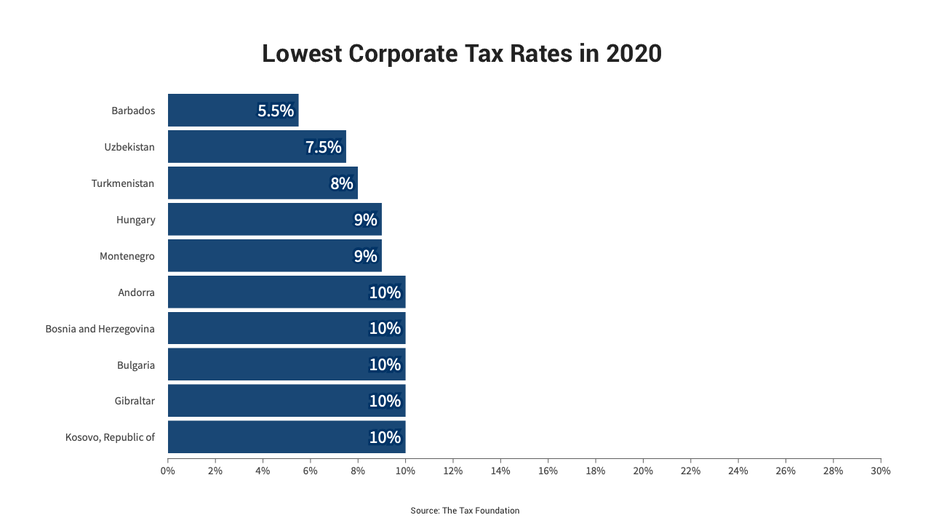