ANZ Bank has settled a case brought by a bitcoin trading platform operator who alleged he was discriminated against over the bank’s decision to cancel his bank accounts because he ran a cryptocurrency trading business.

Canberra-based bitcoin trader Allan Flynn launched action in the ACT Civil and Administrative Tribunal against ANZ and Westpac alleging both banks breached his human rights and discriminated against him by closing his bank accounts because he was a cryptocurrency dealer. Mr Flynn’s case against Westpac continues. 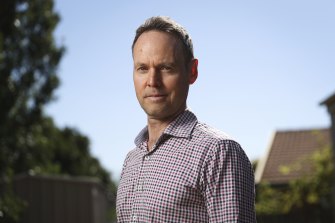 Allan Flynn has chalked up a victory in his debanking battle with ANZ. Credit:Alex Ellinghausen

On Thursday, ANZ prepared a statement on the case confirming it had settled the matter with Mr Flynn without any liability, but gave Mr Flynn the opportunity to reapply for a bank account by stipulating he was not the subject of a lifetime ban.

“The parties have agreed to resolve their dispute and Mr Flynn has withdrawn his ACAT claim. Mr Flynn has not been paid any compensation,” the bank said.

The bank said it closed Mr Flynn’s accounts in January 2018 and then again August 2019 in accordance with its policy of avoiding banking with digital exchange operators because Mr Flynn was engaging in crypto-currency trading using his ANZ bank accounts.

“ANZ acknowledges that it closed Mr Flynn’s accounts because it detected he was operating a
DCE (digital currency exchange), and without seeking information from Mr Flynn about the particular circumstances of his DCE business, including the ML/TF (money laundering/terrorism financing) risks and policies of that business,” the bank’s statement said.

ANZ had been defending the case on the basis that under Section 57N of the ACT Discrimination Act it was not unlawful to discriminate against a person on the grounds of their profession or trade if the transaction was relevant to the person’s trade.

“ANZ further acknowledges that this could, subject to the defence in section 57N, have amounted to unlawful discrimination,” ANZ said in the statement.

ANZ and every other major deposit taking institution in Australia refuses to bank with operators of digital currency exchanges due to concerns over potential non-compliance with money laundering and terrorism financing (ML/TF) risks.

“In 2014, ANZ adopted a policy directed at identifying, mitigating and managing the risk that ANZ may face of its customers and services being involved in or facilitating money laundering or terrorism funding (ML/TF),” the bank said in its statement about the case.

“As part of that policy, ANZ determined that it would not enter into or maintain banking relationships with customers identified as issuers, dealers or exchanges involved in digital/virtual or other crypto-currencies such as bitcoin.“

The settlement deed between the bank and Mr Flynn states that “Mr Flynn is not, as at the date that this deed is executed by ANZ, the subject of a ‘life ban’ in respect of his holding accounts with ANZ.

“Any future application by Mr Flynn to open an account with ANZ will be assessed on its merits as at the time the application is made, and in accordance with any applicable laws or policies, procedures and/or requirements of ANZ as may be applicable at that time.”

Mr Flynn declined to comment on the settlement, saying that “given that it’s very similar to another matter before the ACAT it would be inappropriate for me to comment further”.