The Australian banking regulator’s decision to direct banks to defer or materially reduce their dividends this week was prudent, but probably unnecessary.

The major banks would have been considering reducing their payouts to shareholders with or without the direction from the Australian Prudential Regulation Authority as they seek to conserve capital at a moment of great uncertainty and significantly reduced profitability.

The impact of the coronavirus on the banks is a great unknown. They made quite extraordinary concessions to their business and retail customers; measures that will cost them cash flow and earnings during and well beyond the duration of the pandemic. 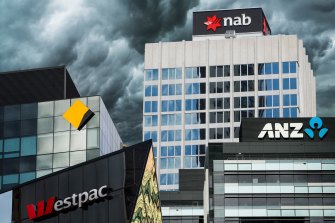 The major banks showed last year they were prepared to tailor their dividend payouts to their circumstances.

And they have no idea – as no-one at this stage does – how long the lock-down of large slabs of the economy will last, nor how many businesses will re-emerge when it ends. The extent of the longer-term impacts on employment and households is another unknown.

While the banks may have had no other realistic choice but to support their customers if they wanted to emerge from this episode with customers, the effect of their actions is to put a significant hole of uncertain dimensions in their earnings and capital bases as they effectively subsidise large swathes of those customers, knowing that many of those subsidies will end up as bad debts.

And the challenges to bank profitability don’t only flow from the actions the lenders have taken to provide life support for their customers, and the economy.

The Reserve Bank’s actions in cutting the cash rate to 25 basis points and targeting a three-year bond rate at that same level by buying bonds will further squeeze net interest margins that were already under pressure.

Last year, for perhaps the first time ever, the big four banks had an average net interest margin below 2 per cent. It’s going to be even lower now, even though the RBA has created a $90 billion-plus funding facility at 25 basis points to help them provide funding to small and medium-sized businesses.

The major banks showed last year that they were prepared to tailor their dividends to the circumstances. NAB and Westpac cut their dividends and ANZ lowered its franking level. There’s no reason to believe that, had APRA not provided its directive, they would have left their dividends levels intact.

While reducing their shareholder payouts will shore up the banks' capital levels – and a system already arguably the strongest in the world – it will come with some unfortunate consequences for the army of self-funded retirees who rely on franked dividends, particularly major bank dividends, for their income.

The banks will have choices in responding to APRA, and will be conscious of that reliance their retail investors have on dividends to fund their living expenses.

They could maintain their dividends but have them underwritten, effectively issuing matching equity and therefore maintaining their capital bases.

With an average share price fall of about 40 per cent since the escalation of the coronavirus pandemic became evident in late February, the banks would be reluctant to contemplate capital raisings. So retaining their earnings is the easiest, most efficient and least dilutive form of capital generation.

Big capital raisings like those the banks made during the global financial crisis would be the option of last resort, one that would be made more difficult, or at last more expensive and dilutive, if the banks do cut or defer their dividends.

Australia's banks entered this pandemic-induced financial crisis operating in one of the strongest banking systems in the world. Thanks to APRA’s decisive implementation of the recommendations of the Murray inquiry into the financial system, they are as well-capitalised and hold as much liquidity as any system.

They have relatively low-risk balance sheets because of their big bias towards lending for housing , which is even more the case now that most of them (NAB being the exception) have shed their wealth management businesses.

In the post-GFC era, they have also dramatically reduced their exposure to short-term wholesale funding markets, which means the decisions of credit ratings agencies are of less consequence than they might have been in the past.

The quandary over dividends encapsulates the wider uncertainties faced by banks globally, most of whom are in poorer condition to weather the economic and financial fallout from the coronavirus than Australia's banks.

This week Fitch downgraded the major banks, and S&P lowered its outlook for them but that should have only a marginal impact on their funding costs.

S&P has also, not surprisingly, lowered the outlook for Australia’s credit rating, which would flow through to the banks’ ratings given that governments’ ability to support their banks is a factor in the banks’ own ratings.

The quandary over dividends encapsulates the wider uncertainties faced by banks globally, most of whom are in poorer condition to weather the economic and financial fallout from the coronavirus than Australia's banks.

In advising the big banks to defer or reduce their dividends, APRA was effectively following the lead of Europe, the UK and New Zealand, all of whom have told their banks to suspend dividend payments.

The European banks have less capital and have been far less profitable than their Australian counterparts, and the impact of the coronavirus is, up to now, far more profound and damaging to the populations and economies in Europe and the UK than it is here.

The Morrison government also had a starting point of one of the more conservative fiscal positions of any developed world economy, enabling it to effectively throw the kitchen sink at the economy.

That, and the relative success at containing the virus, will hopefully enable an earlier, stronger and more broadly-based recovery in Australia than might occur elsewhere, reducing the peak period of pressure on the banking system in the process.