With billions in trading volume leaving centralized exchanges (CEXes), their decentralized counterparts are surging in volatility. One of them is Curve.Fi. On Tuesday, its CRV token dropped by -24%, only to rise over the week’s top, from bottomed $0.409 to $0.708, and then back down again.

From on-chain data, it appears there that some whales could be shorting one of the most popular DEXes.

The core feature of decentralized exchanges is that users themselves provide liquidity instead of banks or companies. In turn, when liquidity providers deposit tokens into the DEX’s liquidity pools, they are incentivized to do so with rewards from the native utility/governance token.

In the case of Curve.Fi, liquidity providers get CRV tokens, which can then be exchanged to make a profit on its price differences. For example, Curve’s largest liquidity pool, 3pool composed of three stablecoins, has the following CRV incentive structure. 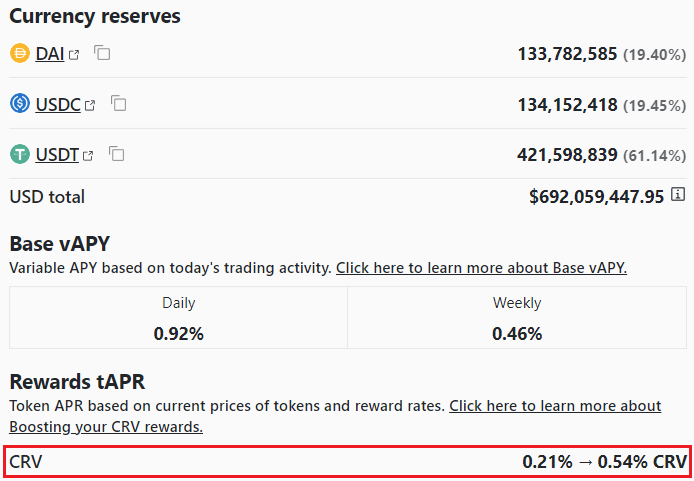 In other words, to topple a DEX, one would go after its main incentive driver. After all, what triggered the FTX collapse was Binance CEO tweeting they will liquidate their FTT holdings, causing a selloff for FTX’s native token and its eventual price collapse.

A similar speculation seems to be happening with the CRV token.

Why Did CRV Go Up and Down on Tuesday?

Given that Ethereum is a public blockchain, CRV-related transactions are traceable. For all intents and purposes, it appears that a crypto whale is testing DeFi’s fragility. Specifically, the liquidity of another DeFi platform, Aave (AAVE), a lending and open liquidity protocol? But where does the CRV token fit in?

A crypto whale, going by the descriptive moniker ponzishorter.eth, had borrowed CRV tokens on Aave, worth $39.86 million in USDC, on November 13th. Since then, he kept shorting CRV by selling it on centralized exchanges. The selling pressure dropped CRV by -24% on Tuesday, from $0.538 to its two-year low of $0.409.

Because CRV is also used as collateral for loans, the token’s value drop is threatening users with liquidation. This is when Curve.fi founder Michael Egorov stepped in by borrowing $20 million in USDC on Aave, collateralized by CRV, which he then added as collateral.

With this risky move to bolster Curve.fi’s ecosystem, Egorov placed himself for liquidation risk on Aave. Yesterday, Egorov already had $48 million worth of CRV on Aave at a liquidation price of 0.259. As it stands at press time, DeBank aggregator lists Egorov’s holdings at a 1.52 health rate on Aave, which is still above the liquidation threshold of 1.

In the meantime, ponzishorter.eth’s lowered his own health rate to 1.39, as CRV price recovered. Moreover, it appears this shorting action against Curve and Aave’s liquidity is coordinated with other whales like Avraham Eisenberg.

In short (no pun intended), it looks like whales are testing if dumping CRV can liquidate positions on Aave. Total liquidatable positions presently sit at $47.3 million which are holding at a $0.372 liquidation price.

It remains to be seen if Curve.fi and Aave stand the anti-fragility test. From the outside perspective, it doesn’t look well for users who simply want to check out DeFi after FTX’s collapse.

This article originally appeared on The Tokenist.

Finding a qualified financial advisor doesn’t have to be hard. SmartAsset’s free tool matches you with up to 3 fiduciary financial advisors in your area in 5 minutes. Each advisor has been vetted by SmartAsset and is held to a fiduciary standard to act in your best interests. If you’re ready to be matched with local advisors that can help you achieve your financial goals, get started now.