Facebook has banned the sharing or viewing of our news articles on its platform. For independent journalism straight from the source, download our app and sign up to our newsletters.

Seek chief executive Andrew Bassat announced the changes at the job search site along with its half year results on Tuesday with the company reporting that underlying earnings were only down slightly despite the COVID impact. 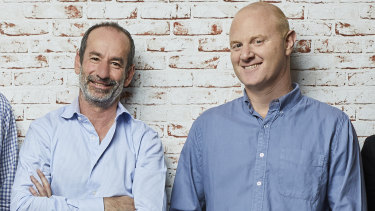 Seek reported that revenue declined 7 per cent to $826 million and net profit was down 8 per cent to $69.7 million after a year blighted by COVID. “It is the Board’s intention to recommence payment of ordinary dividends at the full year (FY21) subject to ongoing improvement in the macroeconomic conditions across our key markets,” the company said.

There will be significant changes at Seek with the company confirming it is in advanced talks to sell down its stake in Zhaopin and the transition of Mr Bassat to an executive chairman’s role which would also see him remain CEO of Seek Investments.

“Leadership succession at Seek has been a priority for Andrew and the Board. Andrew has decided that now is the time to transition away from the Seek CEO role and focus his expertise and passion on growing investments,” said Seek chairman Graham Goldsmith.

“Ian is the natural successor for Andrew. He brings a strong track record in digital transformation, strategy, and public company leadership. During the last two years, Ian has led Seek in partnership with Andrew and has had a tremendous impact in advancing the AP&A growth strategy.”

Mr Bassat said now is the right time for a new leader.

“Ian is a very accomplished senior executive and it has been a delight to work alongside him the past two years. As well as bringing skills well suited to the next part of the journey, Ian’s character and values give me great confidence that the Seek culture will be preserved and enhanced under his leadership,” he said.

The company signalled that Seek Asia Pacific & Americas (AP&A) would also be subject to a greater degree of independence and focus as part of the sharing of duties between Mr Bassat and Mr Narev.

“I am honoured that Andrew and the Board have chosen me to become Seek’s CEO,” said Mr Narev.

Mr Narev presided over a run of record profits at CBA, but his achievements were overshadowed by a string of public relations scandals at the bank, culminating in money-laundering breaches that led to a record $700 million fine and an excoriating regulatory report that concluded it was complacent from the top down.

Seek also said it, and other Zhaopin shareholders, are in advanced discussions with a consortium looking to acquire an ownership interest in Zhaopin. The business was the target of a short seller attack last year by Blue Orca which accused Seek of being a slow or no-growth platform whose core business is shrinking and which carries a dangerous amount of debt. Seek refuted the claims.