Despite Rivian's blockbuster IPO, Elon Musk has warned that the "true test" for the electric vehicle maker and Tesla competitor's success will be to achieve high production and breakeven cash flow.

"There have been hundreds of automotive startups, both electric & combustion, but Tesla is [the] only American carmaker to reach high volume production & positive cash flow in past 100 years," Musk tweeted.

Rivian, which is backed by Amazon and favored by Jeff Bezos, raised approximately $11.9 billion in its IPO after selling 153 million shares at $78 apiece. In addition, the company has granted underwriters a 30-day option to purchase up to 22.95 million additional shares at the IPO price.

Following its first two days of trading, Rivian is valued at more than $100 billion, above the market values of automotive giants General Motors and Ford Motor Company. Amazon holds a 22.4% stake in Rivian, while Ford holds a 14.4% stake. Shares are up approximately 3% as of the time of publication Friday.

Though Rivian has approximately 55,400 preorders for its R1T pickup and R1S SUV and has reached an agreement with Amazon for 100,000 electric delivery vans by 2030, the company has not generated any material revenue to date. Rivian said in its amended IPO prospectus that it will lose up to $1.28 billion in the third quarter and that revenue will range from zero to $1 million. 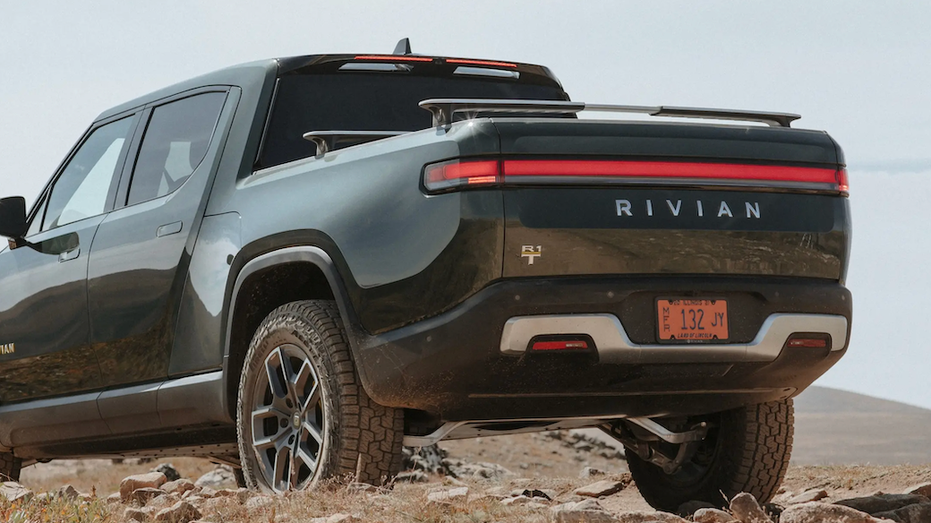 Rivian recently began production and deliveries of its R1T passenger pickup truck in September, which starts at $67,500 and has an EPA-estimated 314 miles of range.  (Rivian)

"We expect to reach a vehicle production rate, which, when annualized, would result in us using 100% of the facility’s current installed capacity of up to 150,000 vehicles by late 2023," Rivian wrote in the filing. "Further, we believe that we will be able to increase the annual production capacity of the Normal Factory up to 200,000 vehicles in 2023 as we introduce additional R1 platform variants and expand the facility. Over the next couple of years, we expect to establish additional domestic production capacity in order to support our product development roadmap and fulfill future anticipated demand."

This isn't the first time Musk has taken a swipe at the competition.

In August, Musk tweeted "Don’t want to be unreasonable, but maybe they should be required to deliver at least one vehicle per billion dollars of valuation *before* the IPO?" in response to reports that Rivian's IPO would value the company's at approximately $80 billion. He also tweeted laughing emojis in response to a report that Rivian was developing a Level 3 autonomous driving system with hands-free capability, similar to Tesla's Full Self-Driving feature.

In October, Musk also responded to a report that the R1T production rate stalled at just over 1 electric truck per day, tweeting "prototypes are trivial compared to scaling production & supply chain."

"If those are solved, achieving positive gross margin is the next nightmare," he added. "Starting a second new vehicle line before first is working will divide resources & amplify probability of failure."

In addition to Musk's Twitter jabs, Tesla has previously filed a lawsuit against Rivian, accusing the company of stealing employees and trade secrets.