OMAHA, Neb. — U.S. meat exports are surging even as the industry is struggling to meet domestic demand because of coronavirus outbreaks at processing plants that have sickened hundreds of workers and caused companies to scramble to improve conditions.

Although the situation could cause concern that American workers are risking their health to meet foreign demand, experts say it shouldn’t because much of the meat sold to other countries is cuts that Americans generally don’t eat. And at least one of the four major processors says it has reduced exports during the pandemic.

If companies manage to keep their workers healthy and plants operating, there should be plenty of supply to satisfy domestic and foreign markets, according to industry officials.

“I really feel like the industry is well positioned to serve all of its customers both here and abroad,” said Joe Schuele, a spokesman for the industry trade group U.S. Meat Export Federation.

Meat exports, particularly pork exports to China, grew significantly throughout the first three months of the year. This was partly due to several new trade agreements that were completed before the coronavirus outbreak led to the temporary closure of dozens of U.S. meatpacking plants in April and May and to increased absenteeism at many plants that reduced their output.

The Meat Export Federation said pork exports jumped 40% and beef exports grew 9% during the first three months of the year. Chicken exports, meanwhile, grew by 8% in the first quarter. Complete figures weren’t yet available for April, but Agriculture Department figures for the last week of April show that pork exports jumped by 40% as shipments to China and Japan surged and exports to Mexico and Canada remained strong. Beef exports declined by 22% in that last week of April.

China’s demand for imported pork has risen over the past year because its own pig herds were decimated by an outbreak of African swine fever, and China pledged to buy $40 billion in U.S. agricultural products per year under a trade pact signed in January. China also became the fourth-largest market for American poultry in the first quarter after it lifted a five-year ban on those products. A trade agreement with Japan and a new North American free trade agreement also helped boost exports.

Part of the reason why exports have continued to be so strong this spring is that much of the meat headed overseas was bought up to six months ahead of time — before the virus outbreak took hold in the U.S.

“A lot of these sales were made before COVID-19 hit. China had already made these purchases and then COVID-19 hit. They had actually pre-purchased a lot of this before the plant problems hit,” said Chad Hart, an agricultural economist at Iowa State University.

It’s also worth noting that meat exports to China and other Asian markets include cuts such as pig feet, snouts and internal organs that have little value in the United States. The most popular cuts in the U.S., including bacon and pork chops, largely stay in the domestic market. More than half of the chicken exports to China were chicken feet. And the Meat Export Federation says demand from the export market helps boost meat production in the U.S. because more animals are slaughtered to help meet all the demand.

Iowa Agriculture Secretary Mike Naig said he doesn’t think it makes sense to restrict exports because so much of the meat sold internationally isn’t popular in the U.S.

“I think it’s important to prioritize,” said Naig, whose state leads the nation in pork production. “I think companies should meet the domestic market first and then be free to sell the things that the American consumer doesn’t purchase and the types of things that we don’t normally consume. That’s economically important.”

Meat production in the United States is dominated by a few huge companies — JBS, Smithfield, Tyson Foods and Cargill. Cameron Bruett, a spokesman for JBS, said that Brazilian-owned company has reduced exports to help ensure it can satisfy U.S. demand for its products. Tyson Foods and Cargill didn’t respond to questions about their exports.

Smithfield Foods, which is owned by a Chinese company, said in a statement that it isn’t controlled by any government and that the free market determines what products it exports. JBS declined to respond to questions about its foreign ownership. Purdue University agricultural economist Jayson Lusk said it’s not clear what role the foreign owners play in deciding how much meat is exported. 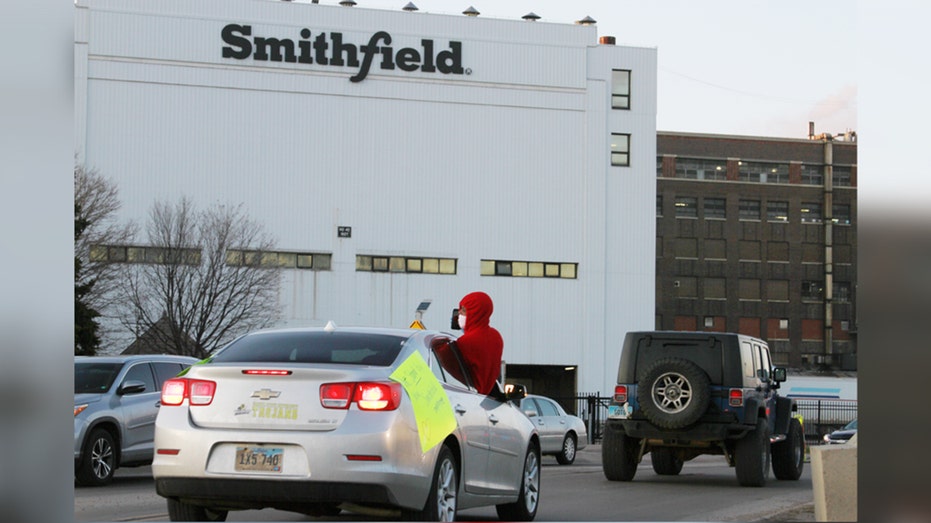 FILE – In this April 9, 2020 file photo employees and family members protest outside a Smithfield Foods processing plant in Sioux Falls, S.D. The plant has had an outbreak of coronavirus cases according to Gov. Kristi Noem. (AP Photo/Stephen Groves F

The industry has been dealing with a number of production challenges caused by the coronavirus, and several large plants had to close temporarily because of outbreaks of COVID-19, the disease it causes. At least 30 U.S. meatpacking workers have died of COVID-19 and another 10,000 have been infected or exposed to the virus, according to the United Food and Commercial Workers union, which represents roughly 80% of the country’s beef and pork workers and 33% of its poultry workers.

Kansas State agricultural economist Glynn Tonsor said he thinks the industry will get past the shortage concerns within the next several weeks.

“I think it’s important that we note that the U.S. hog industry is large enough to sufficiently supply our domestic market and export. We’ve done that for some time. We’ve been growing volumes in both places for some time,” Tonsor said.

Tyson and Smithfield have both been able to reopen huge pork processing plants that were temporarily closed in Iowa and South Dakota, which should help the industry keep up with demand even if some plants aren’t running at full capacity, said David Herring, of the National Pork Producers Council.

“I really don’t think we’ll see a big problem with meat shortages,” said Herring, who raises hogs near Lillington, North Carolina. “As long as the plants are able to come back up and operate maybe not at 100% but at 80% or 90%, I think we should be good.”