London (CNN Business)TikTok has a matter of weeks to secure a sale to an American buyer in order to avoid a US ban. The timetable looks increasingly tight.

What’s happening: Beijing appears to have just thrown a wrench in the process, my CNN Business colleague Sherisse Pham reports. On Friday, Chinese officials revised rules that govern the sale of certain kinds of technology to foreign buyers. The restrictions now cover data processing, speech and text recognition, according to government notices.
The notices did not name TikTok or its Beijing-based owner ByteDance. However, experts say that the rule change could give Beijing the power to block the sale of TikTok to a foreign company.

Former CEO Kevin Mayer indicated that a sale was imminent when he resigned from the role last week. In a letter to employees, Mayer said to expect “a resolution very soon” — a phrase indicating that a deal could be reached in coming days, according to a person familiar with the talks.
Analysts have pointed to a joint bid from Microsoft (MSFT) and Walmart (WMT) as the clear frontrunner, though Oracle (ORCL) is reportedly also in contention. Yet the update from Beijing makes clear that there’s more at play here than just selecting from a list of suitors.

“Does this slow things down, or does it mean the value of this asset is not in the tens of billions mentioned recently, but perhaps zero?” Rabobank strategist Michael Every said in a research note Monday. “If so, this would very powerfully illustrate the point about how private companies can get swept away by the changing political economy.”
After all, the TikTok discussions don’t exist in a vacuum. China’s Ministry of Foreign Affairs slammed the US administration Monday, alleging that it has been engaged in “economic bullying” and “political manipulation” under the pretext of concerns about national security.
Earlier this month, the US Commerce Department announced fresh sanctions on Huawei, one of China’s top tech firms. Paul Triolo, head of geotechnology at Eurasia Group, said the restrictions could serve as a “lethal blow” to the company, and that Beijing is likely to pursue targeted forms of retaliation in response.
Step back: Microsoft and Walmart’s pursuit of TikTok has received lots of attention. But whether the Trump administration and Chinese officials can green-light a deal that’s satisfactory to both sides in half a month is an open question.

The Dow Jones Industrial Average, spurred by easy money from the Federal Reserve, has skyrocketed more than 50% since March. But it’s struggling to keep pace with the S&P 500, the broader benchmark index of US stocks. 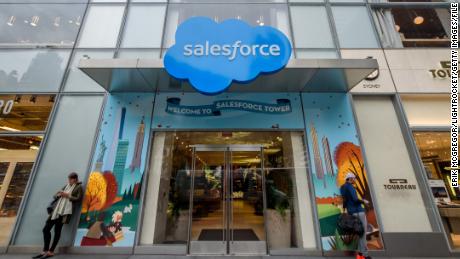 The latest: While the S&P 500 is now up 8.6% in 2020, the Dow is only 0.4% higher than it started the year. The index has yet to surpass its all-time high reached in February, even as the S&P 500 and Nasdaq log a string of fresh records.
Some big changes are coming to the Dow on Monday, with S&P Dow Jones Indicies adding Salesforce to the index to balance out the disruption from Apple’s stock split. Amgen and Honeywell are also due to join, while ExxonMobil, Pfizer and Raytheon are getting the boot.
But that shakeup is unlikely to help close the gap with the S&P 500.
That has to do with the way the Dow is constructed. Unlike the S&P 500, the Dow is weighted by the share price of its components, not market value. And while Salesforce has been on a tear recently, it’s not enough to compensate for the effects of Apple’s stock split.
Apple’s huge gains this year have helped add more than 1,400 points to the Dow, analysts at Bespoke Investment Group pointed out in a recent research note. With the company’s weight dropping from 12.1% to just under 3%, however, the Dow is poised to reap fewer benefits moving forward.
“Stock splits may be meaningless in terms of a company’s fundamentals but for a price-weighted index like the DJIA, they can have a large impact,” Bespoke said. “That and the fact that the index only has 30 components is one big reason why much less money is indexed to the Dow than the S&P 500.”

The company that makes Utz potato chips and Zapp’s Cajun kettle chips spent 99 years as a family-run business. Now, it’s going public, using the same strategy as Virgin Galactic and Lordstown Motors.
The details: Shares of Utz Brands — owner of snacks such as Golden Flake, Tim’s and Boulder Canyon — are scheduled to start trading Monday on the New York Stock Exchange under the ticker symbol “UTZ,” my CNN Business colleague Alicia Wallace reports.
To make it happen, Utz merged with Collier Creek Holdings, a “blank check” special purpose acquisition company, or SPAC, formed in 2018 by former Pinnacle Foods and Kraft executives.
Big picture: SPACs have gotten attention as the go-public method of choice for electric car makers like Nikola and other buzzy companies like DraftKings. Now, their appeal is broadening.
Billionaire Bill Ackman recently launched a SPAC called Pershing Square Tontine Holdings that went public with the aim of scooping up a $1 billion startup. Even Billy Beane, the baseball statistical savant played by Brad Pitt in “Moneyball,” has a company named RedBird Acquisition that went public as a SPAC in order to buy a sports franchise.