‘Once the lockdown is lifted, we will see some pickup in demand.’
‘And my sense is that it will be a long walk this time given that we have lost three months of economic activity.’ 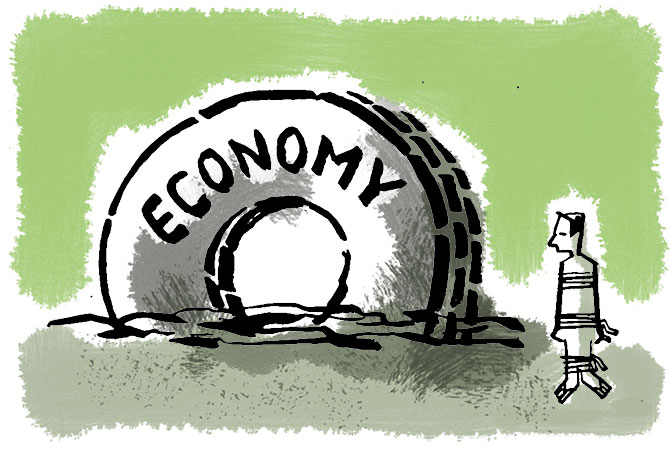 “Things are challenging, but an extension of the (loan) moratorium could actually help us tide over the crisis,” Dr Soumya Kanti Ghosh, Group Chief Economic Advisor, State Bank of India, tells Prasanna D Zore/Rediff.com after the Reserve Bank of India cut the repo rate by 40 basis points to 4 per cent on May 22.

Now that the RBI has cut the repo rate to 4 per cent with a stance that it will be accommodative, do you see the repo rate going down further to mitigate the COVID-19 impact on the Indian economy?

Yes, it (repo rates) will go down further. And this is not for enhancing liquidity but as a signaling mechanism.

But the RBI has been doing that since January 2019. It has not signaled lower interest rates. Why are banks cautious to lend?

No. That is not correct.

Actually banks have been lending and there has been adequate transmission (of rates corresponding to cuts in repo rates).

So that (banks lending to borrowers or borrowers going to banks for loans) is also a function of demand; whatever demand is there in the system banks have been adhering to that.

So that’s not correct (to say that banks are cautious to lend).

As of now, there are no signs of investment (revival); as of now we are yet to come out of the crisis.

The pandemic could last even one more month, at least in terms of the cases not peaking; they could possibly peak in June.

Right now the repo rate cut is only a tool to signal to the market that we are headed for a lower interest rate structure.

And maybe once the time arrives, growth will pick up.

As of now, I think, we are in a survival mode, but once the lockdown is lifted, we will see some pickup in demand.

And my sense is that it will be a long walk this time given that we have lost three months of economic activity.

Coupled with the package announced by the finance minister and the RBI loosening its purse strings, do you look forward to a rise in investment and consumption demand?

As of now, I don’t see that happening. It will depend on how things pan out in terms of how people cope with their job losses and income losses.

These numbers will be very big. As of now, we are just thinking in terms of surviving this crisis.

Investment and consumption demand will manifest with a time lag.

Consumption demand will come once investment demand picks up.

Consumption demand will come in two parts. One will be pent up demand which now consumers are holding down in the first quarter because of the lockdown.

Once the lockdown lifts, you can see a surge in consumption. But can that consumption demand sustain is a matter of debate.

The second will be fresh demand. But that too will depend how people feel about their future income prospects.

Where do you see the economy headed in the next two or three quarters or how will the annual GDP print look like?

Annual GDP print will be in deep single-digit negative.

It remains to be seen how the numbers pan out, but as of now, we are expecting negative single digit contraction.

Nothing can be done about it now. It could be minus 9 per cent also or even higher in negative double digits, but as of now, we are factoring it to be in negative single digit.

What more measures do you think should the RBI, on the monetary front, and government on the fiscal front, take to boost demand and revive the economy?

There could be more rate cuts; there could be change in the asset quality norms; the government could actually come up with a targeted package for the sectors which have been ravaged by the pandemic like aviation, hospitality, tourism, real estate.

The government should come up with support for these sectors at some point of time at a later date.

Some sort of support is obviously required at some point of time.

Do you expect the government to pump prime the economy?

There is an expectation (from the government that it will do it) but let’s see what happens going ahead.

How will the extension of loan moratorium till August 31 play out for both borrowers and lenders? Do you feel there will be a rise in non-performing assets going head?

So that’s where the RBI has made provisions to extend the moratorium so that if people actually get time to manage their cash flows when there is no inflow of income, so that’s why it has been extended (till August 31).

Hopefully, this extension should help out to some extent.

What will be the impact of COVID-19 crisis on the agriculture sector? Do you think farmers will be able to keep their heads above water?

The agriculture sector this year is likely to work a little better, but my point is that in the agricultural sector there have been several structural changes in the last couple of years.

For example, many farmers are now involved in allied activities (activities dependent on agricultural produce) and have diversified income streams. Allied activities now form a large part of farmers’s incomes.

From that point of view, it remains to be seen how the allied sector is linked to the cycle, rather than the agriculture sector.

In terms of rise in unemployment rates, how badly will the manufacturing and services sector be hit and do you see subsequent defaulting on loan obligations by individuals employed in these sectors?

Things are challenging, but as I said to you that an extension of the moratorium could actually help us tide over the crisis.

‘We believe there will be a full shutdown for four weeks and a partial shutdown for eight weeks.’
‘Hence, economic activity is unlikely to normalise before the end of May.’

Both packages announced by the finance minister and RBI governor were pretty comprehensive and address several issues which can be foreseen given the lockdown.

Still, these steps are mitigating in nature and will not be able to offset the loss of activity, both necessary and discretionary, amid a large increase in precautionary savings.

Once the crisis is over, the government probably needs to consider announcing more steps to kickstart growth once the COVID-19 comes under some control.

Are these measures collectively enough to deal with the loss of employment and output that the economy could face in the days to come?

No, they are unlikely to offset the loss of employment and output.

There is no fiscal or monetary measure that can offset the full impact, but these steps will help in reducing the burden on companies, salaried individuals, and the vulnerable.

Further, the loss of discretionary services consumption, such as tourism, purchase of clothes, festival related spending is unlikely to be recovered, but the inventory run down being faced in several areas, including food production, etc can be increased later, so there will ultimately be a payback in activity, but it will be much smaller than the decline we see initially.

How will the RBI’s moves to cut the repo rate by 75 bps and other monetary measures help the Indian banking sector?

The RBI’s step to cut rates is a non-negative measure, unlikely to increase credit demand, but will certainly help in reducing burden on some borrowers who already have loans, whether corporate or individual.

Similarly, the various steps to inject liquidity, introduce the TLTRO (Targeted Long Term Repo Operations) scheme for corporates, forbearance on some types of loans, interest deferment, will help the banking sector and ensure there is no shortage of funds for any sector that is under stress.

What kind of stress on macroeconomic parameters like output, employment, interest rate, inflation and exchange rates do you foresee the Indian economy going through in the wake of the COVID-19 pandemic?

In our central scenario, we believe there will be a full shutdown for four weeks and a partial shutdown for eight weeks. Hence, (economic) activity is unlikely to normalise before end of May.

This will cost the economy close to $120 billion, or close to 4 per cent of GDP, which in real terms mean loss of close to 2 per cent growth.

This will be accompanied with material increase in unemployment, but since that is mostly in the informal sector, it is difficult to quantify the number.

Interest rates are falling given the RBI’s actions, while the exchange rate may remain on a weaker trajectory given global risk aversion.

Inflation remains a bit of a mixed bag as falling discretionary pricing along with oil prices will likely be offset by higher food prices, which have risen materially as per recent data.

What more can the government and RBI do to help revive growth? How big a drop do you see in India’s GDP growth?

We believe the government clearly may have to increase fiscal support, both through relieving burden on other economic stakeholders, and also increasing or re-prioritising spending.

The RBI can keep its monetary policy accommodative, and we expect another 90 bps (one per cent = 100 basis points) of rate cuts in the next 3 to 4 months.

How big a measure is the three-month moratorium that the RBI announced for home loan borrowers? Could you explain how this will work out for home loans, personal loans, credit card loans, etc?

As per my understanding, the loan moratorium is an extension of duration, but not a waiver of interest costs.

A home loan which was say for 20 years will now be for 20 years and 3 months. Interest costs will still need to be paid over time.

As such, for single income families, entrepreneurs who have seen their businesses impacted by the slowdown, it will help reduce pressures on their cashflow, and also improve their ability to keep paid staff on the books.

For those who are salaried employees with little chance of facing liquidity crunch, should consider paying their dues on time, as it will reduce the extra interest burden.

How long would it take for the global economy to start firing on all its engines?

There is heightened uncertainty as things stand. COVID-19 cases are rising every day globally, and risks are it may speed up even further.

The invention of a vaccine or a full-fledged treatment can be seen as the end of this pandemic, but risk aversion, at the individual, corporate, and sovereign level may continue for some time even beyond that.

We see some normalcy coming back to the world economy by the end of 2020, and trend growth may resume only in 2021.

However, as I indicated, the heightened uncertainty is likely to remain with us for some time.