It is a nail-biting time for all retailers, whose yearly sales and earnings are heavily skewed to their performance over this weekend’s Black Friday and Cyber Monday.

Logistics issues, supply shortages, staff shortages and transport delays are additional ingredients that retailers will have to account for this year when managing inventory for these four days of intense shopper degustation. 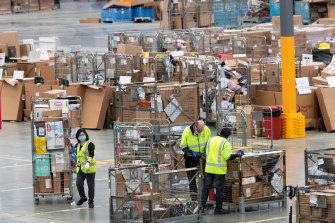 A bumper Black Friday/Cyber Monday will come with its logistics challenges.

Advertising for the event has reached a fever pitch and even banks are employing eye-widening headlines to emphasise the importance of this weekend as a sales bonanza for their business customers.

“Up to one million dollars a minute will be spent across Black Friday and Cyber Monday,” National Australia Bank has declared.

Having emerged from restricted lockdowns, retailers are hoping that the billions of dollars saved from 18 months of travel restrictions and various government stimulus packages have provided the pre-conditions for a shopping bonanza.

That said, two of Australia’s major retailers have reported a mixed performance bag over the past three to four months. Harvey Norman has told investors total sales from July 1 to November 21 fell 8.8 per cent against the same period last year and pre-tax profit plunged 35.5 per cent. Kogan.com experienced a gain in sales in the four months to October 2021 but a fall in profit compared with the same time last year.

Both companies are coming off a very strong 2020.

These important calendar moments for retail are, of course, US imports born from an online shopping marketing promotion timed for the Thanksgiving holiday.

The big discount days have been embraced internationally and have spread into bricks and mortar stores, and it has expanded from physical goods to services. But statistics also show that the proportion of spending online in Australia doubles during the four-day period.

Airfares, holidays, investment advice, low calorie meal kits as well as the more conventional products such as apparel and furniture – all have jumped on the promotional sales train.

Catchy as the BFCM label is, the weekend marks a first coming for Christmas spending – but at discounted prices.

Consumers have spoken with their wallets giving retailers a clear message that they want discounts before Christmas.

The National Retail Association is predicting a $5.6 billion splurge over the four-day period – which represents an 8 per cent increase over the same period last year. NAB is making a similar prediction, that sales will come in at $5.5 billion.

Armed with its own merchant data the Commonwealth Bank said that sales in 2020 were up 10 per cent on 2019.

“The increase in sales in 2020 in comparison to 2019 bodes well for the Black Friday sales this coming weekend,” according to head of consumer and diversified industries in CBA’s business banking division, Jerry Macey.

But the spending patterns are heavily skewed to certain product groups in this four-day lead up to the festive season.

“Furniture and electronic retailers also enjoyed a strong jump in consumer spending last year, with furniture businesses recording a 33 per cent boost in spending over the Black Friday four-day period when compared with the week prior, while electronic sales soared 26 per cent.”

And if the second half of November and December are combined, the National Retail Association is expecting our wallets to be $60 billion lighter.