Samsung sold 6.7 million 5G smartphones in 2019 and now accounts for more than half the global market, it announced Thursday. The South Korean tech giant exceeded its own expectations, having set a sales target for the year of around 4 million.
Samsung (SSNLF) has first mover advantage when it comes to smartphones that run on the new high-speed networks, beating its rivals to the punch when it rolled out the Galaxy S10 5G for Verizon customers in May last year. Apple (AAPL), on the other hand, is not expected to have a 5G-enabled smartphone until the end of 2020.

Verizon was also the first carrier to offer a 5G-compatible phone when it launched its moto z3 smartphone. However, that phone required an accessory that attached to the back of the device to access the 5G network. 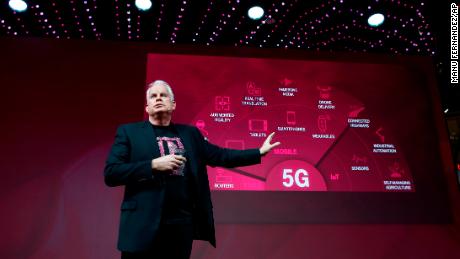 Samsung has since released four other 5G smartphones under its flagship Galaxy series — the Note 10 5G, Note 10+ 5G, A90 5G and the Galaxy Fold 5G. The company will also release its first 5G tablet, the Galaxy Tab S6 5G, to customers in Korea in the first quarter of 2020.

“We are excited to bring 5G to even more device categories and introduce people to mobile experiences they never thought possible,” TM Roh, head of research at Samsung’s mobile communications division, said in a statement.
Samsung has benefited from the current troubles facing Huawei, the world’s largest telecommunications equipment maker and a leading smartphone seller.
Washington added Huawei to a trade blacklist in May, barring US companies from selling vital tech and components to the Chinese tech giant. The ban also put a dent in Huawei’s ambitions to dominate the global 5G smartphone market.

As the market gears up for the next generation of ultra-fast wireless technology, analysts at securities firm Daishin have predicted that Samsung will have the upper hand “as virtually the only 5G smartphone manufacturer in the world outside China.”
— Sherisse Pham contributed to this report.
Source: Read Full Article