For the first time in nearly 30 years, a country will drop the British monarchy. On Tuesday, Barbados’ Governor-General, Sandra Mason, announced the island nation’s plan to remove Queen Elizabeth II as the head of state and proceed as a republic. (The last nation to do so was Mauritius in 1992.)

A little history lesson: The English colonized Barbados in 1627, and the island remained a colony until November 30, 1966 when they achieved independence. Though Barbados is an independent nation, it’s still tied to the monarchy, and its institutions are based on systems in Great Britain.

“The time has come to fully leave our colonial past behind,” said Mason during her speech announcing this monumental news. Adding sentiments from Prime Minister Mia Mottley, Mason went on to state, “Barbadians want a Barbadian Head of State. This is the ultimate statement of confidence in who we are and what we are capable of achieving. Hence, Barbados will take the next logical step toward full sovereignty and become a Republic by the time we celebrate our 55th Anniversary of Independence.” 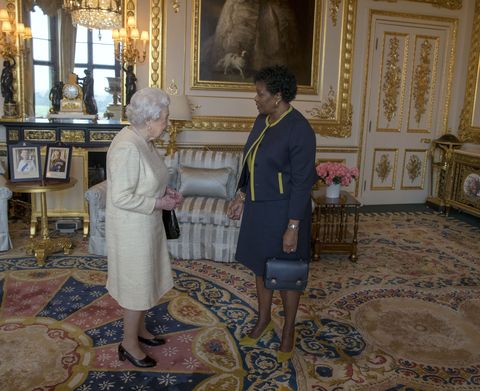 The Queen remains the head of state for former colonies including Australia, Canada, New Zealand, Jamaica, The Bahamas, Saint Lucia, Solomon Islands, and Tuvalu among others.

In July, Prince Harry and Meghan Markle called upon the United Kingdom to acknowledge the “wrongs” of its colonial history. Harry said:

As Mason declared, Barbados’ plan is to become a republic by next November. You can watch her announcement here: