A new rule by Secretary of Education Betsy DeVos will reshape how colleges handle sexual misconduct ― speeding up investigations, adding protections for the accused and even allowing schools to skirt responsibility for assaults entirely if they take place off-campus.

The 2,000-page rule, which was released Wednesday, addresses how K-12 schools and colleges are required to implement Title IX, the federal civil rights law created to ensure gender equality in education. DeVos preemptively dismissed critics ― she said on a call with reporters that “many will, unfortunately, offer you scare quotes and half-truths in attempts to denigrate and undercut this rule” ― and said it would make the process quicker and fairer.

But it follows in her past footsteps to apply legal standards to college disciplinary proceedings, something that makes it harder for survivors of sexual violence to report harassment and assault by narrowing the definition of sexual misconduct and limiting whom a victim can report to. That could be a boon for colleges: When there are fewer sexual misconduct cases, colleges actually save money ― anywhere from $286 million to $368 million over 10 years, according to estimates included in DeVos’s 2018 proposed guideline.

One alarming element of the new rule is that schools are not responsible for responding to sexual violence that occurs off-campus or while students are studying abroad. Off-campus spaces include housing ― 87% of college students live off-campus ― bars and fraternity houses, where sexual abuse can be prevalent. Additionally, this would allow schools involved in sexual assault scandals ― such as Michigan State and Ohio State ― to sidestep misconduct perpetrated by staff at off-campus events.

“There are two times we would have the most calls and the most reports,” Carson said of her time as a hotline advocate for college campus sexual assault survivors. “One is during the red zone at the beginning of the school year, and the second is when folks would return from study abroad in the winter. This means that a majority, or all of these students now, would not be able to move forward with a formal report even if they are still forced to see their [perpetrator] every day in class.” According to a 2017 analysis of sexual violence and study abroad, female college students who study abroad are five times more likely to be raped than their counterparts who stay on their college campuses. 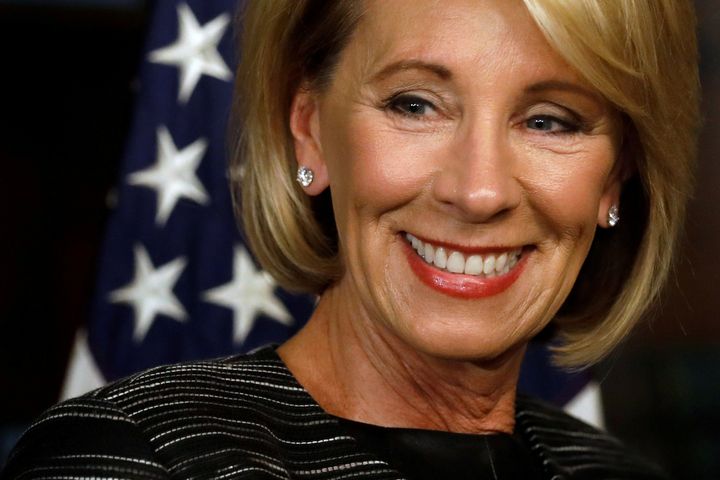 Study abroad was not discussed in Title IX guidance before DeVos’s new guideline, but it was widely understood as applicable no matter where the student experienced sexual misconduct. Schools were required to process complaints “regardless of where the conduct occurred,” according to the 2014 Obama-era Title IX guidelines.

“Whether you are raped in your on-campus dorm room or in another country, having to see your rapist in class equally interrupts your education,” said Sarah Nesbitt, a policy organizer at KnowYourIX.

Other provisions included in DeVos’s new guidelines make it harder for survivors to report and get justice through the Title IX system. In a move proponents say improves fairness for the accused, the rule allows the accused to participate in a live cross-examination of the alleged victim through a third party, which means a survivor could be questioned by an accused person’s parents, friends and even fraternity brothers. (The guideline does prohibit the accused from cross-examining the accuser themselves, and the two parties are not allowed to see each other during the process). Some advocates argue that cross-examination is triggering for many survivors and can be used as a tactic to silence students contemplating coming forward.

“Betsy DeVos’ new rules for how America’s colleges and universities address sexual misconduct allegations are designed to expand protections for abusers in a system that is already overwhelmingly rigged in their favor,” Shaunna Thomas, executive director of UltraViolet, said in a Wednesday statement. “Students throughout the nation are less safe because of this decision.”

Another way the rule could reduce the case numbers is by narrowing the definition of sexual harassment. The new rule defines sexual harassment as “severe, pervasive, and objectively offensive,” which survivor advocacy organizations have argued forces a victim to be harassed multiple times before they’re able to file a complaint.

DeVos and Kenneth Marcus, assistant secretary of the Education Department’s Office for Civil Rights, touted that their department has closed 172 sexual misconduct cases in the last three years ― a 375% increase from the prior eight years, DeVos said on Wednesday. Advocates worry, however, that closing misconduct cases quickly doesn’t actually get justice for survivors or the accused but instead reduces costs for colleges.

There are some positive steps in the new rule, according to advocates for victims. It allows for sexual misconduct hearings to take place digitally, which is a welcomed provision as college students in the U.S. are now remote learning from home due to the coronavirus pandemic. However, advocates stressed that this is a step that the civil rights office should’ve taken earlier when the pandemic hit the country in March and many accusers were left in limbo.

A group of organizations, lawmakers and others have already vowed to fight the new rule. Colorado Attorney General Phil Weiser opposed the new guidelines on Wednesday and promised to challenge the Department of Education’s decision in court. The National Women’s Law Center also tweeted that the rule “guts Title IX protections” and vowed to take DeVos to court.

Sen. Patty Murray (D-Wash.) said Wednesday that the guidelines were “about silencing survivors” and would “make schools less safe.”

Rep. Jackie Speier (D-Calif.) condemned DeVos’s new rule, calling it “a dark day for survivors of sexual violence across the country and a flagrant get out of jail pass to rapists” in a statement Wednesday.

“I ask Betsy DeVos to look a survivor in the eyes and explain how these changes will keep her safe or ensure that she achieves justice,” Speier said in the statement. “I ask this Administration – where is the humanity in subjecting a survivor to live hearings and cross examinations, or in making it easier for a perpetrator to get away with gross misconduct knowing they can go on to violate again?”