The recent string of attacks against elderly Asian Americans in northern California has sparked national outrage and warnings from civil rights groups that such violence will only intensify in the upcoming months if President Joe Biden’s Justice Department does not act immediately.

It’s a serious problem nationwide beyond the San Francisco Bay area too, one that some blame on former President Donald Trump because of his racist rhetoric describing COVID-19 as the ‘Chinese virus’ or ‘Kung Flu.’

Incidents of COVID-related hate crimes against Asian Americans have not dissipated even though Trump is out of the White House. Over the last month, one of the attacks against Asian Americans included the fatal assault of 84-year-old Vicha Ratanapakdee, an immigrant from Thailand, who was violently shoved to the cement ground and later died in San Francisco.

Merrick Garland, Biden’s nominee to serve as attorney general, hasn’t said anything publicly on this specific issue — yet. It didn’t come up during day 1 of Garland’s Senate confirmation hearings on Monday, though the federal appellate court judge did speak more generally about confronting racial discrimination and enforcing civil rights laws.

“That mission remains urgent because we do not yet have equal justice,” Garland said. “Communities of color and other minorities still face discrimination in housing, education, employment, and the criminal justice system; and bear the brunt of the harm caused by pandemic, pollution, and climate change.”

Garland most definitely will be dealing with this issue should his nomination get approved.

Just days after his inauguration, Biden signed an executive order vowing to combat xenophobia by calling on his incoming attorney general to develop a plan to collect more data on hate crimes and work with local agencies to prevent hate crimes committed against the Asian American and Pacific Islander community.

“Hate crimes and violence against Asian Americans and Asian immigrants have skyrocketed during the pandemic,” Vice President Kamala Harris wrote on Twitter not long after Biden signed the executive order. “We must continue to commit ourselves to combating racism and discrimination.”

House Speaker Nancy Pelosi, a Democrat who represents a San Francisco district with one of the nation’s largest Asian American communities, also condemned the recent attacks.

“As we celebrate the Lunar New Year as a source of joy, it’s also a source of pain for us at this time because of all of these incidents,” she said during a virtual news conference on February 19. “Our diversity is our strength, our unity is our power, and we have unity on this subject.”

Stop AAPI Hate, an organization that tracks hate crimes and incidents committed against Asian Americans across the country, has recorded at least 2,808 incidents of discrimination against the AAPI community between March 19 and December 31, 2020, a time period coinciding with the deadly coronavirus pandemic ravaging the US.

While the FBI hasn’t released its official data on 2020 hate crimes, several studies have found an overall spike in violence targeting Asian Americans since the pandemic began, a finding that the Biden White House has acknowledged.

Stop AAPI Hate does not currently have information on the number of hate incidents committed against Asian Americans since Biden took office.

Russell Jeung, one of the co-founders of Stop AAPI Hate, said that even after spending nearly a year tracking crimes and incidents committed against Asian Americans across the country, it still hasn’t gotten easier for him to watch the recent footage of elderly Asian Americans being attacked in the California area.

“It’s still shocking because the footage is so graphic and so senseless that I could read thousands of incidents, but when you witness it in these ways, it’s horrifying,” Jeung, a professor of Asian-American studies at San Francisco State University, told Insider.

This is most likely a fraction of the hate crimes and incidents committed against the Asian American and Pacific Islander community this past year because many go unreported due to fear of law enforcement or language barriers, Jeung added.

It is unclear whether all of the incidents that STOP AAPI has tracked were directly motivated by anti-Asian sentiment or other reasons.

In March 2020, former Attorney General William Barr announced that would appoint a COVID-19 civil rights coordinator to lead investigations “into known and suspected hate crimes and civil rights violations related to the nation’s ongoing public health emergency,” according to a news release at the time.

The FBI is required by law to track hate crimes every year and publish its findings. However, House Democratic lawmakers argue that is simply not enough.

“For over a year, our community has been fighting two viruses, not just the COVID-19 pandemic but that of anti-Asian hatred and discrimination,” Rep. Grace Meng, a Democrat from New York, said during a virtual news conference on February 19.

Last year, the House passed a resolution condemning all forms of anti-Asian sentiment related to COVID-19. The chamber also passed the NO Hate Act, with some Republican support, that would provide local law enforcement funding to help investigate hate crimes. The Senate, which was controlled by Republicans at the time, did not take up the bill.

“We can’t and we must not be idle,” Meng, who spearheaded the resolution, said. “This terrorizing of Asian Americans, especially our elderly and it must stop,” she said. 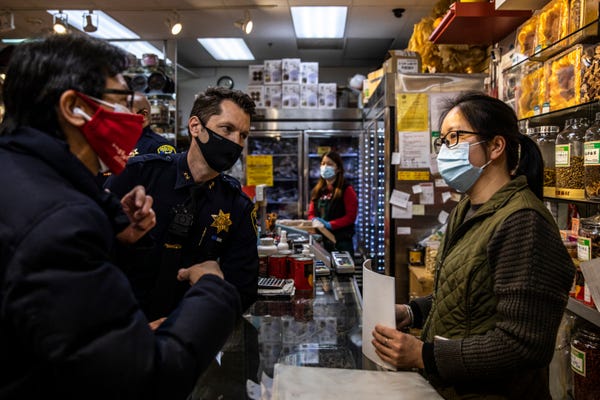 Cities take matters into their own hands

Rather than wait for slow-moving action from Washington, some cities are taking the issue into their hands.

In northern California, where many of the recent attacks against elderly Asian Americans have occurred, dozens of people have volunteered to walk older Asian Americans around Oakland’s Chinatown area to help them feel safe.

Earlier this month, Nancy O’Malley, the district attorney for Alameda County, also created a special unit to investigate crimes committed against Asian Americans in response to the recent attacks in the Bay area.

The New York Police Department created a similar unit back in August after seeing a spike in attacks against Asian Americans amid the pandemic.

Jeung says that the Biden administration needs to act immediately because the issue won’t go away and will most likely worsen.

“We’re calling for long-term solutions. Even if the media attention goes away, we know racism will persist, and we want to get at those foundations of racism,” he said.