The symbol of a clenched, raised fist is ascendant among Black Lives Matter protesters, Antifa rioters and other political left-wingers.

But critics of the symbol note its origin and long use with communist movements – a history so fraught that, until recently, many left-wing protesters hesitated to use the iconic image.

“It is a symbol used by movements that establish oppressive systems, as every system established along Marxist lines has been,” Murray Bessette, a former professor of government at Morehead State University and now with the Victims of Communism Memorial Foundation, told Fox News.

“The raised fist is primarily used by organizations and movements that are heavily influenced by Marxism broadly understood,” Bessette explained.

“The common thread is [an] understanding of all social, economic and political relations as a contestation for power between a class of oppressors (i.a., rich, White, heterosexual, male) and a class of oppressed,” he said. 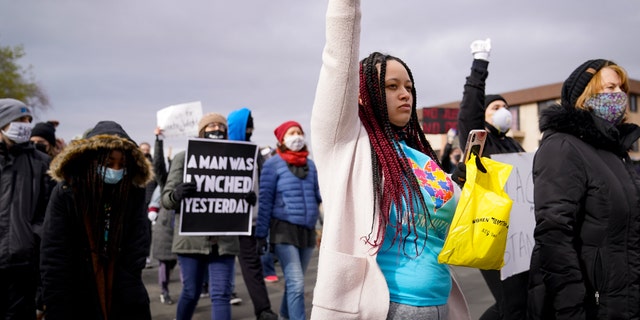 Back in 2006, socialist historian Sheila Rowbotham told The Guardian that the symbol had fallen out of favor. “It symbolises power clenched within the group, and since the 1960s the left has felt ambiguous about the exercise of power,” she said.

The symbol gathered a negative perception after being used by violent revolutionaries and dictators.

The symbol became “so freighted with historical associations – the murky faction fighting on the left in the Spanish civil war, the perversion of communism in the Soviet Union, the tyrannies that emerged in post-colonial Africa,” the Guardian reported at the time.

“It is now almost impossible for a western liberal to use the clenched-fist salute unself-consciously,” Rowbotham said in 2006.

What is the history that made the symbol so unpalatable?

The first printed versions came in the early 1900s, with cartoons like this one published in 1917 by the Industrial Workers of the World.

The symbol was soon picked up by violent communist factions as well, such as those in the Spanish Civil War.

One 1936 poster from the communist-aligned Unified Socialist Party of Catalonia (PSUC) depicts four fists raised in front of a Soviet flag.

Much of the fighting in the war involved leftist groups fighting each other.

George Orwell, then a young British socialist who traveled to Spain to fight against fascists, soon found that the communist PSUC, a group behind the poster, denounced his own group as “fascist.”

“When the Communists gained control … and began to hunt down [my socialist faction] … we were very lucky to get out of Spain alive,” Orwell reported.

Orwell credited his experience in Spain with helping inspire his classics “1984” and “Animal Farm,” which took aim at communist totalitarian propaganda for its hypocrisies and lies.

In the Soviet Union, some propagandists got more creative than a simple raised fist. One poster depicted a fist titled “red front” crushing a caricature of a Western capitalist.

But in the 1960s, the raised-fist symbol morphed to take on other meanings as well, especially regarding decolonization and racial issues.

Anti-colonial movements around the world also began to use the fist at around the same time as the Black Panther Party did.

Iran released a poster featuring the fist one year after its revolution overthrew a U.S.-backed leader in 1979.

“Congratulations to all Muslims and oppressed people of the world,” the poster read.

Many other anti-colonialists also used it, ranging from Mozambique revolutionaries to the International Union of Students, commemorating “25 years of struggle for anti-imperialist student unity.”

The fist went out of fashion after oppressive tyrannies emerged in countries like Mozambique and Iran.

But decades later, few remember. Now the symbol is back in style like never before.

In 2020, anarchists set up an “autonomous zone” in Seattle, where multiple people were killed. The fist featured prominently. 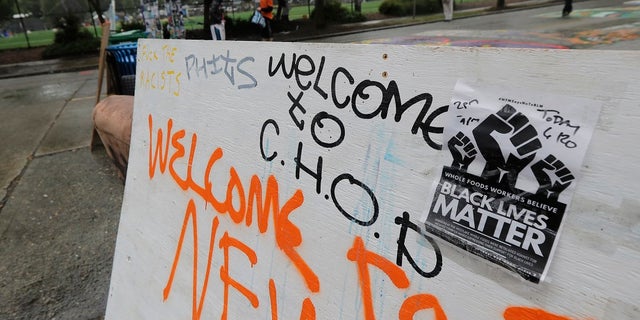 A sign on a makeshift barricade reads "Welcome to C.H.O.P." after Seattle Department of Transportation workers removed concrete barricades at the intersection of Tenth Avenue and Pine Street at the CHOP (Capitol Hill Occupied Protest) zone in Seattle. The area has been occupied by protesters since Seattle Police pulled back from their East Precinct building following violent clashes with demonstrators earlier in the month. (AP Photo/Ted S. Warren)

The raised-fist icon has become closely tied to race and “doesn’t have to be a specifically socialist symbol anymore,” Kristian Niemietz, a London-based economist and author of the book “Socialism: The Failed Idea That Never Dies.” told Fox News.

But connections still run deep. Niemietz pointed to a UK BLM fundraiser, which caused a stir last year, that said the group is “guided by a commitment to dismantle … capitalism,”

The UK BLM later clarified in an FAQ posted online.

“[W]e are not a Marxist organisation. While some of the members of UKBLM are Marxists, not all members are. We are, however, all anti-capitalists,” the group explained.

“A lot of socialists … believe that capitalism and racism are intrinsically linked… This is complete nonsense,” Niemietz said.

“Racism has existed long, long before the advent of modern capitalism, and it existed in socialist societies as well. If anything, capitalism tends to reduce racial prejudice over time, because … we trade peacefully with a variety of people from a variety of backgrounds,” he added.

The symbol’s new popularity shows “socialism has become extremely fashionable again… it has absorbed and co-opted the anti-racism movement. It will, I suspect, co-opt and absorb others,” he said.