The estate of Jeffrey Epstein has agreed to pay what could amount to more than $US105 million ($155 million) to the US Virgin Islands to settle claims that the disgraced financier used the territory for his decades-long sex-trafficking operation under the guise of running a financial advisory firm.

The settlement, approved on Wednesday, caps a nearly 3-year-old lawsuit brought by the office of Denise N. George, the attorney general for the US Virgin Islands. 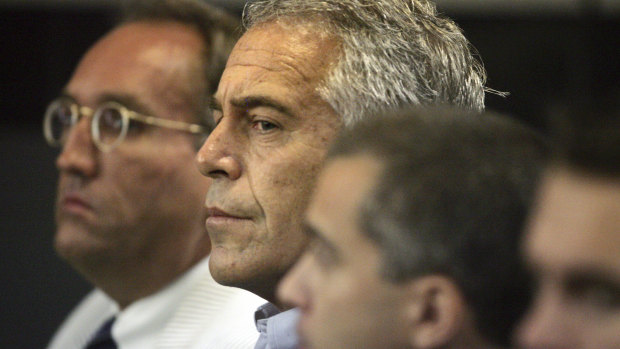 The late Jeffrey Epstein, pictured in court in 2008. One of the aims of George’s litigation was to make sure Epstein’s victims were appropriately compensated.Credit:AP

After a year of negotiations, Epstein’s estate agreed to repay in cash more than $US80 million in tax benefits that one of his companies had received from the Virgin Islands. The settlement will also permit the government to get about half the proceeds from the estate’s planned sale of Little St James, the secluded private island where Epstein had resided. The sale could fetch around $US55 million.

George, whose office filed a civil racketeering lawsuit against Epstein’s estate in January 2020, had argued that the US territory was deceived into granting lucrative tax benefits to Epstein’s Southern Trust Co. That enabled Epstein to use his island residence as a place to sexually abuse young women and finance his lavish lifestyle, George argued.

“At the very start of the case, I was so honoured to have met three very courageous young women who were trafficked and sexually exploited on Little St James,” George said in a statement. “Our work has been inspired, humbled and fortified by the strength and courage of all of those who survived Epstein’s abuse.”

Neither the estate nor Epstein’s two long business advisers, Darren Indyke and Richard Kahn, admitted any wrongdoing as part of the settlement.

Lawyers for the estate did not respond to requests for comment.

The negotiations were complicated by the fact that Epstein’s onetime $US600 million estate had $US22 million in cash on hand at the end of June after paying hundreds of millions of dollars to victims, lawyers and the IRS. Much of the estate’s remaining $US159 million in assets are locked up in investments. The estate will have up to a year to come up with the necessary cash to fulfil its settlement terms.

The settlement closes one more chapter in the long and sordid scandal of the secretive financier, who managed to forge close associations with a long list of wealthy men, politicians and celebrities despite whispers and allegations that he had sexually abused teenage girls and young women.

Epstein, who had pleaded guilty in 2008 in Florida to two counts of soliciting prostitution from a teenage girl, died of an apparent suicide in August 2019 while being held in federal custody on a new set of sex exploitation charges.

Last December, Ghislaine Maxwell, one of Epstein’s longtime associates and a former girlfriend, was convicted in federal court in New York on charges that she helped him sexually traffic and abuse young women and teenage girls. Maxwell, a former socialite, was sentenced to 20 years in prison. 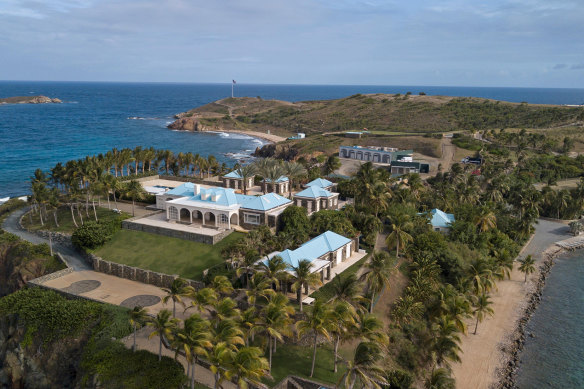 Jeffrey Epstein’s home on the island of Little St James in the US Virgin Islands. Credit:Miami Herald

Federal authorities have not charged anyone else in connection with Epstein’s activities, which reportedly occurred at his residences in the Virgin Islands, New York, New Mexico and Palm Beach, Florida, according to court papers and lawsuits.

Epstein’s estate agreed to provide George’s office with documents to help with additional investigations. Over the course of the litigation, George, working with lawyers from Motley Rice, has served subpoenas on banks that worked with Epstein and some of the wealthy men who did business with him, including Wall Street billionaire Leon Black.

Black, a co-founder of Apollo Global Management, a private equity firm, and a friend of Epstein’s, had paid at least $US158 million to Southern Trust for financial and tax advice. Black accounted for nearly 80 per cent of the revenue taken in by Southern Trust, which Epstein had told Virgin Island officials was developing sophisticated algorithms to mine financial and DNA databases.

On Monday, Black was sued by Cherie Pierson, who said that he raped her while receiving a massage at Epstein’s New York mansion in 2002. Her lawsuit, filed in New York state court, said Epstein had helped arrange the meeting with Black.

According to the lawsuit, Epstein told Pierson, who was a single mother, that he was going to introduce her to a “very powerful and wealthy” man who might be able to provide her with financial help.

Susan Estrich, a lawyer for Black, said in a statement that the claim was “categorically false” and “part of a scheme to extort money from Mr Black.”

One of the aims of George’s litigation was to make sure Epstein’s victims were appropriately compensated. A restitution fund established by the estate and approved by her office has paid out more than $US129 million to more than 125 victims. The estate has separately paid out about $US30 million to several other victims.

As settlement talks dragged on this year, the estate put Little St James and another island Epstein owned, Great St James, up for sale. The asking price for each island is $US55 million.

Under the terms of the settlement, half the proceeds from the sale of Little St James will go into a government-administered trust that will provide counselling and other social services for victims of sexual abuse in the US Virgin Islands.

This article originally appeared in The New York Times.