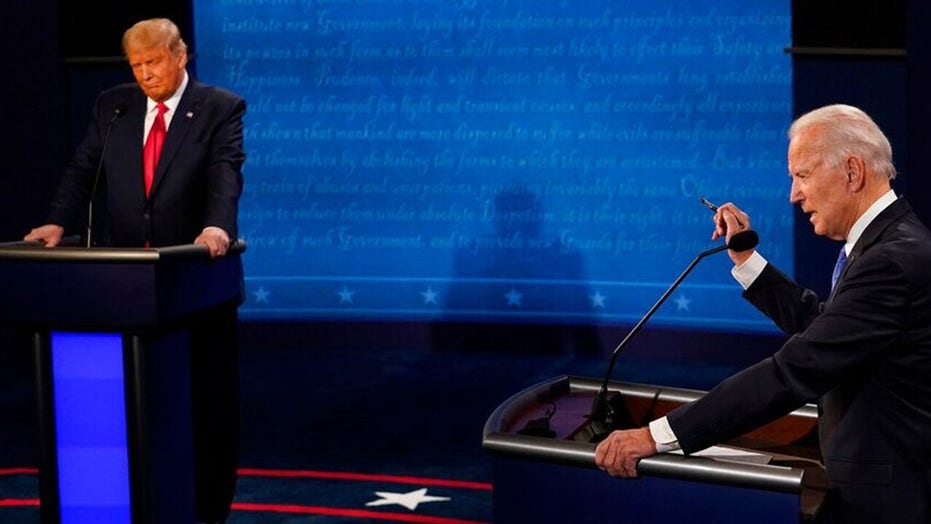 The debate averaged 61.7 million viewers across six networks, down from the 68.1 million who tuned in for the first Trump-Biden showdown Sept. 29. With Election Day fewer than two weeks away, the debate offered both candidates their last chance to make their case in front of a large national audience watching and listening on TV, radio and online.

ABC finished second with an average of 11.2 million viewers, followed by NBC with 10.6 million. CNN averaged 7.5 million viewers during the debate, while MSNBC rounded out the top five with 6.9 million and CBS finished last by averaging 5.7 million viewers. The FOX network aired NFL “Thursday Night Football” instead of the debate.

Fox News finished ahead of CNN and MSNC combined.

Fox News set another ratings record earlier this month when a staggering 11.9 million viewers tuned in to the channel's coverage of the Oct. 7 vice presidential debate between Sen. Kamala Harris and Mike Pence.

The event became the most-watched vice presidential debate on a single network in television history, topping the prior record that Fox News set in 2008 when 11.1 million tuned in to see then-Sen. Joe Biden face off with Sarah Palin.

Fox News Channel wrapped up a historic third quarter last month as the first cable network ever to surpass all broadcast networks in total weekday prime-time viewers for an entire three-month period.

The FOX network’s decision to air NFL football over the debate was not unprecedented. In 2016, NBC skipped the second debate back between Trump and Hillary Clinton to air a "Sunday Night Football" game between the New York Giants and Green Bay Packers.