Corporate history is littered with the remains of executives who have been forced out on the back of profit downgrades. So you have to wonder whether Nuix’s chief executive and chief financial officer can survive the company’s second one in six weeks.

Whether Nuix boss Rod Vawdrey or its head of finance Stephen Doyle deserve to go becomes almost academic. A series of snafus, governance problems, a bit of bad luck and an overhyped listing has created a toxic cocktail for the company which has seen its share price fall by 75 per cent from its high in January.

It needs a circuit breaker – and a purge of the most senior executives might be the board’s most effective arsenal. 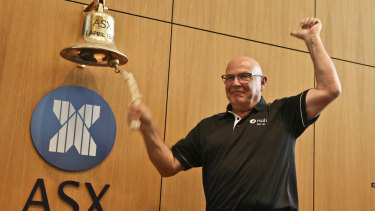 Last week’s attempt by Nuix to clean up its image by ditching its ties with controversial former chairman Tony Castagna was way too little, way too late. It did so in the days following confirmation by the Federal Police that Castagna was being investigated in relation to possible breaches of the Corporations Act.

Tending to this problematic lapse in governance, however, doesn’t address Nuix’s more immediate issue that the company doesn’t seem to have a handle on its accounting sufficient to provide shareholders with a clear or reliable guide to what it will earn this year when the books are closed off in a month.

The first hint (albeit a strong one) that Nuix would not hit the prospectus forecasts it provided when it listed last year came in February when it released its results.

This could be characterised as the downgrade you have when you are not officially releasing a downgrade. It immediately sent the shares into a gravitational plunge as it represented the first sign that the sharemarket tech darling may not live up to promises.

An official confirmation of that risk didn’t appear until April by which time investors were wondering if they had been sold a pup by its promoter and its (still) largest shareholder Macquarie Group.

Last week the company said it would set up an independent sub-committee to address investor concerns about its initial public offering process in late 2020.

Between them, the sub-committee composed of a former US ambassador and Nuix chairman, Jeffrey Bleich, former British spy Iain Lobban and fintech expert and lawyer Sue Thomas appear well credentialled to investigate the listing and governance issues.

(It’s noteworthy that this sub-committee does not include the Macquarie representative that sits on the Nuix board.)

There is no point in assembling a special board team unless they will need to come up with a credible explanation of both governance and disclosure issues and act on it.

A further downgrade on Monday only added to view that the board and management had lost the trust of investors.

The downgrade was disappointing but the near 20 per cent fall in the share price was disproportionately large. This outsized response is indicative of a lack of trust from investors despite assurances from Vawdrey that the long-term outlook for the company remained rosy.

[The first downgrade] immediately sent the shares into a gravitational plunge as it represented the first sign that the sharemarket tech darling may not live up to promises.

He characterised Monday’s downgrade as more of a timing issue. The company has changed the way it accounts for revenue from its customers. “There’s a near-term level of uncertainty regarding the precise timing, shape and scope of some large and anticipated customer contracts coming to fruition in the next few weeks,” he said.

In other words revenue might fall into this financial year or the following one. It is not exactly a good time for Vawdrey to be equivocal about revenue.

Lost in all Nuix’s drama is the still reasonable belief that the company has a good product and growth prospects. Whether it can afford to pursue its ambitions under its current management is another question entirely.