In 2014, Scott Hassan, known by some as the third Google founder, sent Allison Huynh, his wife of 13 years, a text message that their marriage was over and that he was moving out of their home.

Nearly seven years later, the pair are still locked in litigation over how to divide an estate with tech investments and prime California properties estimated to be worth billions of dollars.

The trial will offer an unusual, public peek into the details of a big-money Silicon Valley divorce. They include Hassan’s failed attempt to persuade Huynh to sign a so-called postnuptial agreement and his admission that he started a website in her name to publicise embarrassing information from her past. 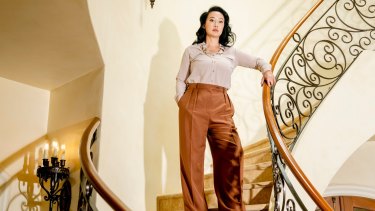 Allison Huynh is entangled in a divorce battle with Scott Hassan over how to divide an estate with tech investments and prime California properties estimated to be worth billions of dollars.Credit:NYT

Technology billionaires have typically divorced quietly behind closed doors — some of them more than a few times. While the sometimes unpleasant details of the ends of their marriages have often found their ways into the news, it is rare that they are willing to trade blows in a public courtroom and expose the complex web of their personal finances.

When Google co-founder Sergey Brin and Anne Wojcicki, who started the genetic testing company 23andMe, split after eight years of marriage in 2015, they hired a private judge to hash out the details. The recent divorces of Bill Gates and Jeff Bezos were also handled in private.

But Huynh and Hassan are headed to court in Santa Clara County, California, bereft of the secrecy that money can buy. Exactly why that has happened is a matter of dispute. She said Hassan had refused to take their case to private judging. He said a private judge would not necessarily keep proceedings private and would require them to pay for a retired judge or neutral attorney.

Huynh has accused Hassan of engaging in “divorce terrorism,” using legal tactics to drag out the proceedings. In an interview, Huynh, 46, said Hassan had told her that he planned to “bury her” and make sure that she “gets nothing.”

Hassan, 51, denied saying that in written answers to questions from The New York Times. “At the end of a relationship and through a divorce this lengthy, things are never easy, and no one is at their best,” he wrote.

Hassan is not a household name, certainly not like Brin or Larry Page, the men credited with starting Google. But without Hassan’s contribution, Google may have been nothing more than a computer science project at Stanford University.

He was a research assistant at Stanford’s computer science department, which made him the resident programmer for many doctoral students, when he met Page, a doctoral candidate. He rewrote the code for a slow web crawler that Page had created to understand the relationship between links on different websites. He also worked with Brin to build a search engine, which eventually became Google.

When Page and Brin founded Google in 1998, Hassan bought 160,000 shares for $US800. When Google went public in 2004, the shares were worth more than $US200 million. The shares, now in Google’s parent company, Alphabet, would be valued at more than $US13 billion today. 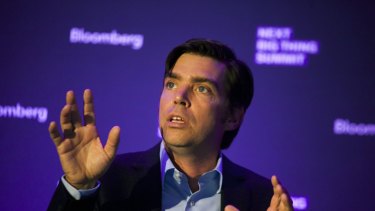 While Hassan never worked for Google, he was one of the founders of a company called eGroups, which was sold to Yahoo in 2000 for $US432 million in stock. He also started two robotics firms.

Hassan met Huynh through mutual friends at Stanford in 2000. She had emigrated to the United States from Vietnam after the war and attended Stanford on scholarship. Huynh said she had dropped out a few years before meeting Hassan to pursue opportunities during the dot-com boom. She was working as a consultant and web developer, building websites for clients such as Wells Fargo.

In 2001, five days before Christmas, they got married at the Little White Chapel in Las Vegas. There was no discussion of a prenuptial agreement, and they barely discussed finances, both of them said.

Huynh said she had supported the family financially in the early years. She said Hassan had $US60,000 in debt, so she often paid for food, travel and entertainment — including their engagement party, which Page and Brin attended.

Hassan said that was not true and that by the time they were married, he was financially secure and debt-free. In addition to the Google stock, which was still a speculative investment at the time, he owned a house in San Francisco as well as $US8 million in Yahoo stock — which had lost much of its value after the sale of his company — and Amazon stock, he said.

Huynh said she had put her career on hold to raise their children and assist Hassan with the business. The issue of money came up four years into their marriage, around the time of their oldest daughter’s second birthday.

Less than a year after Google went public, Hassan proposed a deal in exchange for waiving any future claims to marital assets. Hassan offered Huynh $US20 million in Google stock — less than 10 per cent of his shares — and half of three Bay Area real estate properties: houses in Palo Alto and San Francisco and a commercial building in Menlo Park. She felt blindsided and hurt. She refused.

Hassan said he had proposed the agreement to share some of his newfound wealth.

Later that year, they moved into a bigger Palo Alto home in one of the city’s most affluent neighbourhoods. Huynh lives in the 7,500-square-foot home, valued at $US20 million on Redfin, with the children.

Still, Huynh said there was little indication that Hassan was unhappy. But in 2014, while she was on a business trip for MyDream, a virtual reality company she started in 2011, she received a text message from Hassan informing her that the marriage was over and that he was moving out, she said.

Hassan said it should not have come as a surprise to her. He said they had a big fight a few days earlier, when she falsely accused him of infidelity in front of their children. She said she had never accused him of cheating but questioned his whereabouts during long absences from the house.

When Larry Page and Sergey Brin founded Google in 1998, Scott Hassan bought 160,000 shares for $US800. When Google went public in 2004, the shares were worth more than $US200 million. The shares, now in Google’s parent company, Alphabet, would be valued at more than $US13 billion today.

After a few attempts at counselling, they separated in January 2015.

The couple officially dissolved their marriage in May 2020 and agreed to joint custody of their three teenage children.

Next week’s trial is part of a drawn-out legal process to divide the estate and resolve other financial matters including spousal and child support. California is one of nine states where assets acquired during marriage are divided evenly in a divorce.

As the trial has approached, the feud has taken a harsh turn. This month, Huynh found a website — allisonhuynh.com — with her photo, links to her social media accounts and news reports about her. It also included a legal filing about her from 20 years ago, which was no longer available online and included salacious details about a past relationship.

The website concealed the identity of the person behind it. But Huynh eventually discovered that someone named Scott Wendell had uploaded the legal filings. Wendell is Hassan’s middle name.

Hassan admitted that he had made the site in “a moment of frustration” because Huynh and her lawyers were telling “one-sided stories” to the press. “I realise that this was not the right way to go about this, and it only ended up making our dispute more public and tense,” he wrote in an email to the Times. Hassan said he had taken down the site.

Huynh, who finished her degree at Stanford last year, said the website could have hurt her reputation at a time when she was trying to launch new businesses, including a mobile game, the Adoraboos, which aims to teach children about blockchains and cryptocurrencies.

Hassan said that while they did not agree on what was fair, he did not believe that his ex-wife should get nothing.

“I have no doubt we will land on a resolution that makes her a woman with generational wealth,” Hassan wrote.