ABC news boss Justin Stevens will split his time between the national broadcaster’s inner-city headquarters and its newly formed Parramatta office when about 300 staff relocate at the end of 2023.

The government-funded broadcaster announced last week it would move ABC’s Sydney-based radio and news teams to Parramatta Square in an effort to keep 75 per cent of its workers outside Ultimo, and reflect the broader Australian community. The proposal to move, first outlined in 2020, will be reviewed by the parliamentary standing committee on public works. 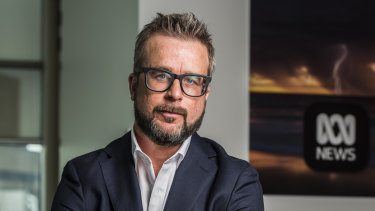 ABC news director Justin Stevens said he wanted to stamp out racism at the public broadcaster.

Stevens said news of the relocation was well received by staff, but conceded people would have questions and concerns relating to their individual circumstances. He said the move was important for news-gathering.

“I’m going to work out there,” Stevens, who has visited the new site, said. “I want to spend a bit of time in both places, but I’m really pumped. I love Parramatta, I think it’s a really important show of intention by the ABC around where we locate our journalists. I think it will be really positive.”

The comments by Stevens were made in a wide-ranging interview which will appear in The Sydney Morning Herald and The Age this month. The ABC announced the relocation plans to staff working in Ultimo in its five-year plan in 2020. It then put out a tender for a property advisor about suitable locations for the facility, before announcing last week the new office would be located at Parramatta Square, a $3.2 billion project developed by Walker Corporation.

There were about 1700 staff working in Ultimo before the coronavirus pandemic. Stevens said the ABC would keep its studio in Ultimo, should interview subjects be unable to travel to the new campus.

“We are still going to have studio facilities in Ultimo, as well as Parramatta,” Stevens said. “Secondly, we’ve got the ability to go to people with camera crew. The one upside of the pandemic is the resourcefulness… we can do a Zoom or Skype interview with people in a way we couldn’t previously.

“If there’s an impact, though, that people who are located in Western Sydney or close to Parramatta are more likely to be able to appear on the ABC because there’s a studio, that is also a really great outcome.”

The location of ABC’s headquarters was a major point of contention for the previous government, particularly because of a three-year funding freeze introduced in 2018. Newly appointed communications minister Michelle Rowland said earlier this year the ABC was meeting its charter obligations by moving some staff members to Parramatta.

The federal government is conducting a feasibility study into whether to relocate multicultural broadcaster SBS to Western Sydney. At least four councils – Canterbury-Bankstown, Liverpool, Parramatta and Blacktown – are lobbying to become SBS’ home.

Stevens, the former executive producer of the ABC’s flagship program 7:30, was appointed news director in March. He replaced Gaven Morris, who spent his six years at the helm trying to evolve the ABC for the online world.

Stevens said his main focus would be making sure the public continued to trust the national broadcaster as it evolved.

“The challenge ahead for us is how we retain the quality and impact of what we do, retain the trust of the public so that they continue to see immense value in what we do at a time when there’s growing distrust in institutions from the public. Our journalists are generating more material than they ever had to because of the rise of digital… we have to find a way to make that sustainable, but also to continue the trajectory of digital transformation.”