Airbus's decision to cut output of its best-selling jet by a third amid coronavirus marks a huge shift for the European planemaker, which has enjoyed virtually unbroken growth since it began competing toe-to-toe with Boeing almost 20 years ago.

The company's first significant cut in A320-family output, to 40 jets a month, brings production to the lowest level since 2012 and will be implemented in May or June, unions said. 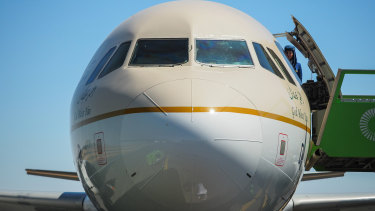 Onlookers believe Airbus will have to cut more in the future. Credit:Bloomberg

Airbus shares, which have fallen around 50 per cent this year due to the crisis, wobbled on Thursday but ended up 2 per cent as several analysts said the company had acted swiftly to reset output.

But with all but a handful of airlines shunning deliveries as they hoard cash to survive the crisis, several industry officials and economists suggested the rate may be optimistic.

"We have too many planes," said Avitas senior vice-president Adam Pilarski, who has long warned of a jet market bubble – though nothing on the scale of the meltdown in air travel seen since quarantines rippled across the globe last month.

Airlines are warning of $US252 billion ($398 billion) in lost revenues and 38 per cent lower traffic, many times higher than past corrections.

With Boeing's competing 737 MAX still grounded after more than a year of safety reviews following two accidents, Airbus signalled on Wednesday that it was ready to act again if needed.

"It is a first step," said Rob Morris, chief consultant at UK-based Ascend by Cirium, adding more reductions could be needed because of a large potential jet surplus.

That contrasts with 2001 when Boeing cut output sharply after 9/11 attacks, while Airbus – reluctant then as now to cut output due to rigid European labour laws – spotted an opening with upstart budget carriers and went on a selling spree. 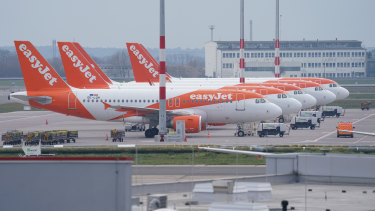 The travel industry has been savaged by the coronavirus pandemic. Credit:Getty Images

One such carrier, easyJet, is now one of Airbus's top customers and says it is deferring deliveries.

On Wednesday, Airbus was forced by the scale of the crisis to act as Boeing's 737 MAX remained grounded for safety reasons – having also played an unplanned role in curtailing supply that one source likened to a "spent shock-absorber".

Airbus "will have to share the (market) pain with Boeing," Agency Partners analyst Sash Tusa said in a recent note.

To defend its new output rate, experts said Airbus appeared to be banking on a sharp increase in retirements of older jets, echoing moves seen after 9/11 and the 2008 financial crisis.

Airlines have an incentive in bad times to idle jets early to avoid costly scheduled repair visits. But low oil prices like those seen today tend to push airlines in the other direction.

According to Ascend by Cirium, the new Airbus target assumes every plane delivered this year will replace an older one being taken out of service. That suggests borrowing some demand from future years when some of those jets were due to be retired.

Other tools used in past crises include pressure on leasing companies to take delivery. They place large speculative orders for good prices and are expected to pull their weight in a downturn – but they too are reeling as airlines hand back jets.

Even so, market sources said, Airbus will need to make use of its relatively strong balance sheet to spur deliveries by providing finance to airlines or offering advances or discounts.

Unlike in past downturns, the industry is currently facing a fundamental drop in demand everywhere, meaning there is little room for error if Airbus's output calculations go awry.

"Right now it looks like a tug of war between Airbus and airlines to see who should store some of those planes," an aircraft finance veteran said, asking not to be named.