"I have been recuperating well and getting stronger every day, and I am happy to be back to work this week – albeit working remotely like so many of you," Dimon wrote in a memo to staff on Thursday (US time). 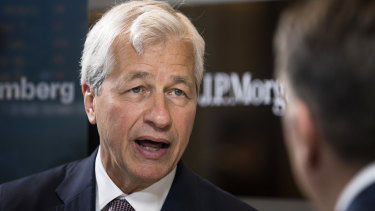 Jamie Dimon is the only Wall Street leader left who steered a major US bank through the financial crisis.Credit:Bloomberg

Dimon, 64, underwent emergency heart surgery on March 5 and temporarily handed control of the largest US bank to lieutenants just as the coronavirus started rattling markets and the global financial system. At the helm for almost 15 years, he's the only Wall Street leader left who steered a major US bank through the financial crisis, and his firm last year set a profit record for the nation's lenders.

In the four weeks he was away, the biggest US bank temporarily shifted most of its global staff to remote work, shut 20 per cent of its US branches and gave extra pay to staff who had to continue to come into the office amid the pandemic. JPMorgan also is among eight giant US banks that vowed to halt buying back their own shares through the second quarter to focus on supporting clients and the country.

Co-Presidents Gordon Smith and Daniel Pinto handled Dimon's responsibilities as acting co-CEOs while he was recovering, testing the bank's succession plans and reviving discussions about how prepared the next generation is to eventually take the reins permanently. Smith runs the firm's massive consumer unit and Pinto manages the corporate and investment bank, which together contribute nearly 80 per cent of the firm's revenue.

Dimon, a top spokesman for the industry, felt chest pain before work in early March, checked himself into the hospital and was diagnosed with acute aortic dissection, a serious condition involving a tear in the large blood vessel branching off the heart. Catching the problem early may have saved his life.

While he was recovering, policy makers grappled with dire warnings about the economic effects of the coronavirus pandemic and governments stepped up efforts to keep millions of people at home in an effort to stem the spread of the highly contagious virus.

JPMorgan plans to announce first-quarter earnings later this month, providing a first glimpse into the pandemic's impact on US banks.