The head of Australia’s largest plastics manufacturer has raised alarm at fresh warnings of an east-coast gas shortfall next year and has called on governments and gas exporters to find a solution that keeps the fuel flowing and affordable for the domestic market.

Qenos employs more than 550 workers across its operations in Melbourne and Sydney that use natural gas to make polyethylene, a material used in a range of everyday plastic products, but the company has come under escalating pressure amid this year’s soaring prices for the portion of gas it buys on the wholesale market. 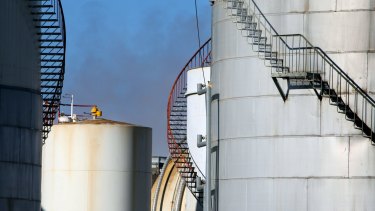 Prices for long-term gas supply contracts next year are also at risk of increasing because of higher wholesale and international prices.

“As an Australian manufacturer dependent on a reliable supply of competitively priced energy inputs, the findings of the latest Australian Competition and Consumer Commission (ACCC) report projecting a material shortfall in gas is a real concern.”

This week, the ACCC said a shortage of 56 petajoules was now expected in 2023 – about 10 per cent of domestic demand. The shortfall is the largest since the ACCC began its inquiry into the east-coast gas market in 2017.

ACCC chair Gina Cass-Gottlieb found the nation’s east-coast producers of liquefied natural gas (LNG) were planning to withdraw 58 petajoules more from the domestic market than they expected to supply.

“This could place further upward pressure on prices and result in some manufacturers closing their businesses,” she said.

While Australia is one of the world’s top gas exporters, massive amounts are locked in to contracts to be sold to overseas buyers, or are in faraway parts of the country where it is expensive or impossible to supply demand centres in the south.

Victoria’s offshore gas fields in Bass Strait, which have traditionally supplied up to half of the eastern seaboard’s gas demand, are in rapid decline.

Qenos said maintaining sovereign capability and local manufacturing, which depended on gas for energy or as a feedstock, had “never been more important”.

“As the world’s largest liquefied natural gas exporter, surely we can find a solution that keeps gas affordable and available for Australian businesses and households,” Bell said.

Resources Minister Madeleine King on Monday announced she was preparing to issue a “notice of intent” to invoke the Australian Domestic Gas Security Mechanism, a policy that would curb some exports of LNG to shore up domestic supplies.

Queensland’s large gas producers, which are preparing a new agreement to boost supplies, insist there is no shortage of gas, but say the ACCC report underscores the urgent need to develop more gas supplies close to the demand centres in the southern states that need the fuel the most.

Damian Dwyer of Australian Petroleum Production and Exploration Association points out that the ACCC report identified 167 petajoules of uncontracted gas that could be made available for supply into the domestic market next year.

“This is more than enough gas to ensure that no shortfall occurs,” he said.

“Australia cannot allow our economy to be hollowed out, our manufacturing sector to be savaged, our transition to cleaner energy stalled and our household energy bills to skyrocket because of the planning and market failures of Australia’s gas export industry,” said Ben Eade of Manufacturing Australia, whose members include companies such as BlueScope Steel, Brickworks, Cement Australia and CSR.

“We implore the government to act strongly on the recommendations in the [ACCC] report, and welcome their commitment to doing so.”

On Tuesday, billionaire Andrew “Twiggy” Forrest’s Squadron Energy, which is building the nation’s first shipping terminal capable of receiving cargoes of LNG, said the project had the capacity to deliver 130 petajoules of gas a year, and was the “only solution” that could supply gas directly into east-coast network by 2023, when it’s needed.

“The great thing about this terminal is that it has the potential to ship gas from Queensland directly into NSW, bypassing the congested pipeline infrastructure,” Hanly said.

Squadron says the construction of the Port Kembla wharf is 80 per cent complete and remains on track for first gas at the end of next year. Electricity and gas retailer EnergyAustralia has already signed on to buy LNG from Squadron’s proposed Port Kembla project. However, it has struggled to sign up other large customers, raising doubts about the terminal’s economics amid ultra-high prices for uncontracted LNG cargoes in Asia.

The project is one of several being pursued in south-eastern Australia as short-term solution to boost gas supplies. Viva Energy, owner of the Geelong oil refinery, is proposing to develop Victoria’s first LNG import terminal in Corio Bay.