Hollywood premieres have been postponed. The US Open is playing to empty stands. But no pandemic was going to stop Mercedes-Benz from unveiling its flagship luxury car on Wednesday (German time), along with a state-of-the-art factory to build it.

The S-Class dominates the high end of the luxury car market and is Mercedes' most profitable vehicle. The latest version, the first complete redesign in seven years, is crucial for the company as it recovers from a sharp drop in sales that pushed the company into the red during the first six months of 2020. 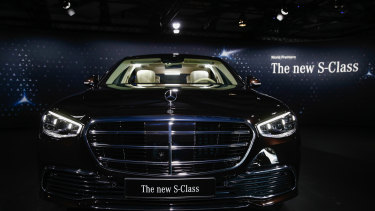 The release is crucial for the carmaking giant after it slipped into the red. Credit:Bloomberg

Ola Källenius, the chief executive of Mercedes' parent company, Daimler, said that executives decided not to let the pandemic — which has interrupted supply lines, shut factories and depressed sales — disrupt the launch at a colossal gray, wedge-shaped building bordering farmland in Sindelfingen, a suburb of Stuttgart.

"From a business point of view, it is very important to us," Källenius said in an interview.

Cynics may regard the S-Class, which will have a base price north of $US100,000 ($136,000) in the United States, as a land yacht for plutocrats, a discordant display of wealth amid rising unemployment and sagging growth. And it is not an electric vehicle, sales of which have climbed during the pandemic even as traditional cars have fared poorly.

There is so much at stake for the economy

Life is getting worse for people outside the S-Class' lofty income bracket. Unemployment in the 19 countries that use the euro edged up in July, to 7.9 per cent from 7.7 per cent in June, according to figures published Tuesday. Economists say joblessness could spike in coming months as government-subsidised furlough programs expire. Coronavirus infections are surging in Spain.

There are also signs of deflation, a general decline in prices that can squelch economic growth. Eurozone inflation fell at an annual rate of 0.2 per cent in August, according to the European Union.

In this climate, can anyone justify a car with a sound system that has 30 speakers, passenger seats that can massage their occupants 10 different ways and a voice-command system that understands 27 languages?

But for the region around Stuttgart, Daimler's home base, the S-Class represents jobs and a commitment to Germany by Daimler.

"There is so much at stake for the economy," said Winfried Kretschmann, prime minister of the state of Baden-Württemberg, where Daimler has a huge presence.

"The auto industry is in the most far-reaching transformation in history," Kretschmann said at an event to dedicate the new plant. "That is challenging even for a champion like Daimler."

Kretschmann's support is notable because he is a member of the Green party, which has often been critical of carmakers. But Kretschmann praised Daimler's efforts to make transportation more sustainable.

Solar panels on the roof of the plant, known simply as Factory 56, provide an average of 30 per cent of its electricity needs. On sunny days any surplus solar power is stored in an array of used auto batteries. Skylights reduce the need for artificial lighting. The hybrid version of the new S-Class can travel 60 miles solely on battery power, according to Mercedes.

Appearing on the factory floor before an audience of reporters and local political leaders, who were issued black face masks printed with the Mercedes logo, Källenius repeated his vow to make Mercedes' new car fleet climate neutral by 2039.

"Our goal is to decouple economic growth from CO2 growth," he said.

A few minutes later, Källenius, Kretschmann, a labour leader and an assembly line worker gave the signal for the S-Class assembly line to begin rolling.

Car bodies, held at their roofs by giant blue tongs, began rotating amid the clang of machinery. Self-driving robot carts darted by carrying tools and parts. The first finished vehicles, almost all of them black, reached the end of the production line, where they were inspected closely by workers in black-and-gray uniforms.

Mercedes will begin delivering cars to German customers in December and to buyers in the United States and China early next year.

Factory 56 is also an example of how manufacturing copes with the pandemic. About 2,500 people, divided between two shifts, work at the factory. Social distancing is not that difficult considering that the factory covers an area as big as 30 football fields. On Wednesday, all employees wore masks and most also wore gloves, but otherwise the production operation appeared normal. 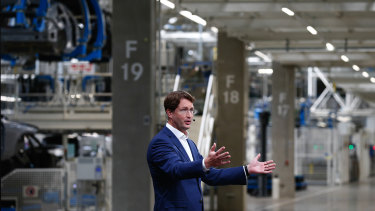 Ola Källenius, the chief executive of Mercedes’ parent company, Daimler, said that executives decided not to let the pandemic disrupt the launch of the factory and new vehicle.Credit:Bloomberg

Källenius said that Daimler, which is also a major producer of trucks and buses, did not need to close any factories for health reasons or because of shortages of parts. In some cases, local authorities ordered factories to close, he said, or the company dialled back production because of slack demand.

Factory 56 will initially produce only S-Class vehicles, but it is designed to convert quickly to produce other Mercedes vehicles. Next year the EQS, an electric luxury car that is the company's much delayed answer to Tesla, will roll from the same assembly line. Tesla has been stealing sales from Mercedes as well as BMW and Audi, and the German luxury automakers have struggled to respond with their own electric models.

Coincidentally, Elon Musk, Tesla's chief executive, visited Berlin unexpectedly. He was scheduled to meet with Peter Altmaier, the German economics minister. The main topic was vaccines, not the factory Tesla is building outside Berlin, according to German press reports. The ministry did not respond immediately to a request for comment.

Still, Musk's visit was a reminder that Tesla has a huge head start over Mercedes and other carmakers in battery technology. Mercedes is betting that its ability to deliver a smooth ride, creature comforts and meticulous workmanship, as epitomised by the S-Class, will allow it to ultimately triumph. While Tesla cars are widely admired and even coveted, some customers have complained that their cars were delivered with chipped paint, large gaps between body panels and other defects.

"We know how to make a luxury car," Källenius said.