Mexico Reaches Water Deal with U.S. Ahead of Saturday Deadline

Today, Representative and civil rights icon John Lewis was honored at the Ebenezer Baptist Church in Atlanta, Georgia, his final resting place. Following speeches from fellow colleagues, friends, family, and former Presidents George Bush and Bill Clinton, former President Barack Obama ended the procession with a powerful eulogy that reflected on Lewis’s lasting legacy on the United States, calling him an “American whose faith was tested again and again to produce a man of pure joy and unbreakable perseverance.”

“I’ve come here today because I, like so many Americans, owe great debt to John Lewis and his forceful vision of freedom,” he began. “Now, this country is a constant work in progress. We’re born with instructions to form a more perfect union. Explicit in those words is the idea that we’re imperfect, that what gives each new generation purpose is to take up the unfinished work of the last and carry it further than any might’ve thought possible. John Lewis, first of the Freedom Riders, head of the Student Nonviolent Coordinating Committee, youngest speaker at the March on Washington, leader of the march from Selma to Montgomery, member of Congress representing the people of this state and this district for 33 years, mentor to young people—including me, at the time—until his final day on this earth, he not only embraced that responsibility, but he made it his life’s work, which isn’t bad for a boy from Troy.”

Obama then detailed Lewis’s childhood as a young Black boy growing up in the Jim Crow South. “As a boy, John listened through the door after bedtime as his father’s friends complained about the [Ku Klux] Klan,” he continued. “One Sunday as a teenager, he heard Martin Luther King preach on the radio. John Lewis was getting something inside his head. An idea he couldn’t shake took hold of him—that nonviolent resistance and civil disobedience were the means to change laws but also change hearts and change minds and change nations and change the world.”

While participating in desegregation actions as a young man, Lewis was arrested multiple times. Obama referenced these incidents in his eulogy, saying, “John got a taste of jail for the first, second, third—well, several times. But he also got a taste of victory, and it consumed him with righteous purpose, and he took the battle deeper into the South.”

Obama also noted the difference between modern activism in the digital age and the type of activism Lewis participated in during the civil rights movement of the ’60s. Months before the official Freedom Ride, Lewis and fellow activist Bernard Lafayette purchased tickets to a Greyhound bus and refused to budge from their front seats.

“Few knew what they were up to and at every stop through the night, apparently, the angry driver stormed out of the bus and into the bus station, and John and Bernard had no idea what he might come back with or who he might come back with,” said Obama. “Nobody was there to protect them. There were no camera crews to record events. Sometimes, we read about this, and we kind of take it for granted—or at least, we act as if it was inevitable. Imagine the courage of two people Malia’s age, younger than my oldest daughter, on their own to challenge an entire infrastructure of oppression. John was only 20 years old when he pushed all 20 of those years to the center of the table, betting everything that his example could challenge centuries of convention and generations of brutal violence.”

The former president acknowledged that while obvious relics of a Jim Crow past are now behind us, the battle for true equality still lies ahead. “He knew that the march is not over, that the race is not yet won, that we have not yet reached that blessed destination, where we are judged by the content of our character,” he said. “He knew from his own life that progress is fragile, that we have to be vigilant against the darker currents of this country’s history—of our own history. With our whirlpools of violence and hatred and despair that can always rise again.” 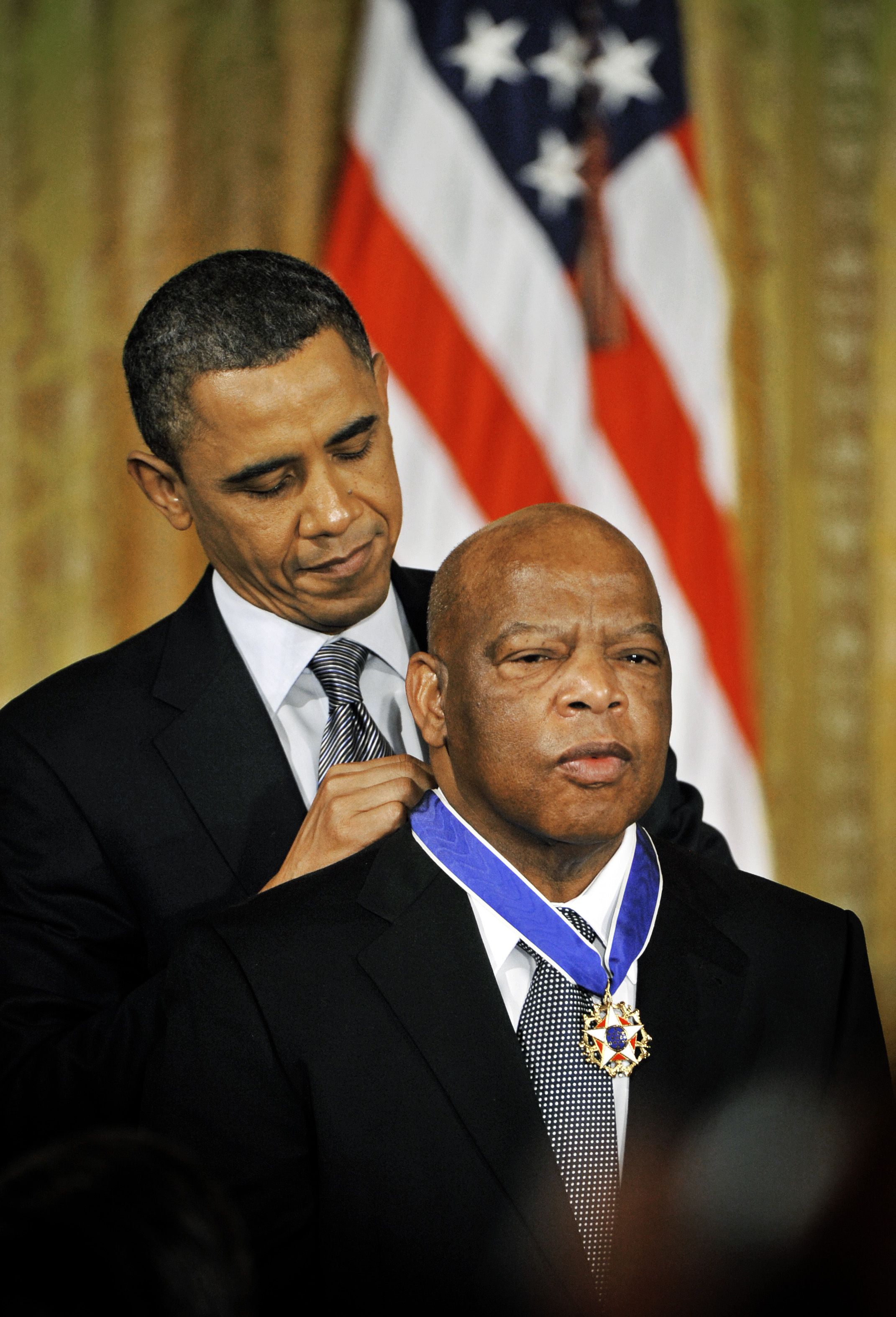 Obama then referenced the recent police killing of George Floyd, a Black man who died after an officer kneeled on his neck for several minutes. Floyd’s death has since sparked daily insurrections nationwide against the status quo and racial inequality. “George Wallace may be gone,” said Obama, referring to the former conservative Alabama governor remembered for his segregationist views, “but we can witness our federal government sending agents to use tear gas and batons against peaceful demonstrators.”

The former president additionally referred to the 2013 Supreme Court case Shelby County v. Holder, which severely gutted certain protections enshrined under the 1965 Voting Rights Act. Said Obama, “It was an attack on what John fought for.”

He called upon listeners to rise up and act in order to protect the democracy that Lewis fought for. “Let’s honor him by revitalizing the law that he was willing to die for,” Obama said to resounding applause. “Once we pass the John Lewis Voting Rights Act, we should keep marching to make it even better, by making sure every American is automatically registered to vote, including former inmates who’ve earned their second chance, by adding polling places and expanding early voting, and making Election Day a national holiday. So if you are somebody who’s working at a factory or you’re a single mom who’s got to go to her job and doesn’t get time off, you can still cast your ballot.”

Obama also acknowledged the lack of civic engagement in large swaths of the American population. “Even if we do all this, even if every bogus voter suppression law was struck off the books today, we’ve gotta be honest with ourselves that too many of us choose not to exercise the franchise. Too many of our citizens believe their vote won’t make a difference,” he said. “So we’re also going to have to remember what John said. ‘If you don’t do everything you can do to change things, then they will remain the same. You only pass this way once. You have to give it all you have.’ As long as young people are protesting in the streets hoping real change takes hold, I’m hopeful, but we can’t casually abandon them at the ballot box.”

You can watch his full speech in the video above.