The new law says someone is eligible for benefits if “the individual has to quit his or her job as a direct result of COVID-19,” the disease caused by the virus that has already killed more than 10,000 Americans.

But the guidance the Trump administration released to states on how to implement the new rules suggests that workers are not eligible if they quit to avoid catching or spreading the virus. The guidelines say that a person only “has to quit” if they’re absolutely forced to do it.

Workers are eligible for the benefits if they or a family member catch the coronavirus, if their kid’s school shuts down or if their employer is forced to close, among other extenuating circumstances laid out in the guidance.

“Quitting as precaution is not one of them,” a spokesperson for the U.S. Labor Department told HuffPost in an email.

Senate Republicans complained about the coronavirus legislation’s unemployment provisions before they voted to support the measure, which also included direct payments to households, funding for hospitals and billions in business subsidies. Republicans did not specifically complain about the new eligibility provisions ― which represented the biggest expansion of unemployment insurance since the program’s creation in the 1930s ― but they said a separate provision boosting weekly benefits by $600 for four months would drive people to quit.

“This bill creates an incentive for people to be unemployed for the next four months,” Sen. Rick Scott (R-Fla.) said.

The unemployment argument encapsulates the bigger debate between public health experts who say people need to remain apart to control the pandemic and officials like President Donald Trump, who would rather see economic activity resume more quickly, even if it means more people die. 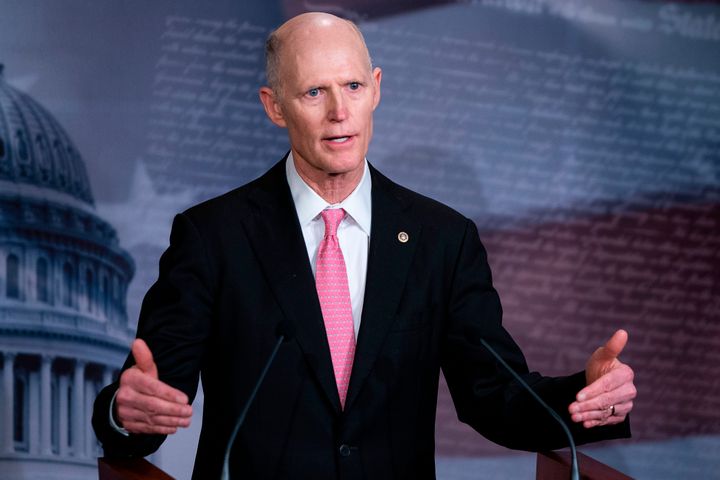 The Labor Department’s guidance seems designed to prevent people from quitting if they can avoid it, even if their job puts them at risk of exposure to the virus.

But it’s not clear if states will enforce that policy as strictly as the federal government has suggested. Unemployment insurance is a state-federal program where states have leeway to make their own rules within federal guidelines.

Kentucky, for instance, has advised people that the new eligibility standard “includes individuals who have left their jobs because they have a reasonable fear that exposure to COVID-19 at their workplace will cause a negative impact on their health and they want to stay home.”

(That message appeared on the state’s website last week, after the law had passed but before the new federal guidance had come out.)

David Goud of Louisville, Kentucky, said he quit his job at a Bass Pro Shops location in nearby Indiana at the end of March because he didn’t feel safe. His job involved using communal iPads to sign up customers for Bass Pro credit cards.

“Social distancing was not an option,” Goud said. “When I tried to ask about hand sanitizer or increased cleaning of the iPads, I was told by my boss that we had no hand sanitizer and that he would clean the area and iPads twice a week.”

Bass Pro Shops have remained open in several areas because they sell guns, which state and local authorities have deemed “essential” even as other businesses have been ordered closed. The company has said it’s taken steps in response to the pandemic, such as allowing no more than 50 customers in a store at a time.

Goud said he’s healthy, but at 51 years old, he felt he was at a higher risk of severe illness, and he didn’t want to expose his wife, either. He said he thought it would be smart for him to heed the advice of public health experts and Kentucky Gov. Andy Beshear (D), who urged Kentuckians to stay home and apply for unemployment insurance if they lost their jobs.

“I quit for my safety and the safety of my family,” Goud said. “I took the advice of my family and governor, the latter promising a financial safety net if I complied with the guidelines. I am not sure if that net will appear, but I had to jump anyway.”

Goud said he applied for unemployment insurance last week, about a week after he quit, and has no idea if he’ll qualify.

HuffPost readers: Did you quit working because of coronavirus even though you weren’t sick or caring for a sick family member? Tell us about it ― email [email protected] Please include your phone number if you’re willing to be interviewed.

The federal guidelines allow precautionary quitting under some circumstances, said Michele Evermore, an unemployment policy expert with the National Employment Law Project. The only catch is that people will have to be able to prove a COVID-19 diagnosis.

“If a grocery worker was exposed to someone who they can confirm was diagnosed, then that counts as a legitimate precaution under the regs,” Evermore said in an email. “But again, with testing the way that it is going, that is hard to prove.”

Another example of someone who quit their job who would be eligible would be someone who has no sick leave, was diagnosed as having COVID-19, recovered from the illness, “and although the individual no longer has COVID-19, the illness caused health complications that render the individual objectively unable to perform his or her essential job functions, with or without a reasonable accommodation.”

The new law has also made unemployment insurance available for the first time to people who are self-employed, part-time workers and independent contractors ― including so-called “gig” workers such as rideshare drivers.

But the guidance suggests that an Uber or Lyft driver who simply followed public health warnings and stopped driving to avoid spreading the virus would not qualify for benefits. Rideshare drivers generally set their own schedules. No city has ordered rideshare cars off the road as part of a social distancing campaign.

A rideshare driver would be eligible, the Labor Department spokesperson said, “if the worker’s immune system is compromised by virtue of a serious health condition and is therefore advised by a health care provider to self-quarantine in order to avoid the greater-than-average health risks if he or she were to become infected by the coronavirus.”

The rules are too narrow, said Andrew Stettner, an unemployment policy expert and senior fellow with The Century Foundation, though he said he hoped states would be reasonable with their implementation.

“Not everyone can get a doctor’s note saying that they should suspend their self-employment or even quit a job to avoid exposure to the coronavirus,” Stettner said.