Its half-year accounts at the time revealed uncertainty as to whether it could continue as a going concern due to the potential non-renewal of a licence to operate its sole processing plant in Malaysia.

The company’s share price had been pummelled by the existential threat, and conglomerate giant Wesfarmers took advantage of the uncertainty with a low ball $2.25-a-share takeover bid. 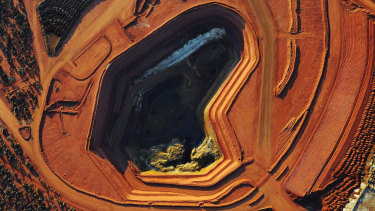 Sales of the 17 ores labelled rare earths are expected to soar with the rising demand for clean energy, electric vehicles and consumer electronics. Credit:Bloomberg

How times have changed. Lynas shares soared above $6 last week when chief executive Amanda Lacaze presented better-than-expected results to investors, with a net profit of $40.6 million, up from $3.9 million in the prior first half.

Now, the threat emerging for Lynas is a novel one: Competition.

Lynas’ soaring share price reflects the optimism that the rare earths market is finally ready for prime time, and other local companies are following in its footsteps.

Lacaze took umbrage last week at suggestions that Lynas’ interim report was “light” on detail compared to these potential rivals. “I guess others need to pad their presentations with where they have light or no operating data. I would rather our numbers speak for themselves. And our numbers are excellent,” she said.

She also had a clear message on rare earth prices, which have soared and dived over the years in speculative bursts: The rollercoaster is over.

The underlying macro-economic fundamentals of rising electric vehicles demand, green energy solutions such as wind power, consumer electronics and automation were starting to underpin the favourable prices the company is getting for these ores, Lacaze said and made it clear that no one is better placed than Lynas to capitalise on this. 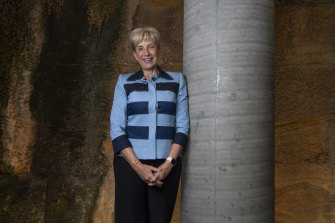 “Rare earths are an excellent investment opportunity for exposure to the global megatrends that will shape our economies and our behaviours over the next decade,” she said. “And Lynas, amongst all the opportunities, is uniquely positioned to respond to those megatrends.”

You don’t have to look far to find evidence of these megatrends. This week, Volvo joined General Motors, Ford, Audi and other major car manufacturers in laying out a roadmap to stop making fossil-fuel-powered cars by 2030.

US President Joe Biden has vowed to replace his government’s 650,000 car fleet with electric vehicles and his $US1.9 trillion ($2.4 trillion) stimulus package includes hundreds of billions of dollars earmarked for clean energy projects.

It is all good news for rare earths – the 17 elements crucial to the manufacture of many hi-tech products such as mobile phones, electric cars and wind turbines.

This includes Neodymium and Praseodymium (NdPr), key elements that Lynas produces, which are crucial ingredients in electric vehicles and wind turbines. A new Tesla needs about two kilograms of NdPr, and new wind turbines around 150 kilos.

Australia’s new F-35 jet fighter requires more than 400 kilograms of rare earth materials, according to a US congressional report.

Lacaze did not name her new rivals, but it is not hard to find them.

Hastings was happy to refer its investors to the recent Lynas results showing prices for NdPr had reached $US55,000 a tonne two months ago – “further highlighting the swift re-rating of the NdPr sector,” it said. The company also reported that the price of NdPr oxide has soared from about $US70,000 a tonne a month ago to almost $US86,000 now.

“The rare earths thematic is firing and Hasting’s strategic position warrants a rerate,” he said.

Iluka Resources has also beefed up plans to invest more than $1 billion to replicate Lynas’s miner/processor operations, all within Australia. Goldman Sachs rated Iluka a buy based on its “compelling mineral sands and rare earths potential” which currently consists of a feasibility study to be completed in 12 months.

The federal government jumped onto the bandwagon on Thursday, announcing a 10-year “road map” to create more value-added mineral processing capacity in Australia.

It’s part of a broader push to make Australia one of the developed world’s linchpin suppliers of rare earths and critical minerals as concerns grow over China, which dominates supply.

Lynas has already received financial support from the US government to set up processing in the country following America’s own concerns about China’s choke-hold on this market. China controls 80 per cent of the rare earths market, with Lynas currently acting as the only significant producer outside of the country.

But it doesn’t mean rare earth prices, and rare earth stocks, have left behind the turbulence that saw many firms collapse over the last decade.

Ord Minnett’s Kelly downgraded Lynas from a buy recommendation to “lighten” after the stock more than doubled since July last year, citing concerns that current NdPr prices are unsustainable in the near term.

“Whilst an important value driver for Lynas earnings, NdPr prices are typically unreliable as they represent a small (40,000 tonnes per annum), and opaque Chinese domestic market,” Kelly said.

To give an idea of how this compares to the major resource markets, the iron ore sector shipped about 900 million tonnes last year and copper topped out at 920 million tonnes.

Not even Lacaze is getting carried away with the current share price.

“We don’t get drunk on the price,” she told analysts and investors last week.

“We don’t participate in forecasting what’s going to happen with price. What we do do is source as much market intelligence as we can on whether the price changes have a foundation in actual behaviour, or whether they are speculative. And certainly, at this time, we continue to see strong demand.”