Five of the nation’s top government watchdogs have been stripped of their positions by President Donald Trump in recent weeks, prompting an outcry from critics who say the president is silencing those with investigatory powers over his administration.

But their ouster didn’t trouble most Senate Republicans, who maintain that it is within Trump’s authority to remove inspectors general as he wishes.

“He gets to hire and fire under the Constitution all people under the executive branch,” Senate Majority Leader Mitch McConnell (R-Ky.) told reporters on Tuesday. 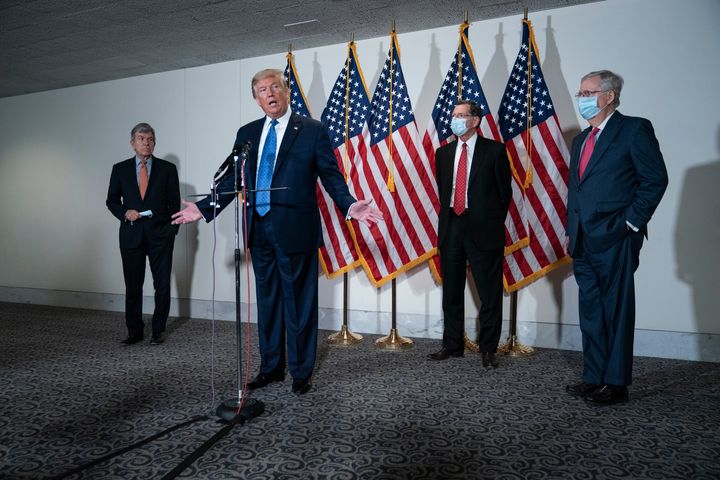 In a late Friday evening announcement, Trump notified Congress he was removing State Department Inspector General Steve Linick from his post and replacing him with Stephen Akard, a trusted ally of Vice President Mike Pence.

The move follows similar personnel changes at government watchdog offices in charge of the departments of Defense, Health and Human Services, Transportation, and the intelligence community.

Linick was reportedly investigating why Secretary of State Mike Pompeo fast-tracked more than $8 billion in weapon sales to Saudi Arabia and its allies, as well as whether Pompeo made a staffer run personal errands for him. House Speaker Nancy Pelosi (D-Calif.) said Sunday that Trump’s firing of Linick “could be unlawful” if it was intended to retaliate against one of his investigations.

“I don’t know him at all. I never even heard of him,” Trump said of Linick on Monday at an event at the White House, adding that Pompeo should have fired Linick a long time ago since “he’s an Obama appointment, and he had some difficulty.”

Linick’s ouster prompted a letter to Trump from Sen. Chuck Grassley (R-Iowa), a longtime advocate of inspectors general, urging the president to detail the reasons behind his removal. Grassley said Trump’s claim that he lost confidence in Linick was “not sufficient” as an explanation.

“Inspectors General help ensure transparency and accountability, both of which are critical for taxpayers to have confidence in their government,” Grassley said in the letter. “They should be free from partisan political interference, from either the Executive or Legislative branch.”

Grassley requested the Trump administration provide a fuller explanation within 30 days. The senator made a similar written request of Trump after his removal of Michael Atkison as intelligence community inspector general over a month ago, in April. Trump has not responded to that letter.

At a Senate GOP policy lunch that Trump attended on Capitol Hill on Tuesday, Grassley asked the president about his legislation to lower prescription drug prices but Linick’s ouster did not come up, according to an attendee.

While Sens. Mitt Romney of Utah and Susan Collins of Maine tweeted about Linick’s ouster over the weekend, most of the GOP conference defended Trump over the matter.

“I’m not crying big crocodile tears over this termination. Let’s put it that way,” Sen. Ron Johnson (R-Wis.) said over the weekend in an interview on CNN’s “State of the Union.”

“I don’t,” Sen. Steve Daines of Montana said when asked if he had any concerns about the removal of the State Department inspector general.

“They serve at the pleasure of the president, and I take at face value [Trump] had valid reasons for making the move,” Tillis said.

Obama ousted Gerald Walpin, the inspector general of the Corporation for National and Community Service, in June of 2009. His removal elicited criticism at the time from some conservative outlets and Fox News, according to The Washington Post.

Sen. Bob Menendez of New Jersey, the top Democrat on the Senate Foreign Relations Committee, on Monday announced he intended to introduce legislation aimed at shielding inspectors general for the State Department and other foreign affairs agencies from removal.

The bill would limit the removal of inspectors general only for explicit cause, such as malfeasance, misuse of funds, abuse of authority or violation of the law.

“I am increasingly concerned that it appears Inspector General Linick was targeted and removed by President Trump and Secretary Pompeo simply for doing his job,” Menendez said in a statement.