The Justices of the U.S. Supreme Court declared the pandemic of the autocrat must come to an end.

Whether it has been governors or mayors, presidents or admirals, the disturbing aggrandizement of power in a very few ought to trouble any American committed to freedom, especially religious freedom. Thursday’s high-profile ruling enjoining the Biden administration’s efforts to federalize the private workforce should put an end to that once and for all.

Last week, the Supreme Court of the United States heard arguments concerning the “emergency” standard imposed by the Occupational Safety and Health Administration (OSHA) at the insistence of President Joe Biden. In its 50-year history, OSHA has only issued such standards ten times. Only one survived legal challenge.

But this mandate was somehow worse.  As the Justices noted in their per curiam opinion, “It is telling that OSHA, in its half century of existence, has never before adopted a broad public health regulation of this kind—addressing a threat that is untethered, in any causal sense, from the workplace.”

OSHA’s standard makes sweeping pronouncements on matters of public health, which one would expect if that agency were tasked with monitoring the public health. It is not. Rather, President Biden, through OSHA is attempting to federalize the American workforce.  By use of central planning, he is regulating private business—including religious organizations.

“Permitting OSHA to regulate the hazards of daily life—simply because most Americans have jobs and face those same risks while on the clock,” the Justices wrote, “would significantly expand OSHA’s regulatory authority without clear congressional authorization.” 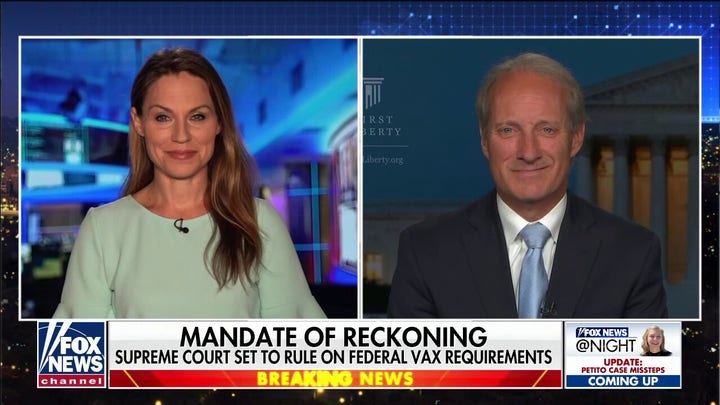 President Biden’s mandate is authoritarian and offensive to the U.S. Constitution.  It violates the Constitution’s commerce clause by regulating parts of the economy reserved to the police powers of the 50 states. It claims authority that it does not have and has not been given by Congress. Worse, it tramples the First Amendment by forcing religious employers to violate their religious mission by forcing their employees to violate theirs.

Separation of powers, federalism, and religious liberty mean precious little if a president can pronounce kingly edicts and demand he be obeyed.

Such an inflexible mandate is also illogical, defying commonsense. The mandate seeks to take emergency action, but OSHA took almost two months to create and issue the “emergency” order—offering no termination date for when the “emergency” will end. It says that the COVID shot is necessary to protect every American worker, but then exempts employers with 99 employees or fewer. OSHA unilaterally declares that COVID-19 poses a risk to every employee in every workplace, while admitting that not every employee in every workplace will face the threat of COVID-19 while at work.

A police officer maintains a watch during a demonstration by victims of gun violence in front of the Supreme Court as arguments begin in a major case on gun rights on Nov. 3, 2021 in Washington, D.C.  (Photo by Joshua Roberts/Getty Images)
(Joshua Roberts)

And, perhaps most illogical, OSHA’s draconian rule suggests that the extreme measure is necessary because COVID-19 presents a grave danger to every American employee, but then declares that the 78 percent of those 12+ who are vaccinated face little to no danger at all!

If President Biden is so committed to this mandate, the Justices suggest he has a built-in solution: take it to Congress—both houses of which his party controls. The fact that he has not reveals either that he cannot lead even his own political party or he has become drunk on the same drink of raw power we have seen throughout this pandemic.

Watch for President Biden, already famously out of patience with those who have declined the COVID shot, now loses his patience with the Justices who have reminded him of his rightful place under the Constitution. The president and his far-left allies always default to the autocracy of the administrative state summoned by “a phone and a pen” and threats of “pack the court.”

For now, the American work force—including its religious employers—is safe from the unnecessary threat of its government trying to help.