Tilray and Aphria agreed to combine their operations, forming a new giant in the fast-growing cannabis industry.

The all-stock deal, which puts together two of the market's best known names, will create an entity with an equity value of about C$4.8 billion ($5 billion), according to a statement and interviews with Tilray and Aphria leaders. The combined group's 12-month sales of C$874 million surpasses that of industry leaders such as Curaleaf Holdings and Canopy Growth. 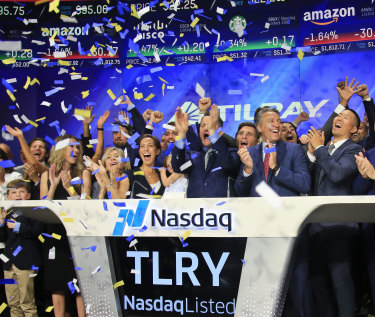 Tilray shares are up more than 24 per cent after the deal.Credit:AP

The new company will keep Tilray's name and trade under its ticker on the Nasdaq, and Aphria shareholders will own 62 per cent of Tilray's stock under the terms of the transaction, which was characterised as a "reverse acquisition of Tilray." Ontario-based Aphria will pay a 23 per cent premium to Tilray's December 15 closing price of $US7.87.

"I realised that Aphria needed to expand out of Canada, and merging with Tilray was a great answer because it's a US-domiciled business with great international assets," said Aphria chief executive Officer Irwin Simon, who will be chairman and CEO of the combined group.

Aphria gained as much as 15 per cent in pre-market trading, while Tilray rose as much as 33 per cent. Other cannabis stocks also jumped pre-market, with Sundial Growers gaining 8.8 per cent and Aurora Cannabis climbing 6.3 per cent.

The deal reinforces that cannabis, still seen by some as a fringe investment, is a fast-evolving sector as more US states legalise the substance and an increasing number of European countries open up to its medical use. The industry has seen a flurry of deals as companies jockey for position amid rapidly changing rules. Tilray and Aphria's combined assets represent an early step toward that goal of creating a global cannabis operation.

Tilray CEO Brendan Kennedy will become a board member of the combined company. Kennedy and Simon first met in 2018, but the financial courtship only began this year. It was carried out over texts and calls due to COVID-19 lockdowns that made face-to-face meetings difficult.

The new company will sell cannabis products across Canada and "be well positioned to pursue growth opportunities" such as medical marijuana in Germany. The companies said Tilray's Portugal production facility will allow tariff-free access to the European Union.

Simon and Kennedy said the deal better positions them to take advantage of potential US federal legalisation and is also built on the prospect of more legalisation in Europe. Kennedy said Aphria's two assets in Germany – a distribution centre for medical prescriptions and a cultivation facility — were particularly attractive.

"We felt with this deal, we could not only win in Canada, but win in Europe," he said.

A combination of beverage assets will also result. Aphria had earlier agreed to acquire US craft beer company Sweetwater Brewing Company, which makes cannabis-infused beverages, and Tilray is a partner of Anheuser-Busch InBev. The combined US operations will focus on Sweetwater and Manitoba Harvest, which makes branded hemp and CBD products.

Simon said there's an interest in using Tilray's beverage facility in Canada to get Aphria into making drinks that contain THC, which is the active ingredient in cannabis.

"The combined company is expected to have a strong, flexible balance sheet, cash balance and access to capital giving it the ability to accelerate growth and deliver attractive returns for stockholders," according to a joint statement.

The firms say the tie-up, which needs shareholder approval from Tilray, will reduce annual costs by about C$US100 million before taxes within 24 months of completion. The agreement, which is expected to close in the second quarter of 2021, includes a right to match higher bids and a reciprocal termination fee of C$65 million under certain circumstances.

BNN Bloomberg Television earlier reported that Aphria and Tilray were in advanced talks. Through Tuesday's close, Tilray shares have fallen 54 per cent in 2020, while Aphria's have risen 56 per cent.

The European market will grow to $US359 million ($474 million) in 2020, up 25 per cent from 2019, according to Brightfield Group, a cannabis consulting firm. The US remains the biggest prize, however. With its widespread recreational use, it's expected to represent 70 per cent of the world's $US93.8 billion market by 2025, according to Euromonitor International.

As cannabis growth accelerates in North America, so has consolidation. While Canadian firms had an initial advantage given pot's legal status there, their US peers have recently gotten a boost as states move steadily toward legalising recreational use. The incoming administration of President-Elect Joe Biden is also seen as improving the likelihood that the US will legalise on the federal level and give US companies that already operate in multiple states a larger market

Canadian companies, meanwhile, could have difficulty tapping into the US market and have started looking overseas for growth.

Bill Kirk, an analyst at MKM Partners, said in a research note that the deal makes sense because Tilray gives Aphria better access to the US and Europe, while Tilray, which last month agreed to convert $US124.3 million of senior notes, gets help improving its balance sheet.

But on the downside, cutting costs "may be more difficult than envisioned" and the access to the US market "could take longer to materialise than some believe," Kirk said.