The moment Virgin Australia pilot Tracey Haynes felt the full gravity of her situation was when she was lucky enough to secure a casual job stacking shelves at Woolworths.

"When I got my job at Woolies, my kids couldn’t understand why I was crying," Haynes says. "They thought: well you got a job mum, isn’t that what you wanted? And it is and I’m incredibly lucky. But the thing that brought a tear to my eye is that this is real. This is really happening." 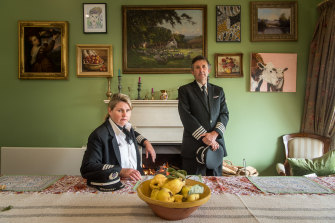 Tracey and Richard Haynes have worked for Virgin for 17 years. Their careers and the airline’s future is now in doubt. Credit:Justin McManus

The Boeing 737 pilot and her husband Richard, who trains and examines Virgin's Airbus 330 pilots, are two of 8000 employees Virgin has stood down as it fights for survival. The coronavirus pandemic has thrown Australia's number-two airline into financial turmoil and it has asked the Morrison government for a $1.4 billion loan to ensure it comes through the crisis.

The pleas for assistance have so far fallen on deaf ears and it appears increasingly likely Virgin will collapse unless the government or a white knight investor comes to the rescue.

From their home near Daylesford in Victoria, where they live with their three children aged five, nine and 11, Tracey and Richard fear they may never fly again. "We are genuinely scared we’ll lose our home, the children won’t go to the school they go to [now], and we really don’t know what we would do," Tracey says. 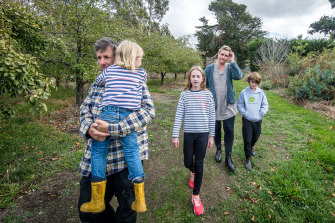 Richard and Tracey Haynes, pictured with their children Elizabeth, William and Andrew, have picked work on a farm and at a supermarket while stood down from Virgin. Credit:Justin McManus

Their shared infatuation with flying started with light aeroplanes as teenagers. Richard, who is from a family of pilots in Brisbane, flew for Ansett until it closed in 2002 and then for EVA Airlines in Taiwan. Tracey learnt to fly as a schoolgirl in Geraldton in Western Australia, and went on to fly for the Pilbara mining industry. She later operated jets out of London for Thomas Cook.

After their flying careers took them to the other ends of the globe, it was the opportunity to work for Virgin – then known as the plucky budget upstart Virgin Blue – that brought them back to Australia in 2003.

A month in a classroom together training for their new jobs as Virgin pilots and "winking at each other" set the groundwork for the next 17 years of their personal and professional lives. Both now hang in the balance, as Virgin's fate is potentially decided as soon as next week.

Richard says that while he found another airline job shortly after Ansett's collapse, he doubts that will be an option if Virgin stops flying because every airline in the world is reeling from the pandemic. For the same reason, the couple is not counting on Virgin being revived from collapse or a new airline setting up in Australia anytime soon.

"There is nowhere to go and that’s a little bit scary because we’re very unique in what we do. I can fly an A330 and that’s all I do," says Richard.

To tide them over while stood down without pay, Richard, at age 53, has started labouring on a neighbour's farm. Tracey counts herself "incredibly lucky" to have her supermarket job, but it also prompted a bittersweet reflection on her career. About 6 per cent of Australian pilots are women, and around 3 per cent are globally. "For the first time ever it really made me realise how hard I had actually worked to get where I was," she says.

"I was an airline pilot for over 20 years and started back at a time when it wasn’t particularly fashionable [for women] to be getting these jobs. It has been a hard road… and then all of a sudden it’s taken away through no fault of our own. You can’t help but feel like a complete failure.”

Before the pandemic, Virgin employed close to 10,000 people including 1500 pilots. Since the crisis broke out Virgin has announced 1000 redundancies, including all 220 pilots at its low-cost arm Tigerair.

Amid growing debate in Canberra around government intervention, Prime Minister Scott Morrison this week again said that any government financial help had to be for the whole aviation industry, not just Virgin. He said on Thursday be believed a "market-based option" was in the works and also said that union-aligned superannuation funds should step in and save the company.

In pushing for government help Virgin says it's not just its own future at stake. The airline argues its air capacity and competition it provides against Qantas is vital to the tourism industry, which employs more than 600,000 people, and will be especially vital for the economy coming out of the coronavirus shutdown.