Israel is celebrating the Shavuot holiday this week. It’s a festive celebration when Jewish families gather for dairy meals and stay up all night to learn Torah and eat cheesecake.

In preparation, families run to grocery stores to do their shopping. This week, it’s an activity that requires a risk assessment.

Recent days have brought fighting at a level unseen since Israel’s War of Independence in 1948. In addition, there is a national feeling of malaise from two years of no government and no national budget. And the nation appears to be sliding toward what will be its fifth election in two years.

As a nation, the missiles wake us from our slumber in the middle of the night, but it is the images of Israelis attacking Israelis that prevent us from going back to sleep.

America Talks:  Take the survey and register to participate now

It might be hard to imagine how people can celebrate at a time like this, but this is Israel — the nation that has mastered the art of eternal optimism. As Israel’s founding prime minister, David Ben Gurion, famously said, “Israel is a nation where believing in miracles makes you a realist.”

Take holiday shopping, for example. We have learned that missiles come in volleys and that after waiting for an appropriate amount of time (10 minutes after the sirens stop to allow debris from the collision of Hamas missiles with the Iron Dome to hit the ground), one can go out to shop safely.  As long as one doesn’t tarry. 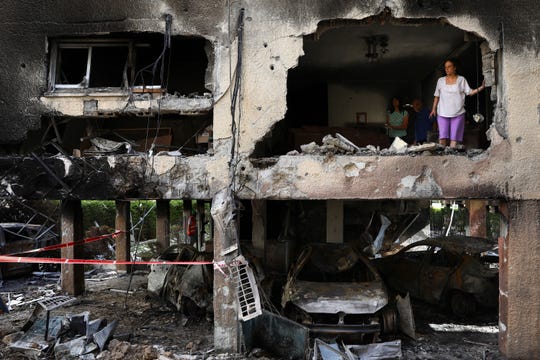 A family inspects the damage to their apartment after it was hit by a rocket fired from the Gaza Strip over night in Petah Tikva, central Israel, Thursday, May 13, 2021. (Photo: Oded Balilty, AP)

Our family is in Ra’anana, a bedroom community about 12 miles north of Tel Aviv. After seeing a missile land four blocks from our son’s dormitory at Bar Ilan University outside of Tel Aviv, we debated how and when we might be able to safely pick him up and bring him to us.

Explosions resound in the distance

Not that we are out of missile range ourselves, but at a time like this, parents just want to put their hands on their kids.

As we sat together on the balcony under clear skies with a cool breeze blowing in from the Mediterranean, we reveled in the momentary escape from the news of the day. As we worked our way through the amazing desserts, we heard the sounds of muffled booms in the distance.

It sounded like thunder in the distance, but, on a cloudless night, that was not possible. We knew what it was, but without uttering a word, we each concluded that with no air raid siren, the threat must be distant.

We may have to run to the shelter later, but for now there is cheesecake and at the least, a believable and welcome, if not self-delusional, normalcy.

In Hebrew, we have an expression, “Gam Ze Ya’avor.” It means “this too shall pass,” and it can be equally applied to both good and bad times.

It also works well when recalling that in the 3,000 years since we received the Torah on Mount Sinai, there have always been those who rose up to smite us and all thankfully failed. “Tonight will be no different,” we say to ourselves.

For those in the south, where the missiles have been the most unrelenting, taking a similarly sanguine approach is not possible.  The combination of Torah and cheesecake took place there in crowded bomb shelters while the booms outside could not possibly be confused with anything but Hamas missiles.

For people in Lod, where Arab-Israeli mobs have burned synagogues to the ground, there is a dual fear of leaving one’s house to face hoodlums in the street as well the threat from missiles above.

For Arab-Israelis finishing Ramadan, there are communities where Jewish mobs of hoodlums brought fear to their holiday experiences even as they too face the threat of Hamas missiles.

Hope for ceasefire to bring peace

As Islamic and Jewish leaders increasingly call on the relative handful of hoodlums to cease their violence in the streets, more Arabs and Israelis are reaching out to each other to clean up the mess. And we hope a ceasefire will soon restore peace to the citizens of Israel and Gaza.

All of this in the space of little more than a week. It gives hope that once the current fighting stops, our neighborliness will last longer than it has in the past.

Some pessimistically proclaim that this would take a miracle. That’s OK, because as Ben Gurion said, in this part of the world, that is what we call a realist.

You can read diverse opinions from our Board of Contributors and other writers on the Opinion front page, on Twitter @usatodayopinion and in our daily Opinion newsletter. To respond to a column, submit a comment to [email protected]